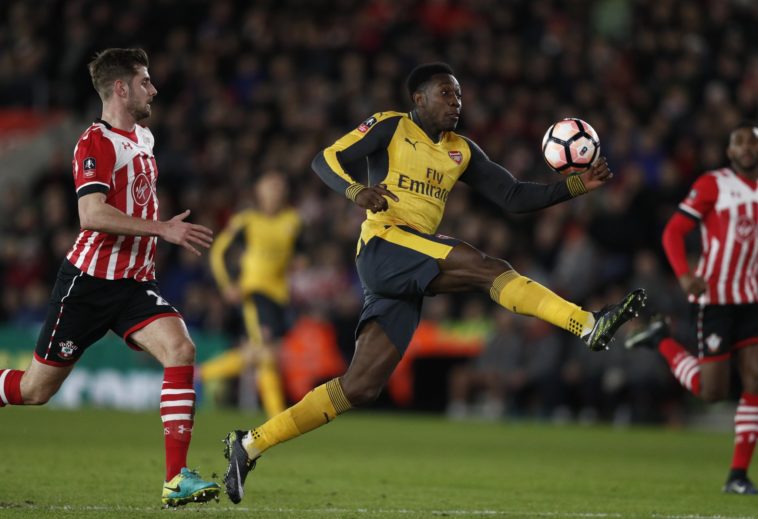 Arsenal had to overcome Southampton at St Mary’s in order to progress to the fifth round of the FA Cup. The Saints defeated Arsenal on their way to the EFL Cup final this season, so Arsenal had a point to prove.

Arsenal quick out of the blocks

The Gunners have been starting games slowly the last few weeks, but today was different. They forced two corners in the opening five minutes and Lucas Perez nearly found the returning Danny Welbeck.

In the 15th minute, Lucas Perez did manage to find Danny Welbeck, whose fantastic finish gave Arsenal a deserved lead. Seven minutes later, Welbeck was in again. He was first to Alex Oxlade-Chamberlain’s long-range pass and made it 2-0 to Arsenal. For the first time, Welbeck had scored twice in an FA Cup game. What a way to make your first start after 265 days!

Arsenal were in full control with a two goal lead and try as they might, Southampton couldn’t have as much of an impact on the game as they would have liked. In the 24th minute Pierre-Emile Hojbjerg blazed over the bar on the volley. A few minutes later they had their best chance. Shane Long’s powerful drive was on target but Ospina made a brilliant save and forced a corner. Then Long was brought down by Kieran Gibbs but Hojbjerg’s free kick was wide.

Theo Walcott got on the scoresheet in the 35th minute when Welbeck turned provider, leaving Walcott with tap-in. Two English goalscorers and three goals from three shots. A clinical performance from Arsenal.

Youngster Josh Sims had a chance to score for Southampton just before half-time but his first touch was poor and Arsenal went into the break with three goals and a clean sheet. The Saints had plenty of work to do in the second half.

More of the same from the Gunners

The second half saw Arsenal picking up where they left off. Welbeck and Perez linked up yet again and the returning Englishman could have had his hat-trick. Bellerin also had a chance but it was collected by young Southampton keeper Harry Lewis.

With just over an hour played, both teams made changes. Claude Puel made a double substitution with Redmond and Tadic coming on for Isgrove and Long. Welbeck was denied the chance of a hattrick as he came off for Arsenal and was replaced by Alexis Sanchez.

Walcott marked his return with another goal, this time from a cross by Sanchez who had only come on a few minutes earlier.

Arsenal’s second change of the match was to take off Jeff Reine-Adelaide and bring on Alex Iwobi. With four goals scored and a Southampton side that had barely threatened all game, Arsenal were happy to just run down the clock.

There was five minutes of normal time left when Sanchez played a square ball to Walcott who converted it with ease to complete his fifth hat-trick for Arsenal.

The match finished 5-0. Every Arsenal player showed an intensity and hunger that has been missing from their game in recent weeks. Southampton fielded a young squad, but Arsenal were better in all areas of the pitch. Theo Walcott and Danny Welbeck will be delighted with their goals as Arsenal sail into the fifth round of the FA Cup.

For the first time in the competition’s history, Arsenal won six consecutive away FA Cup matches.

Maybe Arsene Wenger should be in the stands every week?