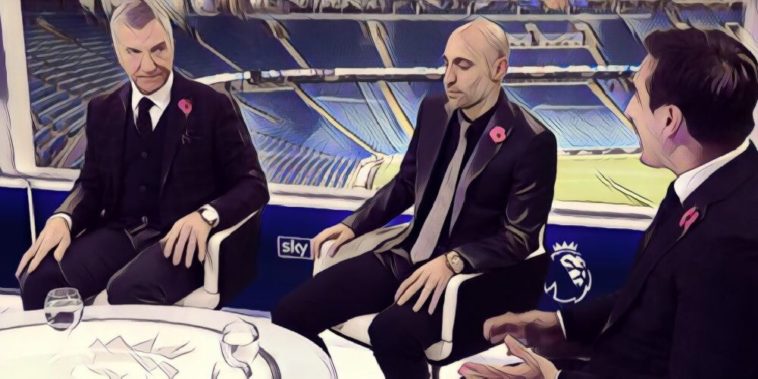 Is Jose Mourinho getting the best out of Manchester United? That was the question that was asked over and over and over again from Graeme Souness in the wake of United’s 3-1 humbling in the Manchester derby, in what developed into a heated debate with Gary Neville.

Premier League champions and current league leaders Man City were dominant throughout Sunday’s encounter at the Etihad, with a second-half penalty for United being the only shot on goal the men in Red could muster.

After the game in the Sky Sports studio, Graeme Souness re-started the regular Jose Mourinho debate, suggesting he was not the man to lead Manchester United forward, and in the process, clearly winding Gary Neville up.

Here is the full transcript of their heated debate…

Souness: A simple question. Any manager who goes into a football club is given a group of players. The question that you, as a Manchester United supporter has to ask yourself, is the manager and the coaching staff getting the best out of the group of players at Man United. It’s a simple yes or no. What is it?

Souness: You don’t know? You’ve watched that game of football today and, as a Man United supporter, you think that is acceptable?

Neville: No, I don’t think it’s acceptable in any way, shape or form.

Souness: So I come back to the question again, do you feel that he is getting the best out of that group of players?

Neville: Graeme, I’ll ask you a question. Who would he have put in midfield today out of the players that he’s got that would have improved it?

Souness: No, no, no. We are getting into the specifics. Simple question: you look at the names that play for Manchester United. Think of Alexis Sanchez for example’s sake. Is he playing anything like he was at Arsenal? The answer is no, a big no. Is Marcus Rashford playing like he can? Is Romelu Lukaku? Is Paul Pogba playing like he has performed? The answer is no, he is not getting the best out of that group of players.

Souness: Come back to my question. This feels like Question Time! Yes or no, are they getting the best out of that group of players?

Neville: I’ll answer it the same again… I don’t know. I’ve seen Louis van Gaal with a lot of these players and I didn’t like what I saw with that. He was a coach, somebody who would play passes. My view is that at this moment in time, Manchester United don’t look like they can win a game proactively. They finished second last season, which was the best finish since Sir Alex Ferguson. I’m not defending Jose Mourinho but if you’re asking me the question could another manager get more out of them then maybe. But maybe not. I don’t know if the players are good enough Graeme, I haven’t got a clue.

Souness: These players have been top players at other clubs.

Souness: I would think…

Neville: Anthony Martial’s not been a top player at another club.

Souness: I think most people would say Alexis Sanchez was. He can perform better. Lukaku is one.

Neville: Lukaku’s not been a top player at Everton.

Souness: I think he was showing more at Everton than he is at United.

Neville: He went missing in every big game for Everton.

Souness: I think there is a real player in Martial.

Neville: So do I.

Souness: And I think Rashford is better than what he’s showing.

Neville: If you ask me if Ashley Young is playing the best he could possibly play then yes. Is this the Chris Smalling we’ve seen for the last few years? Yes. Victor Lindelof is playing better than he has ever played. David De Gea is not. It is so confusing when you watch Manchester United. What would you change? If you were going in there as manager tomorrow, what would you change?

Souness: I would ask the midfield players to start playing one and two-touch. You don’t want to be a striker in that team.

Neville: Do you think they can play one and two-touch? Ander Herrera and Marouane Fellaini?

Souness: I’d be demanding it.

Neville: Fellaini can’t play one and two-touch in midfield.

Souness: As long as you think it’s acceptable for them to turn up in this stadium today and play like that.

Neville: I don’t think it’s acceptable, Graeme, for them to lose any game at all. I’m a Manchester United fan and I was built on them playing fantastic football

Neville: I didn’t like the football under Louis van Gaal either, Graeme. Or under David Moyes.

Souness: In 10 years they have travelled a long way in the wrong direction.

Neville: I know., but is it one man’s fault? Is it a manager’s fault or is it an issue?

Souness: No, it’s a collective thing. Of course it is, but there’s no point turning around and saying they’ve not invested enough money in the team and it’s no good saying that group of players can’t play better than that because they can.