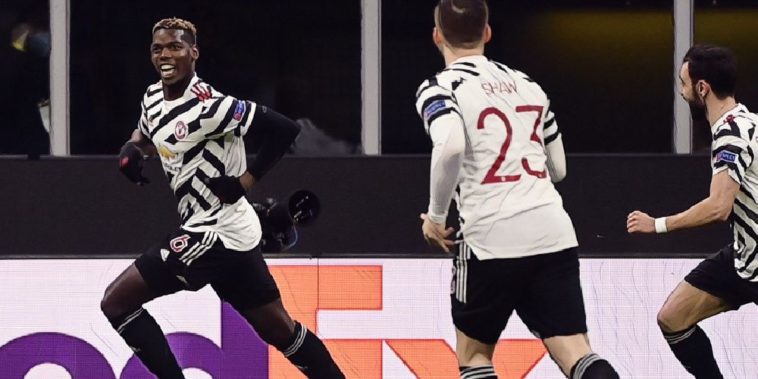 Manchester United booked their place in the Europa League quarter-finals, beating AC Milan in 1-0 in the San Siro courtesy of a goal from the returning Paul Pogba.

Despite having midfield duo Donny Van de Beek and Pogba once again fit and available, Solskjaer opted for an unchanged starting XI for the trip to Milan, the tie finely balanced following Simon Kjaer’s late equaliser in the first-leg last week.

Much like the game at Old Trafford, it was the Serie A side who took control of the opening period, with United struggling to create anything of real note against a stubborn opposition defence.

One rare breakaway saw Daniel James through on goal, yet the Welshman opted to go alone rather than playing in teammate Mason Greenwood, with on-loan Chelsea defender Fikayo Tomori making a fine recovery challenge to keep the game level.

The hosts began to threaten Dean Henderson in the United goal as the half wore on, the Englishman forced to parry a curling effort from Alexis Saelemaekers, while Rade Krunic flicked his effort wide on the stroke of half-time following good work from Samu Castillejo on the right flank.

The interval saw Manchester United make what looked like an enforced change, Marcus Rashford replaced with the returning Pogba, only for the Frenchman to make an almost instant impact to fire home excellently from close range after some penalty area pinball.

11 – Dean Henderson has kept 11 clean sheets in just 18 appearances for Man Utd in all competitions this season, one more than David de Gea has registered in 29 games (10). Opportunity. pic.twitter.com/wSpt0vinaX

The visitors looked much brighter following the goal, although had to rely on their goalkeeper to make a crucial save with 20 minutes to go, Henderson keeping out former Red Devils forward Zlatan Ibrahimovic, the Swede having risen well to produce a strong header.

The entrance of the enigmatic striker did add an extra dimension to the home side’s attack, although they never truly threatened the United goal, Henderson with a few fine interventions late on as Solskjaer’s men held on to clinch victory.

That result sees United progress into the quarter-final’s for the second season running, the Norwegian admitting that he is ‘confident’ about his side’s chances of winning the competition following their positive performance against one of the competition’s strongest opponents.

“Very happy of course,” he told BT Sport. “We’ve come through a very difficult tie against a fantastic club and we’ve overcome some difficulties.

“You give yourself a chance to win a game of football when you keep a clean sheet. Dean Henderson made a fantastic save towards the end and I’m very pleased with everyone’s defending. We know the back six, with the likes of Scott McTominay and Fred, always give everything.

“There are many good teams left but you’ve got to be spot on. It’s a cup competition and anything can happen. But we are through and we feel confident.”

In truth, it was the arrival of Pogba at half-time that really gave United a much-needed lift, with Solskjaer full of praise for the World Cup winner on what was his first appearance since early February.

No Man Utd player had more shots (3) or created more chances (2) vs. Milan than Paul Pogba.

The match-winner only came on at half-time. 🙌 pic.twitter.com/wWkRSwHJKG

“We’ve missed Paul,” Solskjaer admitted. “He’s been out for almost two months and any team would miss a player like Paul Pogba. He is very important for us and he’s going to give us a big boost. He makes a very, very big difference to us.”

The Red Devils final game prior to the international break is an FA Cup quarter-final clash with Leicester City on Sunday, the competition another chance for silverware this season.

“We are looking forward to Sunday, it’s another quarter-final, so will just dust ourselves down and go again.”