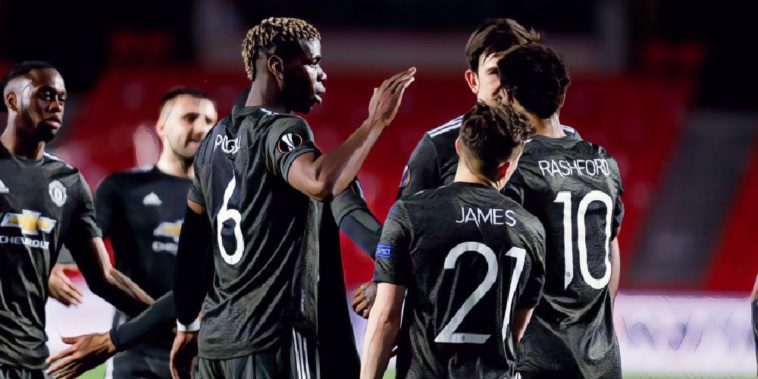 Manchester United boss Ole Gunnar Solskjaer has reacted after the Red Devils laboured to an important  2-0 win over Granada on Thursday evening in the Europa League.

Solskjaer made just three changes from the side that edged past Brighton at the weekend, the most notable alteration seeing David De Gea return to the starting lineup for the first time since the goalless draw with Chelsea at the end of February.

Although United were the overwhelming favourites against a Granada side playing in their first-ever European quarter-final, it was the hosts who made the brighter start, with the Red Devils struggling to break down a stubborn backline.

Despite not quite being at their free-flowing best, it was the Premier League side who took the lead midway through the first-half, Victor Lindelof’s excellent lofted pass picking out Marcus Rashford, who burst clear, took a lovely touch to control it, before cooly slotting past ‘keeper Rui Silva, the Englishman having initially been a doubt for the tie due to injury.

The hosts were not too disheartened by falling behind, however, as they produced arguably their best spell of the match just before half-time, Chelsea loanee Kenedy seeing his volleyed effort comfortably saved by De Gea, while former Tottenham man Roberto Soldado slashed a strike wide after a well-worked corner.

The game struggled to really ignite after the interval, with the La Liga side failing to create anything of any real note, while United appeared relatively content with a 1-0 scoreline away from home.

After very limited goalmouth action in the second period, the visitors were then awarded a penalty in the 90th minute after Bruno Fernandes looked to have been caught by substitute Yan Brice Eteki, the Portuguese midfielder stepping up to somewhat unconvincingly slot home, the ball somehow squirming through the gloves of Silva.

Marcus Rashford is the first Manchester United player to score 20+ goals across all competitions in back-to-back seasons since Wayne Rooney. 🤩 pic.twitter.com/GgbI2pT6Q9

That 2-0 victory leaves the Red Devils well placed to reach a fifth cup semi-final under Solskjaer, the Norwegian admitting that while it wasn’t a ‘perfect night’, he was pleased to get the result.

“It was not a perfect night,” he told BT Sport. “We got three yellow cards and three suspensions. 2-0 is a very good result. We know how difficult it is to come to Spain. We’ve got to play well to get a result.”

On a night in which United struggled to really catch fire, it was arguably Solskjaer’s two most reliable figures – Rashford and Fernandes – who got on the scoresheet, with the former Molde boss full of praise for the two goalscorers.

“They have been exceptional, so important for us. It was a very good run by Rashford, takes the ball fantastically. Bruno is so confident on penalties even though the keeper almost saved it.”

Those two away goals have left United well placed to progress to the semi-final’s, although the 48-year-old was wary of letting any complacency slip in as he revealed his side’s approach to next week’s second leg.

“Same as always,” he said. “We want to win every game. It’s still a young team, a learning team. We have to improve all the time. Football catches you so quickly if you rest. We can’t have any other approach.”

Next up for United is a game against Tottenham Hotspur in the Premier League on Sunday, the Red Devils having suffered an embarrassing 6-1 defeat when the two sides met earlier this season.