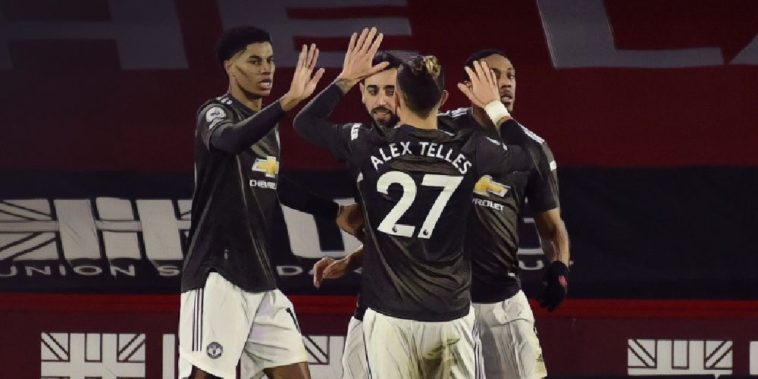 Ole Gunnar Solskjaer was full of praise for his side’s display as Manchester United once again came from behind away from home to see off a resilient Sheffield United side still in search of a first Premier League win.

The Blades went into the match at Bramall Lane with just one point from their opening 12 league fixtures and in dire need of a positive result, while United were looking to earn a sixth consecutive away win of the season.

Their previous five league meetings away from Old Trafford have seen them come from behind to earn victory, and against Chris Wilder’s side they once again fell behind inside five minutes. Former Blades ‘keeper Dean Henderson gifted his old side an opening on what was a rare start for the England international, Oli Burke charging down the Manchester United stopper to force the mistake before teeing up David McGoldrick to slot home into the empty net.

The hosts squandered a glorious opportunity to double their lead as midfielder John Fleck saw his curling effort miss the target, before Solskjaer’s men struck an inevitable equaliser. Marcus Rashford latched onto a fine lofted pass from Victor Lindelof, expertly controlling the ball before smashing past Aaron Ramsdale.

United hauled themselves ahead seven minutes later, with Paul Pogba finding compatriot Anthony Martial with a delightful sweeping pass and the forward poked home after Ramsdale failed to deal with the bouncing ball in the box.

That lead was extended early in the second-half after a superb flowing team move from the visitors, with Rashford the man once again on hand to apply the finish past Ramsdale, who again definately should have done better as the ball went underneath his body.

Man Utd have now come from behind to win each of their last six Premier League away games:

Comeback FC do it again. 😅 pic.twitter.com/jmT9mKUmyy

The game looked to be heading for a comfortable win for Solskjaer’s sise, though the hosts weren’t quite dead and buried, with a Blades corner somewhat fortuitously ending up in the back of the net, Lindelof’s headed clearance hitting the head of McGoldrick and going in with just three minutes left to play. Despite their late rally, the home side couldn’t quite grab an equaliser, ensuring they now face the embarrassment of suffering the worst start to a league season in Premier League history.

As for Manchester United, their win moves them up to sixth in the table and just five points behind leaders Liverpool with a game in hand, and boss Solskjaer revealed he was delighted with the quality of his side’s goals, while also admitting his side need to replicate such form at Old Trafford, with rivals Leeds United to come on Sunday.

1 – Sheffield United have won fewer points after their first 13 games of a league season than any other team in English top-flight history (one). Blunted. pic.twitter.com/v1mTz6snfm

“It could have been more comfortable,” Solskjaer told Amazon. “We were a little sloppy at 3-1 up. The corner that led to the second goal wasn’t corner but when it goes in it was really difficult because they are a handful.

“I thought all three goals were excellent. I wanted to test them here today, we knew it was going to be a physical test. The fight, we are going to get kicked. It is one of these games the boys will learn from.

“We need to sort the home form. It is not like it is home and away with these conditions without fans. We should be more used to the Old Trafford pitches than these pitches. Sunday is a massive game, we have been waiting for years and we will be ready for it.”

The United boss was also asked about Dean Henderson’s performance, the young ‘keeper suffering a sloppy start before producing a vital save late on from Lys Mousset, with Solskjaer praising the player’s character despite his mixed fortunes.

“The good, bad and the ugly, maybe in a different order. He is always learning. He has probably been looking forward to coming back here and to get from that start shows his character for the rest of the game.