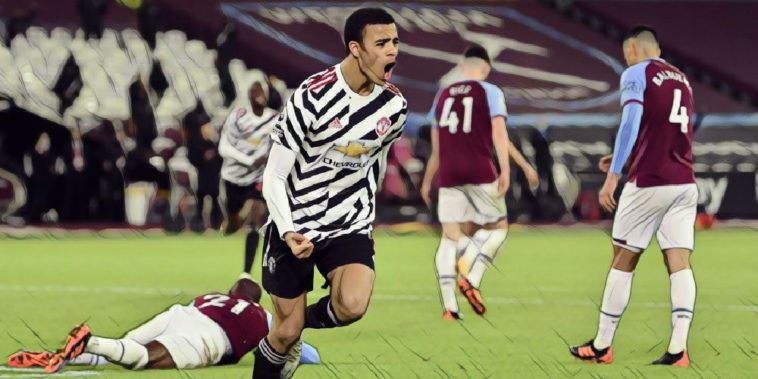 Manchester United scored three goals in 13 second half minutes to once again come from behind to beat West Ham United in front of 2,000 fans at the London Stadium.

West Ham started by far the brighter, with Jarrod Bowen a particular livewire for the hosts, with Manchester United struggling to get any kind of foothold in the game with their passing distinctly sloppy.

Once again, as has been the case in all five Premier League away games, the Red Devils fell behind, and just like last week’s come back victory over Southampton, their 38th minute goal came from a corner as Declan Rice’s front post flick on found Tomas Soucek who poked home unopposed at the back post.

Almost instantly after the opener, David Moyes’ side really should have doubled their advantage, Sebastian Haller racing clear through on goal, rounding the keeper before somewhat comically losing his balance and falling over as an almost certain goal evaporated before his eyes,

Solskjaer made two changes at half-time, and after 65 minutes, this side hauled themselves level. A long punt upfield from Dean Henderson found Bruno Fernandes who held the ball up before squaring it to Paul Pogba. The Frenchman despatched a wonderful first-time curling effort past Lukasz Fabianski from 20 yards – though the footage seemed to suggest that the ball from the keeper may have drifted out of play.

Three minutes later and United were ahead, Mason Greenwood expertly controlling an Alex Telles cross, before firing low past the Polish ‘keeper.

United looked much more fluent in the second half, and with 12 minutes to play they had a third. Substitute Juan Mata played a sumptuous ball into the path of Marcus Rashford, who having already hit the post moments before, made no mistake at the second time of asking as he dinked the ball over Fabianski.

Speaking afterwards, the Norwegian admitted his side ‘struggled’ in the first half, while pointing out the quality of their opponents.

“Football is up and down,” he told Sky Sports. “First half we struggled to keep up with their counter attack and set plays. We gave the ball away too often. Poor first half, second half, of course, the goal changes the mood, the first one. Great goal by Paul, Mason’s goal – individual quality.

“We played against a team that had drawn with Manchester City and beaten Leicester and Wolves. They are a good team and make it difficult for you. I am very, very pleased with the performance. Last week we were 2-0 down at Southampton and this was a step forward, we were only one down.”

Despite what has been an inconsistent start to the season, the result lifts Manchester United up to fourth, sitting just two points behind league leaders, Spurs.

The Red Devils have the best away record in the division, winning all five of their fixtures and Solskjaer is keen to translate their form on the road to their games at Old Trafford, though admitted his side need to ‘improve’ on what was a wildly underwhelming first-half display.

8 – Only one player has created more chances in a single match in this season's Premier League than Bruno Fernandes did against West Ham today and the United midfielder only played 45 minutes. Conductor. pic.twitter.com/1LH5KWZqeS

“Of course you are very, very happy with the away form,” he said. “I think the home form is decent, we are becoming more and more consistent and we are coping better with games like this. When you are 1-0, 2-0 down the boys still believe and that character is important.

“At the end of the season you don’t care about the performance. At the moment we know there are things we need to improve on, some simple passes in the first half but the second half that quality came back and all three goals were exceptional.”

Next up for Solskjaer’s side is a tricky trip to RB Leipzig in the Champions League, before hosting Manchester City in the derby.