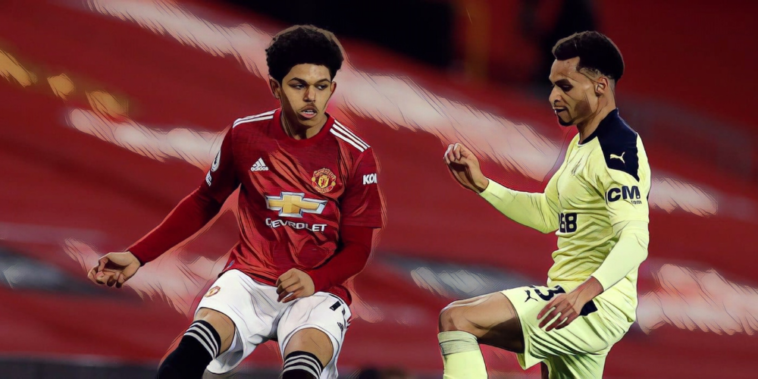 Ole Gunnar Solskjaer was full of praise for youngster Shola Shoretire, the 17-year-old having been handed his Manchester United debut in the 3-1 win over Newcastle on Sunday.

After impressing for the club’s u23 side this season, the teenage attacker was called up to the first-team in recent weeks and was included in the matchday squad for the 4-0 win over Real Sociedad in the Europa League in midweek, alongside fellow youngster Amad Diallo.

While the former Atalanta man was the one handed a late cameo appearance against the La Liga side, it was Shoretire who was awarded some Premier League minutes at the weekend, coming on in the 89th minute for fellow academy graduate Marcus Rashford.

The debut of the diminutive forward is just the latest example of the exciting talent that has been produced over the years in United’s famed youth set-up, with regular first-team player Mason Greenwood also breaking through in recent times.

The win over Steve Bruce’s side also continued the Red Devils’ excellent tradition of including an academy player in every matchday squad since 1938, with Solskjaer stating that it’s in the club’s ‘DNA’ to put faith in their young, homegrown talent.

“It’s in our DNA, it’s what we do at Man Utd,” Solskjaer said at his post match press conference.

“Shola has been training with us for a while, done really well and it was next step for him. A few players went out on loan which made the path for him shorter. I’m sure he’ll remember his five or six minutes.”

Although he wasn’t afforded too much time to impress in his late appearance, Shoretire is clearly a player tipped for big things within the club.

“He is a boy we believe in,” Solskjaer added. “We wanted to give him a little taste of it (playing in the Premier League).

“Of course the game was not done, still another six or seven minutes but he is a boy we believe in.”