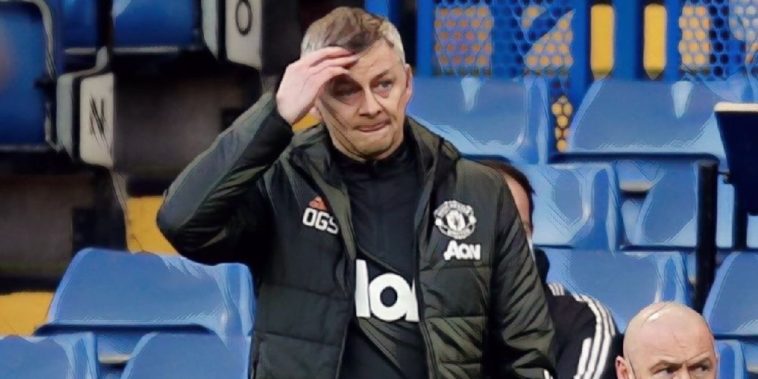 Ole Gunnar Solskjaer was left furious at the referee as Manchester United once again failed to win against a fellow ‘big six’ side, playing out yet another goalless draw against Chelsea.

Chelsea started the brighter and slicker as they looked to climb into the top four, though Manchester United looked a threat with the pace of Rashford, Greenwood, James and Fernandes upfront.

Manchester United would have a strong shout for a penalty turned down, video footage showing the ball appearing to strike Callum Hudson-Odoi’s raised arm inside the box, and despite referee Stuart Atwell being advised to review the pitchside monitor, he perhaps surprisingly opted to stick with his original decision.

Despite the lack of clear cut chances in the first half, it was actually a rather entertaining first 45 minutes, with both sides looking to press high.

Chelsea had the first big chance of the second period, Hakim Ziyech’s strike being met by the strong outstretched right arm of David de Gea, before Luke Shaw put in a fine block from Reece James’ effort from the rebound.

Both side’s enjoyed periods of attacking dominance throughout the game, though a combination of some organised defending and a disappointing final ball saw the two sides have to settle for the second goalless draw of the season.

Speaking afterwards, Ole Gunnar Solskjaer was perplexed by the decision not to award his side a penalty.

🧐 Would YOU have given a penalty for handball? pic.twitter.com/fy6ZoyaLU7

Luke Shaw had said in his post-match interview that the referee told Harry Maguire: ‘If I say it’s a penalty then it’s going to cause a lot of talk about it afterwards,’ and Solskjaer was asked about the alleged remark.

“I can’t say [what the referee said to the players] because that’s not going to be good for him. It’s not right, is it? All these outside influences, even the VAR talk before the game here on Harry. That’s cheeky when they put that on the website. That’s influencing referees. There’s loads of talk about us getting penalties when there is no doubt whatsoever. Today we should have had a penalty.”

Aside from the penalty controversy, Solskjaer was pleased with aspects of his side’s performance, but conceded that they weren’t good enough with the ball, the Red Devils so far winless in all of their games against the so-called ‘big six’.

2 – Chelsea and Manchester United have drawn 0-0 in both of their league meetings in a season for just the second time, having last done so back in 1921-22. Tepid. pic.twitter.com/oAcovquVu9

“Defensively, energy, application, attitude, pressing spot on. With the ball, not good enough. Not enough quality.

“We didn’t create the chances we hoped for. But towards the end, if you score on that breakaway that’s the perfect away performance – or if you get that penalty and win 1-0.”

Next up for United is a midweek trip to face Crystal Palace in the Premier League before facing league leaders Manchester City at the Etihad.

Read – Five of the Best games between Man Utd and Chelsea

See also – Tweets of the Week: Goal celebrations in slow mo, Pep’s jacket, and a touch of class