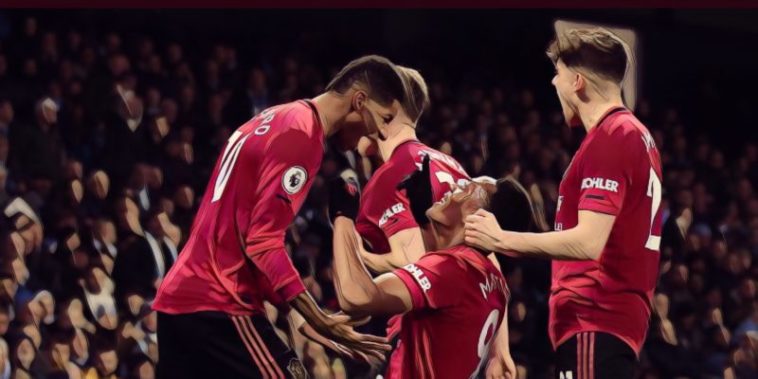 Manchester United ran out 2-1 winners over bitter rivals Manchester City this evening, after a hugely entertaining encounter at the Etihad.

Ole Gunnar Solskjaer’s side started confidently and soon found themselves creating clear cut chances, with Man City’s patched up backline unable to deal with United’s pace and precision on the counter.

By the time in-form attacker Marcus Rashford put Manchester United ahead from the penalty spot on 24 minutes few could deny that the visitors deserved their lead, and they would soon find themselves two to the good, via a tidy left-footed strike from Anthony Martial.

Despite Man City pilling on the pressure United held out resolutely until the 85th minute when Nicolas Otamendi powered home a header from a corner to set up a tense finish.

Guardiola’s men threw the kitchen sink at United in the final stages, but Solskjaer’s side held on for an impressive win, that sees the club remain in fifth place in the Premier League table.

Speaking after the game Solskjaer was delighted his side had done so well against a team he described as the best in the World.

“We’ll remember this one, we look so dangerous when we get he ball and go forward against arguably the best team in the world,” Solskjaer told BBC’s MOTD.

“They are an unbelievable team and to get a result and defend like we did and create as many chances…we should have been three or four up but for some good goalkeeping.

“It’s hard to take the ball off them. They can football teams to death but with the pace and threat we have, we look dangerous every time we go forward.

“It does not matter where you win the ball it’s that you are positive when you get it.”

Read: Rating every member of Manchester United’s fabled class of ’92