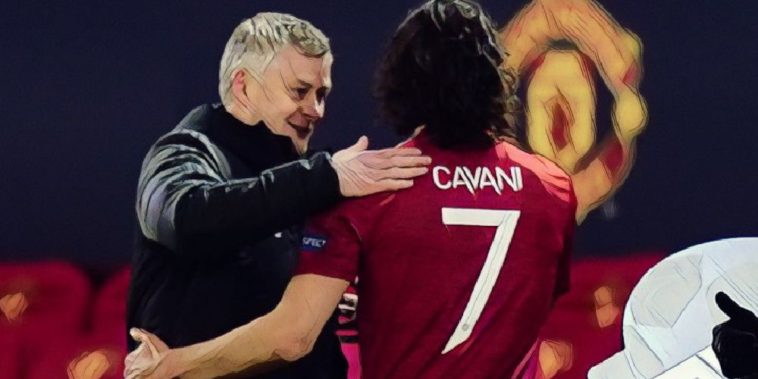 Ole Gunnar Solskjaer says he had no doubts over handing Edinson Cavani the prestigious number seven shirt at Manchester United and suggested the club are keen to extend the forward’s current deal.

Cavani signed for the Red Devils on a free transfer after leaving Paris Saint-Germain during the summer and has made a positive start, scoring three Premier League goals and providing a further two assists despite starting just one league fixture.

The Uruguayan came off the bench to provide an assist for Bruno Fernandes during the 2-2 draw at Leicester on Boxing Day, and Solskjaer says he regards the forward as much more than a game-changer from the bench.

“He’s definitely a starter. You don’t classify a player of that quality as anything else,” Solskjaer said at his pre-match press conference ahead of their game against Wolves. “We’ve got plenty of starters, more than 11 starters.

“When you’re at Man United you should believe in yourself and trust yourself. I trust him, I trust all my players and we’ve got good competition for places. He’ll probably start more games than he will not start.”

The shirt has however seemed cursed in recent years, with a number of high profile players flopping with the famed number on their back, though the Norwegian revealed he had no doubts about handing the 33-year-old an opportunity to write further history as Manchester United‘s latest number seven.

“He’s so meticulous and professional with his habits, everything about him shows why he’s had the career he’s had and, at the age he’s now, he’s still one of the fittest players we’ve got.“

The United boss also discussed the prospect of Cavani remaining with the club beyond the end of the season, the veteran having signed an initial one-year deal when arriving from PSG on deadline day.

United have an option to trigger a one-year extension in the deal and when asked on the possibility of that clause being activated, Solskjaer insisted that the striker has plenty left in the tank.

“At the moment he looks like he has a few years left in him so I wouldn’t say anything else,” he said.

“He’s been a great influence and has made a great impact since he’s come here. He’s got a few years left in him.”