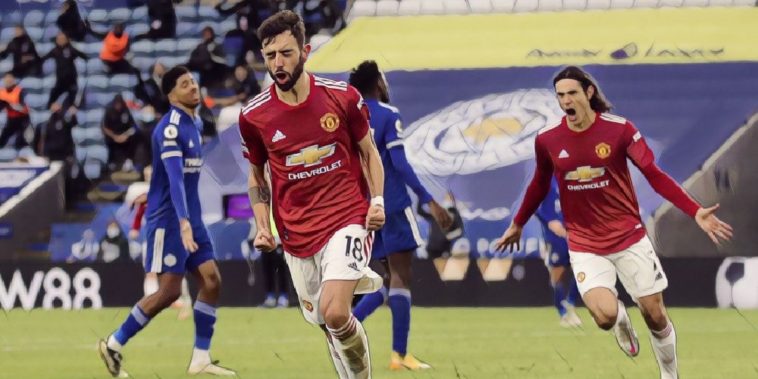 The most competitive Premier League season in recent memory continued over the festive schedule, the traditional Boxing Day round of fixtures providing more intriguing action.

Manchester United‘s perfect away record was ended by an entertaining 2-2 draw at Leicester, whilst Arsenal bounced back from a seven-game winless run to inflict a third defeat in four fixtures on London rivals Chelsea.

Sam Allardyce secured his first point as West Brom manager with a hard-fought draw at champions Liverpool, and there were wins for both Manchester City and Everton who closed the gap on the league leaders.

We’ve picked out some of the Premier League’s better performers from the weekend’s fixtures, here are seven players who shone bright in gameweek 15:

Bruno Fernandes has appeared in this feature on an almost weekly basis given his performances for Manchester United so far this season, the midfielder arguably the most influential player in the Premier League at present.

Fernandes continues to produce at a remarkable rate for Ole Gunnar Solskjaer’s side and was central to his side’s fortunes at Leicester this weekend, providing an assist for Marcus Rashford’s opening goal before scoring the Red Devils’ second with a composed finish.

Fernandes’ goal at the King Power Stadium took him to 10 league goals for the season with only four players having scored more, whilst only Harry Kane can better his 16 goal involvements in the division this season.

The Portugal international is the creative hub of the side and undoubtedly the leader of an emerging team, his willingness to shoulder responsibility and demand better from his teammates paramount to United’s hopes of success.

Paul Scholes stated his belief that Fernandes was a better player than he was following his latest showing, a telling compliment from the former Manchester United midfielder who stands as the most successful English player of all-time.

Paul Scholes says Bruno Fernandes is better than he was 🤩

🗣 "What he’s doing is phenomenal.

Fernandes has now provided a huge 31 goal involvements in just 28 league appearances since moving to the Premier League from Sporting Lisbon, a frightening rate of productivity from a midfielder who must surely now be considered amongst the world’s best.

Andre-Frank Zambo Anguissa’s return to Fulham this season has been like a new signing for the west London side, the midfielder having emerged as a key figure in a team showing significant signs of improvement under Scott Parker.

Anguissa struggled during his debut campaign as the club were relegated in 2018/19, before spending last season on loan at Villarreal and earning plenty of praise – with Real Madrid reported to have been monitoring the Cameroonian.

The 25-year-old returned to Craven Cottage this summer with a point to prove following Fulham’s promotion and has been an excellent addition to the side, ranking second in the Premier League for tackles, interceptions and players dribbled past so far this season.

Anguissa was Fulham’s leading light as the Cottagers held Southampton to a goalless draw this weekend, influencing the play in both boxes and registering more tackles, shots on target and dribbles than any of his teammates.

After early season predictions that Fulham may finish bottom of the pile with a paltry points total, recent performances have raised hopes of survival and the all-action Anguissa has been the force behind their improvement.

Mikel Arteta placed his faith in youth in a bid to end Arsenal’s wretched run of form on Boxing Day, with the Gunners’ youthful side producing an encouraging display to beat Chelsea at the Emirates.

Smith Rowe operated as the central figure behind lone forward Alexandre Lacazette and his energy added a new dimension to the Arsenal attack, the academy graduate working tirelessly and providing poise in possession.

Smith Rowe was at the centre of a positive performance as he drove forward and played incisive passes in attacking areas, his creativity a welcome addition to a Gunners side that has lacked both imagination and invention this season.

After earning his stripes in the Europa League it was a deserved inclusion for the youngster, who showed there is reason to be optimistic about Arsenal’s next generation following the struggles of their senior stars.

The win over Chelsea moved Arsenal six points clear of the relegation places and with fixtures against Brighton, West Brom, Crystal Palace and Newcastle in their next four, Arteta will hope his emerging brigade can provide the spark for an upturn in fortunes.

Manchester City’s season has been a strange one to date with the club’s new-found defensive solidity having come at the cost of their usual attacking threat, the free-scoring side of previous campaigns having been replaced by one now rather more solid than spectacular.

City moved within six points of the leaders with a game in hand after a comfortable 2-0 win over Newcastle on Saturday, the highlight of their performance another positive display from full-back Joao Cancelo.

Cancelo endured a disappointing debut campaign at the Etihad but has looked a different player this time around, providing forward threat from full-back and thriving on either flank.

The Portugal international played in his preferred right-back role in the absence of Kyle Walker against Newcastle and brought dynamism and energy to the side, popping up in dangerous areas throughout and playing his part in both goals.

Man City have relied too heavily on Kevin De Bruyne for creativity this season and Cancelo’s improvement has alleviated some of the pressure on the Belgian’s shoulders, registering the second-highest number of key passes behind his midfield teammate.

De Bruyne and Riyad Mahrez are also the only two players with a higher expected assists figure than the 26-year-old, with Cancelo’s ability to fly forward and make things happen adding a different option to a City side still attempting to find their attacking groove.

It’s not often that a centre-forward features here despite failing to find the net, and whilst Ollie Watkins perhaps should have been on the scoresheet this weekend his performance was no doubt vital to Aston Villa‘s 3-0 win over Crystal Palace.

Watkins led the line superbly for the home side despite their man disadvantage, running the channels tirelessly and winning seven aerial duels as he occupied the Crystal Palace backline in fine fashion.

Watkins was involved in all three goals and whilst his own luck was out – twice hitting the woodwork – the goals will surely soon flow after a six-game barren run for the £28m signing from Brentford.

Dean Smith was full of praise for the ‘outstanding’ contribution of Watkins and said there was no player in the Premier League he would rather have leading the line with 10 men than the 24-year-old, who has quickly become a fans’ favourite for his unrelenting commitment and huge work ethic.

West Brom appeared to be playing with an entire back 11 at times during the first-half of their clash with Liverpool on Sunday, finishing the opening 45 minutes a goal down and with just 18% of the possession in a performance lacking any form of ambition.

Critics were quick to aim shots at new manager Sam Allardyce for his ugly and unimaginative style of play, though the Baggies’ dogged defending ultimately resulted in a point at Anfield after snatching a late set-piece equaliser through Semi Ajayi.

West Brom defended in numbers and amongst their key performers was Darnell Furlong, who battled valiantly against the duel threat of Sadio Mane and Andy Robertson down the left-hand side and visibly irked the former with his competitive defending.

It was as tough a test as there is for a Premier League right-back but the 25-year-old survived the onslaught from the home side, West Brom’s increased risk in the second period paying off as they snatched the unlikeliest of points on Merseyside.

Tom Davies has found himself as somewhat of a forgotten figure at Everton following the club’s revamp of their midfield during the summer, the arrivals of Abdoulaye Doucoure and Allan having pushed the academy graduate down the pecking order.

The hamstring injury to Allan saw the 22-year-old make just his fourth Premier League start of the season at Sheffield United on Saturday, and the youngster produced an impressive performance to state his case for more regular inclusion.

Davies played with a new-found maturity at Bramall Lane this weekend with the over enthusiastic showings of his youth replaced by calm and composure, regularly picking up possession off the Everton centre-backs and attempting to break down the hosts with penetrative passing.

Arguably the best player on the pitch until his substitution with 16 minutes remaining, Davies energy and tidiness in possession has handed Carlo Ancelotti food for thought as he continues to deal with a mounting injury list at Goodison Park.