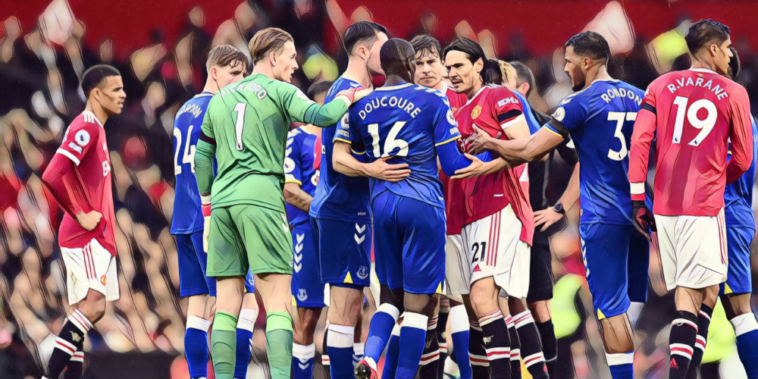 Manchester United dropped points at home for the second week running, as Andros Townsend’s second-half strike earned a 1-1 draw for Everton at Old Trafford on Saturday.

Following on from his last-minute winner against Villarreal in midweek, Cristiano Ronaldo was a surprise omission from the starting XI, with Ole Gunnar Solskjaer opting to shake things up by naming five changes from that dramatic victory.

The Norwegian had likely been influenced by the quick turnaround from Wednesday’s fixture and the shaky first-half showing against Unai Emery’s side, albeit the inclusion of Anthony Martial, in particular, raised a fair few eyebrows due to his recent poor form.

With the game edging towards half-time, the breakthrough eventually came for the hosts courtesy of Martial’s first goal in eight months, the recalled forward latching onto Bruno Fernandes’ perfectly weighted pass and curling in past Pickford.

Everton fought back in the second half and found an equaliser on the counter-attack from Andros Townsend, who cheekily celebrated his fifth goal in all competitions since moving to Merseyside with a Ronaldo-inspired celebration.

Everton had a second goal disallowed for a marginal offside in the closing stages, as Tom Davies’ cross was turned home by Yerry Mina, though the Colombian’s celebrations were premature after VAR disallowed his close-range effort.

United are now without a win in their last two league fixtures and Solskjaer bemoaned both his side’s lack of cutting edge and vulnerability on the counter-attack.

“Well, part of it was really good,” Solskjaer told his pre-match press conference.

“I thought we started well, good energy, created some good openings and scored a fantastic goal. Coming in to half-time 1-0, you’re pleased. Second half we lacked the cutting edge to get the second which is vital in a game like this.

“From a corner, which we have, you concede five seconds later so that was a disappointment”.

Despite that disappointment, Solskjaer insisted that his side had not played with too much risk in the build-up to the equalising goal and simply didn’t deal with the counter-attack well enough.

“No, we weren’t too open, we had enough players behind the ball. But we didn’t deal with the tackles when we should have.

Solskjaer discussed Bruno Fernandes’ post-match comments, with the midfielder admitting United’s slower tempo in the second half had allowed Everton to gain a foothold in the contest.

“We gave them a few counter-attacks. I don’t know the stats, but I know we had the ball most of the time. They didn’t play through us at all really, they counter-attacked.

“That was the same as Wednesday night, we need to be better. When to risk it, how not to be counter-attacked. That’s the key lesson today.”

With the international break to come next week, Manchester United aren’t in action against until the 16 October, when they face Leicester City.