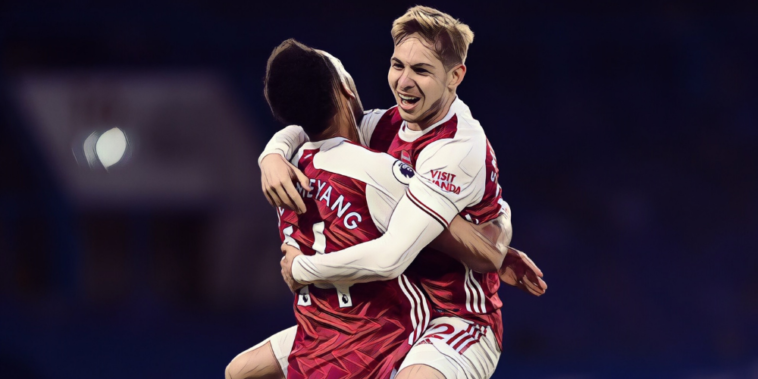 Emile Smith Rowe says Arsenal worked on the ‘high press’ that led to the club’s winner in the 1-0 win against Chelsea on Wednesday.

Arsenal kept alive their faint hopes of securing European football with a hard-fought win over the Champions League finalists at Stamford Bridge, Smith Rowe scoring the game’s only goal after a mistake from Chelsea midfielder Jorginho.

The Italy international misjudged his back-pass under pressure from Smith Rowe, with the scrambling Kepa Arrizabalaga only palming the ball into the path of Pierre-Emerick Aubameyang, the Gabon international teeing up his young teammate the open the scoring.

Smith Rowe was pleased with his side’s resilience as Arsenal withstood some late pressure to hold on for all three points, revealing the press that led to Jorginho’s mistake came as a result of work on the training ground.

“Important result, we had to dig deep, it was a tough test but important for our season,” he told Sky Sports.

“We worked on the pressing in training, high press and we did well to make them make the mistake and Auba [Pierre-Emerick Aubameyang] set me up which was good.”

Smith Rowe was fortunate to see his effort find the far corner after mishitting his finish, the 20-year-old scoring for the second successive game after scoring his first Premier League goal last weekend.

Arsenal lead after a calamity mistake from Jorginho!

The midfielder admitted his winning goal was a ‘slightly lucky finish’, but says he is hopeful both he and his teammates can now ‘keep pushing forward’ as they bid to improve following a testing campaign.

“That happens sometimes, I’m happy it went in but it was a slightly lucky finish. It means so much to score for this fantastic club, I just want to keep pushing on.

“I’m so tired but I feel like we played well, we looked tired at times but we got the three points and showed our character, we defended really well in patches and after this tough season it was a good performance from us today.

“We’re working really hard in training and showed this season how good we can be, but we need to keep pushing forward.”