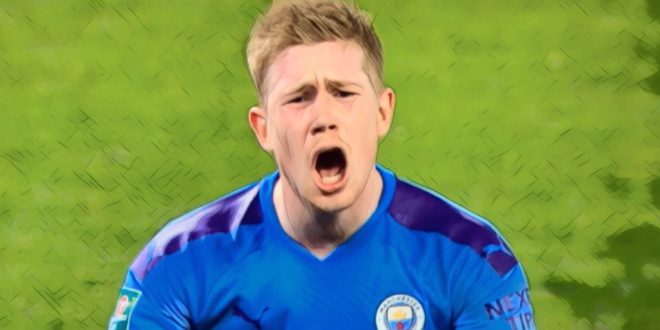 Manchester City booked their place in a third successive EFL Cup final with a 3-2 win over Manchester United, though it certainly wasn’t plain sailing for Pep Guardiola’s side.

Man City came into the game with a comfortable 3-1 lead over their Manchester rivals following their dominant display at Old Trafford three weeks ago.

It was an electric start at the Etihad for the hosts who carved Manchester United open at will in an impressive opening first 15 minutes, though Ole Gunnar Solskjaer’s side finally started to stem the flow of attacks, and after 35 minutes, managed to take the lead on the night and cut the aggregate deficit in half thanks to a fine Nemanja Matic strike.

The goal created an air of tension around the East of Manchester, City missing a number of gilt-edged chances which left the feeling that they would be dealt a late sucker punch.

United’s hopes of producing of a turnaround would be virtually killed off, however, when goalscorer Matic was shown a red card for a second bookable offence, with their only real chance coming from an edge-of-the box free-kick that Fred blasted into the wall.

Despite their progress to the final, City playmaker Kevin de Bruyne cut a frustrated figured after seeing his side waste a whole host of chances throughout the game.

“I can’t really comprehend how we lost this game,” De Bruyne told Sky Sports. “For me Manchester United didn’t have one chance today. In the end, good we go through.

“I think we got sloppy. The goal we did not clear the lines well and out of nothing they scored. You can tell me if they had a chance again. We fought when we had to and will learn from the mistakes.

“If we win the final no-one will talk about this game. The final is a nice day and we will fight to win the cup. If we do it will be nice.”

City’s aggregate win means they will face Aston Villa in the Wembley finale on March 1st, their fourth League Cup final in the last five years.