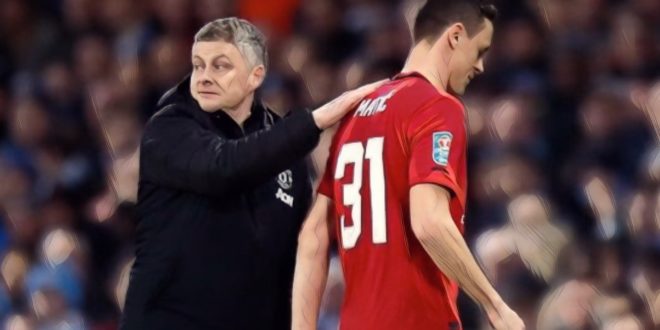 Manchester United won at the Etihad for the second time this season, though their 1-0 victory wasn’t enough to send them to the Carabao Cup final, losing 3-2 on aggregate.

Manchester United came into the game knowing that they had it all to do, Man City opening up a 3-1 aggregate lead in the first-leg at Old Trafford as Pep Guardiola’s side produced a footballing masterclass at the home of their rivals three weeks ago.

The current Carabao Cup holders got off to another electric start at the Etihad, peppering the United goal at will, with Ole Gunnar Solskjaer having David de Gea to thank for a number of fine saves.

However, United managed to weather the early Man City storm, and after 35 minutes, managed to take the lead with their first shot of the game, Nemanja Matic netting a sweetly struck half-volley to cut the aggregate deficit in half.

United’s gameplan of keeping in it until the death was clear, but their task was made all the harder when goalscorer Matic was sent off for two bookable offences in the 76th minute, and the all-important second goal never really looked like coming.

Speaking after the game, Ole Gunnar Solskjaer was furious at Kevin Friend’s decision to send off the Serbian midfielder, but also spoke of his pride in his team.

“We have come a long way. Even though we did not create too many clear cut chances we pressed them back. It pleased me.

“Of course it is hard to come here and score a goal with 11 never mind 10. It was never a sending off. Absolutely for me a joke. How many times did they foul us?”

Next up for United is a home game with Wolves, where they could hand a debut to Bruno Fernandes, the club announcing that they have struck a deal to sign the Portuguese midfielder believed to be worth an initial €55 million.