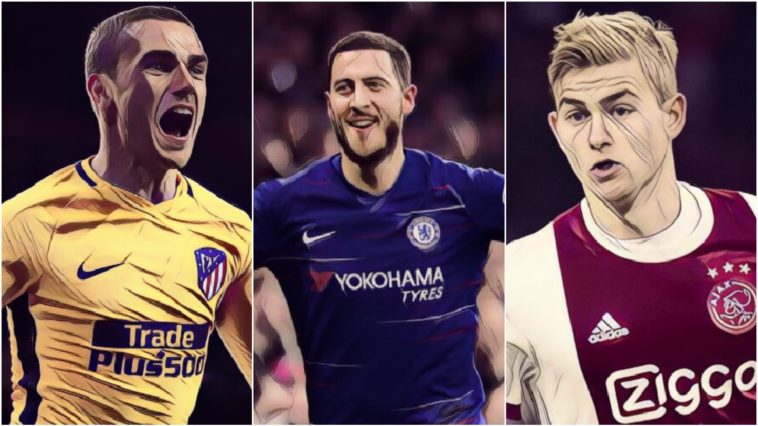 The football season is not quite over just yet, with the Champions League and Europa League finals to come, but some of the biggest clubs in the world have already sorted out their transfer business.

The likes of Bayern Munich, Barcelona and Juventus have already made some massive signings before the 2018/19 season concluded, while there are a bunch of deals yet to be made official. Who will Real Madrid and Manchester United sign? What are Chelsea and Manchester City up to? Is Jurgen Klopp going to splash any cash at Liverpool?

Whatever happens, these are the players we know are definitely on the move this summer no matter what. Some have already signed the contract, others are just a matter of time.

The transfers we already know are going to happen in 2019/20:

It would be far more surprising if the Belgian stayed at Stamford Bridge beyond this summer than if he stayed, with Real Madrid being long-time pursuers of the wide forward. Despite the impending transfer ban that would stop them from replacing Hazard, Chelsea appear consigned to losing him after the Europa League final.

We know his intentions, we just don’t know the destination yet. Despite releasing a documentary last season in which he announced he would not be leaving Atleti, the French forward has come out and said he will be leaving the Spanish capital this summer.

Griezmann wanted to make yet another documentary stating his intention to leave, but the club unsurprisingly told him to stop taking the piss. The likeliest destination would be Barcelona or Manchester United.

The 19-year-old centre-back admitted in April that he didn’t expect to be sold for a bigger fee than his departing teammate Frenkie de Jong because “normally teams spend more money on midfield players”, but given how much Liverpool were willing to spend on a certain Dutch defender it might not be so outlandish to think he might. De Ligt appears destined to reunite with de Jong in Barcelona, but he will be leaving Ajax one way or another in the coming weeks.

The Welsh midfielder revealed in January that he would be joining Juventus when his current contract expires on 1 July. Ramsey has signed a four-year deal with the Serie A champions that will see him earn £325,000 per week. The Arsenal man will have earned £67.6m (€77.2)m by the end of his stay in Italy. Not bad if you can get it.

The French defender will be a massive loss to Atleti, who are also letting Diego Godin leave this summer. But he will join Bayern Munich as the most expensive Bundesliga player of all time, with the German club paying €80m (£68m) for his services.

Spare a thought for Thomas Lemar, who joined the Spanish club last year to specifically play alongside Griezmann and Hernandez, but will now be left without either in the squad next season.

The link between Ajax and Barcelona goes back over 40 years to the days of Rinus Michels and Johan Cruyff, and it continues to this day with the signing of Frenkie de Jong.

The 21-year-old, who signed a five-year contract in January in a transfer worth €75m (£65.3m), was a no-brainer of a signing for La Blaugrana considering his ability on the ball and range of passing.

Bayern are not messing around this year, as they have gone into overdrive to strengthen an aging squad, targeting their backline specifically. Pavard will join the German giants after Stuttgart agreed a deal worth €35m (£30m) in April. A World Cup winner with France last summer, we’ll use any excuse to watch this golazo again.