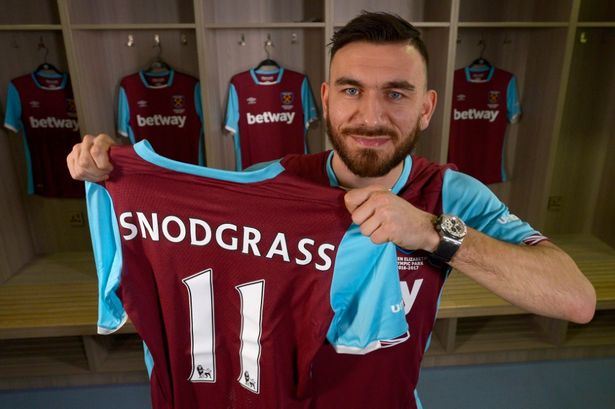 With only a few days left until the end of this January’s transfer window, West Ham seem to have woken up and finally made a couple of decent signings, with the likelihood of more business taking place over the coming days.

The arrival of Jose Fonte from Southampton and Robert Snodgrass from Hull City, seem on paper at least, to be good signings. Both players have experience of playing in the Premier League and should be well aware of the expectations the Hammers have for the rest of the season.

All of this of course is in stark contrast to the numerous signings West Ham made during the summer. Most supporters will agree that none of those players, with the possible exception of Edimilson Fernandes, has done anything to justify their arrival.

Both Fonte and Snodgrass should be in the squad for the Hammers next match against Manchester City at the London Stadium on Wednesday.

Fonte will most likely partner Winston Reid in central defence, while Snodgrass will be vying with Sofiane Feghouli for a wide midfield role.

This does depend on whether Feghouli stays of course, as several clubs have reportedly shown an interest in buying the Algerian this month.

Having arrived in the summer, Feghouli is one of the players that has so far failed to impress, although recently a run in the team has seen him put in a couple of improved performances. Now that he seems to have turned a corner it would be a shame if he was to be sold.

Feghouli’s first team chance has come about primarily because of the absence of one player, Dimitri Payet, who previously occupied the attacking midfield role.

On the subject of Payet, the saga seems to rumble on with Marseille unwilling, at present, to meet West Ham’s £30 million valuation. Rumours suggest a deal will be done before the deadline, with the Hammers likely to accept a compromise of between £25 million and £26 million.

Most supporters would like the club to hurry up and get rid of the player, as he does not want to be at West Ham anymore and has let everyone down with his bad attitude.

Bearing in mind, West Ham only paid £10.7 million for Payet in 2015; whatever they get for him will amount to a healthy profit.

The money will come in handy for the signing of Scott Hogan, who’s arrival is reportedly dependent on Payet leaving.

The Brentford striker would be another good signing, as he has a good goal scoring record, experience of playing in this country – albeit outside of the Premier League, and importantly he wants to come to West Ham.

The Hammers have had a fair amount of success with purchasing players from the Championship over the last few seasons. Aaron Cresswell from Ipswich Town and Michail Antonio from Nottingham Forest both adapted to life with West Ham instantly and have recently been called into England squads.

Purchasing players from the Championship, such as Hogan, would seem to be less fraught with danger than buying foreign stars with little or no experience of playing in this country.

Whether Payet leaves and Hogan arrives before the transfer deadline remains to be seen, but by the time West Ham take on Manchester City next week all of the January comings and goings will be over and hopefully the Hammers’ new arrivals will have made a good start.

It is not unusual for a January arrival to make an instant impact, as many fans will remember Trevor Sinclair’s debut on 31 January 1998. He scored twice in a 2-2 home draw with Everton.

Any bets on Snodgrass striking for the Hammers next Wednesday?