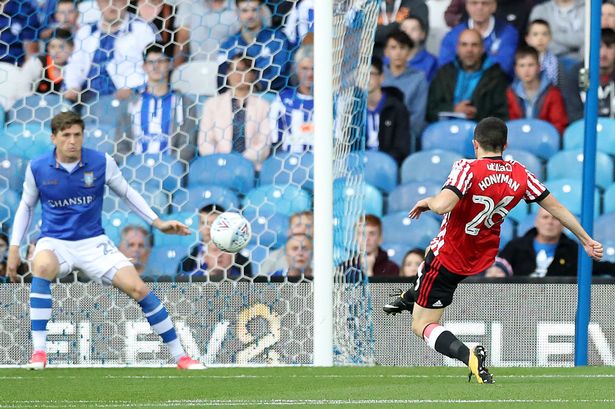 Sunderland maintained their unbeaten start to life in the Championship with a 1-1 draw against last season’s playoff contenders Sheffield Wednesday.

Simon Grayson would go unchanged to the side that defeated Norwich 3-1 on Sunday. Sunderland would face former Black Cats Keiren Westwood and fans favourite Ross Wallace as well as Steven Fletcher who started on the bench.

The visitors started well and looked the most likely to score, and found the back of the net after just four minutes through George Honeyman. Some good interchange play down the left between Galloway, McGeady and Vaughan allowed the Irishman to drive into the area and square it past Westwood to Honeyman, who controlled it before blasting it past the three defenders on the line, to make it two goals in three games for the Sunderland academy product.

The closest Wednesday got was through striker Sam Winnall who forced Steele into a reasonably easy save low down.

Aiden McGeady delivered in a superb free kick only for Grabban to put thr free header wide when he should’ve at least hit the target.

Just before half time full back Brendan Galloway stole in and got a shot away only for it to be a comfortable save for the goalie. Sunderland were getting troubled down the right wing but fans favourite Billy Jones coped brilliantly.

The first chance of the second half fell to James Vaughan after McGeady’s hit was blocked it fell for the ex Bury hitman who vollied high and wide of the Wednesday net.

However the Owls pushed forward and were eventually rewarded through a David Jones screamer from 30 yards after nobody closed him down. Sunderland from then on looked like they were holding on especially when Steele came to collect the corner but failed causing a goalmouth scramble which Gary Hooper should’ve made the most of but left back Galloway was on the line to twice deny him. Hooper would’ve annoyed that he didn’t finish one of his chances especially after rattling the bar from the edge of the area when no Sunderland came to close him down.

Overall a draw was probably the fair result. Sunderland dominated the first 45 and Wednesday dominated the second, in the end Sunderland looked like they were playing for a draw. A decent away day and a good point on the road for Simon Grayson and the 2700 travelling supporters.