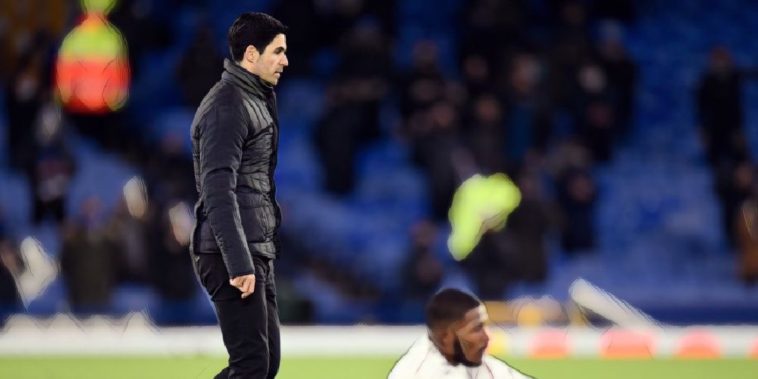 Newcastle United legend Alan Shearer has admitted he’s not totally convinced that Arsenal will be able to avoid relegation, after the Gunners suffered another defeat away to Everton on Saturday evening.

Mikel Arteta was already under intense scrutiny going into the match at Goodison Park after guiding the Gunners to their worst ever start to a Premier League season, yet any prospect of a potential revival went out the window as they were once again on the wrong end of the scoreline.

The hosts had taken the lead through a Rob Holding own goal, before a Nicolas Pepe penalty drew the visitors level midway through the first half. Such is their miserable run of current form, however, the North London club couldn’t keep the game level for long, with Toffees defender Yerry Mina powering home a header from a corner on the stroke of half-time.

Carlo Ancelotti’s would go on to see out the game despite a late spell of Arsenal pressure, with the result condemning Arteta’s men to an astonishing eighth defeat in the Premier League this season and leaving them just four points above the drop zone.

Roy Keane recently made a tongue in cheek remark about the Gunners being in a relegation scrap, saying that Arteta’s side would ‘have enough to stay up’, however speaking after their recent defeat, former England international Shearer suggested he wasn’t as convinced.

Arsenal have now lost eight Premier League games this season, only Sheffield United – who have one point – have lost more (12).

Time is running out for Mikel Arteta. ⏳ pic.twitter.com/en9Scie6u0

“I wouldn’t be so sure,” the Premier League record goalscorer said on Match of the Day. “Not with that starting team and the attitude of some of those players

Such dreadful form has inevitably led to calls for the Spaniard’s head from the frustrated fanbase and Shearer believes that the Gunners boss is being let down by a group of players who aren’t up to scratch.

“Mikel Arteta should be a worried man relying on that group of players trying to save his job,” he continued. “Twelve goals all season, they have no options.

“Against Everton, Pepe was not prepared to get into the box, he was jogging, sometimes walking. He has got to do more.

“There are a few players in that team who are not giving everything for the manager. Arsenal are never going to score goals playing like that.”