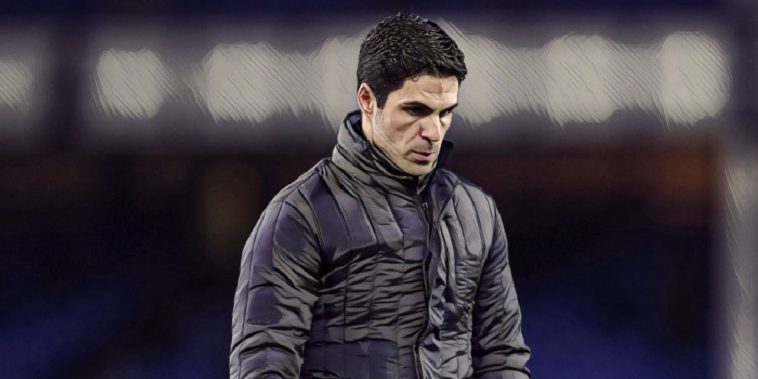 Arsenal’s winless run in the Premier League extended to seven games after Mikel Arteta’s latest return to Goodison Park ended in a 2-1 defeat.

Much has been written about Arsenal’s ongoing struggles in recent weeks, the club having woefully struggled in front of goal this season, with their last league win coming back in early November.

It was Everton who got themselves in front after 22 minutes, former Arsenal player Alex Iwobi receiving the ball on the right before putting a cross in towards the dangerous Dominic Calvert-Lewin, and as the England international attacked the ball, his effort was deflected past his own goalkeeper by stand-in captain, Rob Holding.

The Gunners would be handed an opportunity to level the scores after Tom Davies’ attempted clearance saw him bring down Eddie Nketiah in the box, Nicolas Pepe stepping up and sending Jordan Pickford the wrong way from the resulting spot-kick.

However, the hosts would retake the lead on the stroke of half, Yerry Mina once again utilising his aerial presence to power home a header from a Gylfi Sigurdsson corner.

Arsenal improved after the break, but in all honesty, rarely looked like threatening Pickford’s goal, the north London side failing to get a shot on target after the break, with Everton happy to sit back and surrender possession.

14 – Arsenal’s points return from 14 games this season is their worst record at this stage since the 1974-75 campaign (12 points, converted to 3/win). Desperate. pic.twitter.com/wowPbSkoXe

The result leaves Arsenal five points above the relegation zone having played a game more than all the teams below, and speaking afterwards, Mikel Arteta admitted his side make it difficult for themselves but insisted his side are ‘fighting’ despite their recent run.

“Without conceding much we lost the game on two key moments,” he told Sky Sports.

“We reacted really well. We dominated the game. We created enough chances at least to not lose. We hit the bar. We don’t have the luck.

“We are in a big fight. We lost against Burnley without them having a shot on target, and now we lose because of a couple of chances.

“It’s really difficult when you play a team who are defending low and wasting time. We make it difficult for ourselves conceding the first goal.

“I think we had 15 shots but only two on target. We need to improve our rate, that’s the reality.

No team have scored fewer goals than Arsenal (3) across their last 6 Premier League games.

3 goals and 2 points in their last 6. 🤯 pic.twitter.com/eXZaRSfAAL

“We need to generate more to win football matches. When it comes to small details, the other team wants it more.

Things don’t get much easier for Arsenal, Arteta taking his side face Manchester City in midweek in the Carabao Cup quarter-finals before hosting Chelsea in the Premier League on Boxing Day.