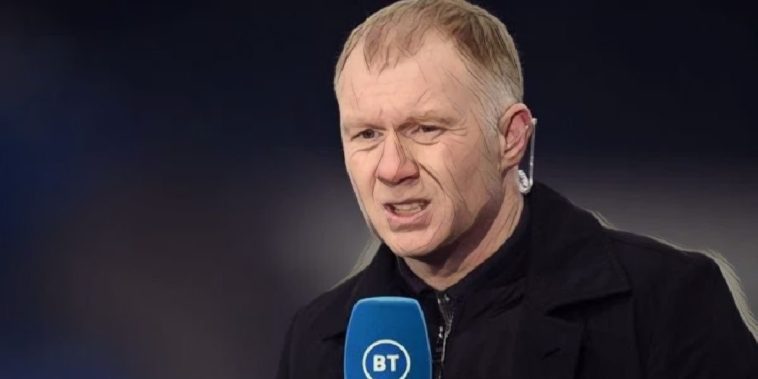 Manchester United legend Paul Scholes has opened up on why Ole Gunnar Solskjaer’s defence is preventing his former club from challenging for honours.

The Red Devils were at one point top of the league back in January, yet they currently find themselves ten points behind leaders Manchester City after an inconsistent period in recent weeks.

The last month has seen Manchester United suffer a shock defeat to bottom side Sheffield United at home, as well as a disappointing 1-1 draw with West Brom, with their often shaky backline once again coming under fire.

While they did run out 3-1 winners over Newcastle United at the weekend, it was far from comfortable, the goalkeeper and the defence looking vulnerable, particularly in the first half.

In truth, that’s been the story of their entire season, with magic moments from the likes of Bruno Fernandes and Marcus Rashford often bailing out a defensive unit that has now conceded 17 more goals than leaders City.

As has been the case in recent years, Solskjaer’s side have struggled for a consistent centre-back pairing, both Eric Bailly and Victor Lindelof failing to nail down a spot beside Harry Maguire, while the England international hasn’t exactly been at his best.

According to former United midfielder Paul Scholes – who played in front of some of the Premier League‘s greatest ever defenders as he won 11 league titles at Old Trafford – their current woes at the back are what’s holding them back from really challenging for silverware, picking out Lindelof for particular criticism.

“Everywhere else, I think their midfield and forward players are really exciting, he’s built a really exciting team that are capable of scoring goals. I think in the middle of defence, Lindelof especially, they lack authority.

“He can be bullied, sometimes he’s not strong enough. I think both can be very timid, they don’t really command or bully centre-forwards, they don’t really demand from the rest of the team. I think these two positions in particular are massive for teams that are going to win the league.

“You look right through the history of teams that have won the league, they are dominant and authoritative centre-halves. You think of Vincent Kompany at City, Van Dijk at Liverpool – who couldn’t win the league until they brought someone with authority at centre-back in.

“Can these two learn that? I’m not sure they can. I think Maguire will be okay, Lindelof is the one that worries me – he’s the one that seems to get bullied more often than not.

“They’ve got Eric Bailly on the bench, a lot of people have called for him to have a chance, but the trouble with him, he comes in and plays a game, then you don’t see him again. He just cannot stay fit, he’s one of those players that just cannot get a run of games.

“You look at the defensive side, the two centre-halves, their argument will be: we’ve played Liverpool, we’ve played Manchester City and kept a clean sheet, yeah, okay, they did, but when you look at the other side of it – the attacking side of the game, the attacking players completely went, they had to play two holding midfielders because they were worried about the centre-halves and possibly the goalkeeper.”

United have been linked with a number of centre-back’s ahead of the summer transfer window, including Sevilla’s Jules Kounde, RB Leipzig’s Ibrahima Konate and Real Madrid pair Raphael Varane and Sergio Ramos.