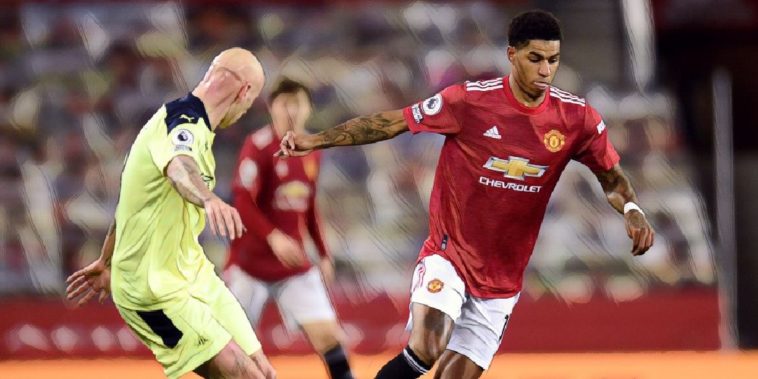 Manchester United moved back up to second as they laboured to a 3-1 over a struggling Newcastle side at Old Trafford.

After their midweek exertions in Europe, Manchester United looked slow to settle into the game, with the Magpies the brighter side from the off.

Man United would take the lead on the half-hour mark though through Marcus Rashford, the England international attacking the Newcastle defence from the left flank, shifting onto his favoured right foot inside the box before firing past Karl Darlow into the bottom left corner.

Newcastle would however earn themselves an equaliser just six minutes later, the visitors playing a short corner before Joe Willock played the ball in towards the back post. United skipper Harry Maguire failed to deal with the cross effectively, his tame header landing at the feet of Allan Saint-Maximin who lashed his half volley high past David de Gea.

Steve Bruce’s side once again started brightly after the break, Saint-Maximin forcing a save out of De Gea with a strike from the edge of the box.

However it was the home side that regained their lead in the 57th minute, a loose pass from Nemanja Matic to Bruno Fernandes evading the Portuguese, but somewhat fortuitously finding its way to the unmarked Dan James at the back post, the Welshman following up his strike against Real Sociedad with a well-hit effort beyond Darlow.

Marcus Rashford was Manchester United’s most dangerous outlet, and in the 75th minute, the forward won his side a penalty, his quick feet drawing a foul from Joe Willock inside the box, with Bruno Fernandes doing what he has done so often since his arrival at Old Trafford and dispatching the resulting penalty.

The result moved the Red Devils back up to second after Leicester City had overtaken them earlier in the day, and speaking afterwards, Ole Gunnar Solskjaer was pleased with his side’s improved performance in the second half

No player has won more fouls (4) in a single Premier League game this season for Man Utd than Dan James.

And he got on the scoresheet today. pic.twitter.com/LRDlTAXpXb

“We had to up the tempo a little bit, especially in the last third and I felt we managed to do that,” he told BT Sport. “It is always difficult to get going after an away game in Europe. Even though we dominated possession and had a lot of the ball we couldn’t create many opportunities. I felt in the second half we found our positions better.”

Aksed about Dan James’ recent re-introduction to the side, the Norwegian said: “He never disappeared. He has been working hard behind the scenes and always been available. He is always a player you can use in different areas with his energy and pace.

“We work with him, we try to help everyone but of course Dan came from the Championship, he hit a few goals in the first games and it is bound to take some energy from you. He has knuckled down and really worked to get back to full fitness but maybe more so confidence, to believe in himself.”

United are now six points clear of fifth-placed Chelsea and nine clear of Liverpool in their pursuit of another top-four finish, with a number of sides in the race for Champions League football dropping points in recent weeks.

“We can’t control any other team, we just have to focus on ourselves and be the best possible Manchester United every game. Things happen and there are many surprises in football.”

Next up for Solskjaer’s side is the return leg against Sociedad, before they take on Chelsea at Stamford Bridge next weekend.