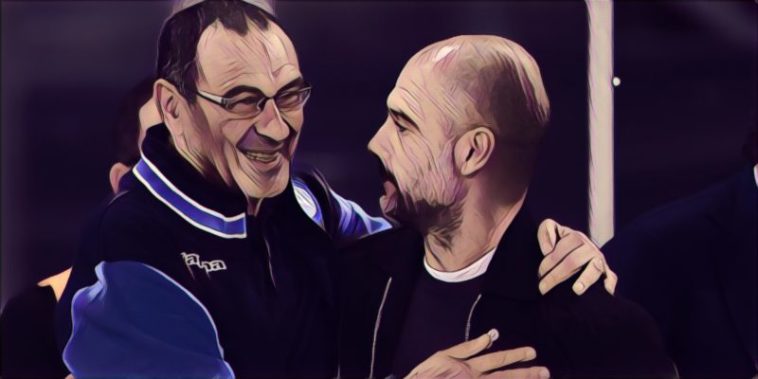 Maurizio Sarri has joked that he has no idea on how to beat Manchester City on Saturday night, highlighting his record against Pep Guardiola.

It is without a doubt the game of the weekend as Chelsea host Man City at Stamford Bridge on Saturday evening, with the visitors still having their unbeaten record intact after 15 league games.

Chelsea meanwhile have slipped to fourth after losing two of their last three, and now have Arsenal breathing down their necks in the race to qualify for the Champions League.

When asked at his pre-match press conference how he plans to beat Guardiola’s City side, Sarri replied: “I don’t know!

“Against Guardiola I have lost every match, so I don’t know. You’ll have to ask someone else!”

Sarri has faced Guardiola three times in his career, and has yet to get the better of the Catalan boss.

However, while he may not have any experience in beating the City boss, he certainly has his respect, with Guardiola being full of praise of Sarri’s Napoli side last year when they came head to head in their Champions League group.

“They are perhaps the best side I’ve faced in my career.

“I am so proud because I know the side we beat. I am in love with Napoli, with the way they make short passes and they didn’t give us time to think in the opening 20 minutes. We didn’t have the courage to play.”

The other meeting between Sarri and Guardiola was in the Community Shield back in August, when City ran out 2-0 winners at Wembley.