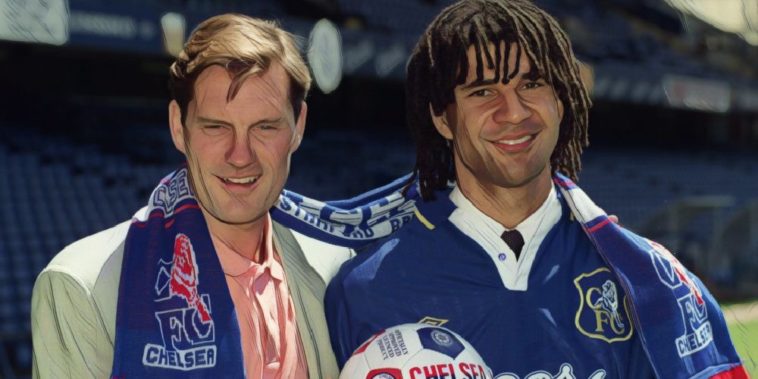 Ruud Gullit has revealed how Glenn Hoddle was key to his Premier League ‘adventure’ as he reflects on his time at Chelsea 25 years on.

The former Ballon d’Or winner arrived in west London during the mid-nineties as one of the first star foreign names to head to the rebranded Premier League, enjoying a fine debut season with the Blues to finish as the runner-up for the FWA Footballer of the Year award.

Gullit has now looked back on his time in the capital and reflected on the way English football has changed since his initial arrival, admitting the Premier League ‘seemed the right place’ for an ‘adventure’ when deciding to leave Serie A.

“When I joined Chelsea, in June 1995, the Premier League was very different to the way it is now,” Gullit told the BBC.

“I wasn’t the first overseas player to come here, but I was one of the first to arrive with a big name, from a bigger league, such as Serie A.

“Looking back, that summer was probably the time the Premier League really began to change into the competition it is now, and it had to. Italy was the king then – all the best players were there. English football was very basic in comparison, and the English wanted to have people from outside so they could try to get their game back again to the highest European level.

“Dennis Bergkamp, David Ginola, Juninho. They all came at the same time as me. The way I saw it, it was an adventure. Personally and professionally, I needed to leave Italy after eight years with AC Milan and Sampdoria and, with the Premier League taking off, England just seemed the right place for a fresh start, at the right time for me to do something new.”

Gullit also discussed the influence Glenn Hoddle had on his decision to sign for Chelsea, admitting Hoddle’s reputation as a player in the Netherlands played an important part in convincing him to head to Stamford Bridge.

“Glenn had to sell Chelsea and their ambition to me – he said they were at the start of a journey too – but what was most important was that it was Glenn,” he added. “In the eyes of the Dutch, he was the best English footballer ever but in England he was not appreciated. In the Netherlands, we said ‘oh my god, he was a player meant for us, not for you’.

“He had first phoned me up a few months previously to say he wanted to sign me and because I saw him as a player who played skilful football, I knew for sure he would not be a manager who would want to play the long ball and that was a very important factor in my decision.”