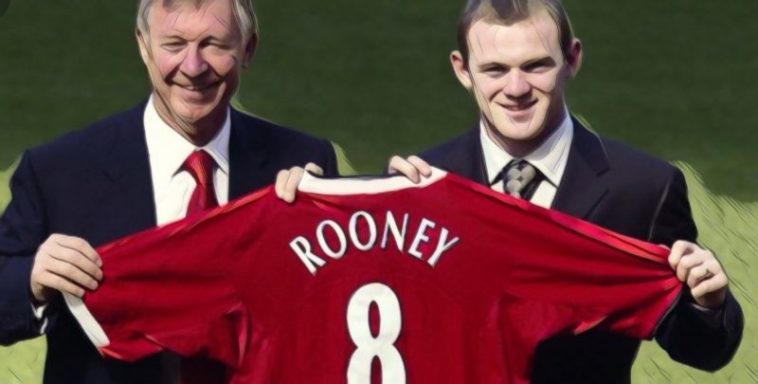 Wayne Rooney has revealed how he handed in a transfer request on the back of a napkin in order to force a move to Manchester United after being pushed to join Chelsea.

Back in 2004, Wayne Rooney was already one of the hottest properties in English football having burst onto the scene as a precociously talented 16-year-old two years previous with boyhood club, Everton.

Still just 18, Rooney would go on to be one of the stars of Euro 2004, scoring four times on the road to the quarter-finals, only for his tournament – and England’s hopes of glory – to be ended as he suffered a broken metatarsal against Portugal.

The move down the East Lancashire road provoked a passionate response from Everton fans who felt betrayed by a boy who had infamously declared ‘Once a Blue, Always a Blue’, though speaking to former boxer and fellow Evertonian, Tony Bellew, Rooney revealed he was ‘heartbroken’ after finding out he was being ‘touted’ to other clubs.

Chelsea –  backed by the billions of Roman Abramovich – were strongly interested in his services and were willing to pay more than United, while Newcastle also submitted a bid, but Rooney said he was determined to be the master of his own destiny and handed in a transfer request to force a move to Manchester.

“I knew before Euro 2004 that I was getting touted around to other teams because Everton needed the money,” he said during a podcast with the former heavyweight champion.

“Certain people, other individuals, were going into clubs saying ‘would you take Wayne Rooney for £30m?’. I was heartbroken, I wanted to play for Everton. But once I found out I was just devastated. I would’ve left at some point to better myself and win trophies but I was devastated. So I thought you know what, okay.

“I was getting pushed to go to Chelsea because Chelsea were offering the most money. But I said you’re not dictating where I go. I want to go to Manchester United. So it was less money for Everton but that’s where I wanted to play. I didn’t want to go to London, to Chelsea, so I took some control back.

“I got told the only way you’re going to Manchester United is if you hand in a transfer request. So I went into the canteen and I wrote ‘I, Wayne Rooney, request a transfer from Everton Football Club’ on a napkin or something. I went back into [David] Moyes’ office and said there you go.

“I felt I got backed into a corner to a certain extent, but that’s football.”

Following his broken foot at the Euro’s, Rooney spent time on holiday in Barbados before returning to Everton to step up his rehab, only to be told that the club couldn’t risk his foot – and subsequently the transfer – breaking down.

“I went to Barbados and when I came back to Bellefield at the time I was ready to go out and start running after my broken foot,” he said. “I got told ‘No you can’t do that,’ and when I asked why they said, ‘because if your foot breaks down again we won’t be able to sell you’. They wouldn’t let me do my rehab in case my foot broke down again and they couldn’t get the money for me.

“There’s loads of stuff like that but it worked out well in the end.”

Rooney would of course go on to rejoin Everton in 2017, spending a year back at Goodison Park before winding down his career with spells in the MLS and English Championship.