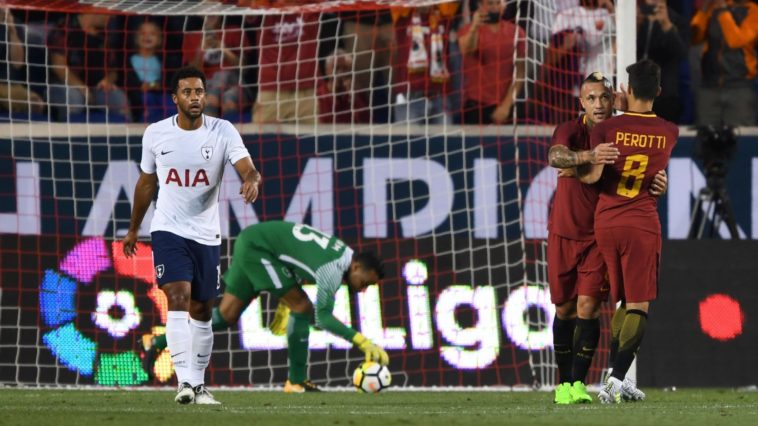 Tottenham lost 3-2 to Italian giants Roma on Tuesday night. It was a game which had positives and negatives for the London side, but after seeing the game I’ve established a few main points that I picked up on.

This probably goes without saying, but Mauricio Pochettino can’t think that his side doesn’t need improvement after last season. A poor European performance last term, and there’s still room to improve on their league position of second if they wish to become genuine title challengers.

None of Tottenham’s stars turned up against Roma, especially Dele Alli and Harry Kane as notable examples of players who had no impact on the game at all. It’s admirable that Pochettino may prefer to give academy players a chance, but sometimes you need an established player to bring on and make a difference.

The departure of Kyle Walker has raised some funds, so Spurs need to get active in the transfer window. A winger, a right-back, and another supporting striker and centre-back would boost their ranks significantly. Also, fans are crying out for a big-name, marquee signing to match their title rivals in the Premier League.

2) Tottenham have some very promising youngsters

From players who have already graced the first team a number of times, such as Joshua Onomah and Harry Winks, to lesser-known youngsters Kyle Walker-Peters, Cameron Carter-Vickers, Anthony Georgiou and Tashan Oakley-Booth, Tottenham have an array of talent that has come up through their academy and played well on Tuesday night.

Even players like Vincent Janssen and Georges-Kevin Nkoudou, who didn’t set the world alight last season, are both still young and looked good against Roma. Walker-Peters and Georgiou were particularly exciting for fans, the former an attack-minded full-back who can play on either side, and the latter a fast, skillful winger, and they gave fans plenty to be excited about in the seasons to come with very solid performances.

3) They need to improve defensively

The Spurs defence were given a large helping hand against PSG when they went down to 10-men, as it took a lot of the pressure off them. However, they were not at all good enough on Tuesday night. Kevin Wimmer was a particular weak link, his mis-placed clearance leading to the second Roma goal and generally not having a great performance over the course of the game.

Their poor defending culminated in the 93rd minute when Roma struck the winner moments after Tottenham equalised – luckily this was just a friendly, but there will be no room for mistakes like that in the Premier League.

4) Questionable refereeing in the MLS

A number of blunders from the referee on the night didn’t shed a good light on the officials. Firstly, he gave a conspicuous penalty which gave Roma the lead, after initially letting play go on. Later, a stonewall penalty for Harry Kane wasn’t awarded, which caused some upset from the Spurs bench.

The referee then somewhat gestured for a couple of the Spurs staff to leave, only for him to decide moments later to let him come back. All in all, not the best officiating you are likely to see.

A lesson that fans and players alike refuse to learn even after time and again, drama unfolding in the dying moments of the match. Roma cruising for a 2-0 victory, heading into the final minutes of the game. A Janssen shot hit the post and was bundled in my Winks in the 87th minute. 2-1. Janssen turned into goalscorer just a couple of minutes later, finishing off a great run and cross from Nkoudou in the 91st minute. 2-2. Game over, right? A great late comeback for Spurs. Alas, not to be – Roma have scored again before they’ve finished showing the highlights of Janssens goal. 3 goals in the last 7 minutes… anything can happen in football.

Tottenham’s next game in against Manchester City on Friday, their first test against Premier League opposition before the season kicks off next week. They’ll be hoping for a better result than the one they experienced against the Italians on Tuesday night.