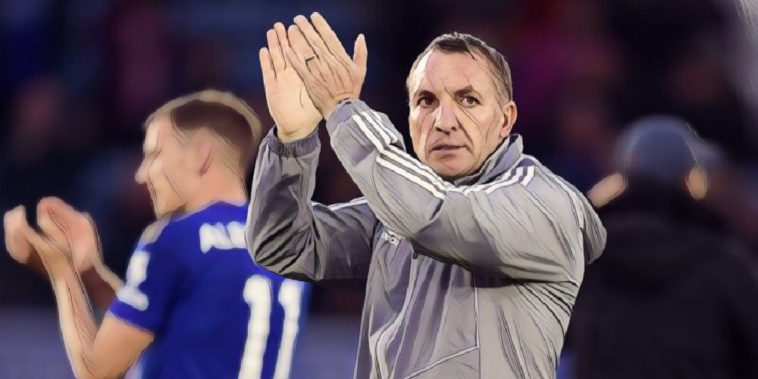 Brendan Rodgers insists Leicester have ‘most certainly’ improved this season, even if the club miss out on securing qualification to the Champions League again.

Leicester spent the majority of last season in the top four before agonisingly falling out of contention on the final day of the 2019/20 campaign, and head into this season’s final fixture in need of favours from elsewhere to secure a Champions League place.

The Foxes have been in the top four since the opening weekend of the campaign, but Tuesday’s defeat to Chelsea allowed Liverpool to capitalise and leapfrog Rodgers’ side with a win at Burnley.

Missing out on Europe’s elite for a second successive season will be a major disappointment given the club’s progress this season, though Rodgers admits it is important to maintain ‘perspective’ with Leicester having secured major silverware with FA Cup success last weekend.

“This week has been really about perspective,” Rodgers said at his pre-match press conference ahead of the club’s final day showdown with Tottenham.

“I look back at everything we’ve had to deal with; a European campaign, the injury list we’ve had… they were injuries to key, important players for us, but we’ve been able to adapt and change the team around to be competitive at the very top.

“As we sit here, our concentration is on winning the game at the weekend against a talented Tottenham team. If we arrive in 69 points at the end of the season and somehow don’t make it to the Champions League, then it’s been really, really unfortunate.

“Our focus is on finishing the season strong. Players have had an outstanding season. The staff, everyone, has had to work so hard in this pandemic with the fixture schedule.

“It’s been very tough for us, but we’ve managed to be competitive, and in our last game of the season, we’re fighting with two of Europe’s biggest clubs. We’ve got European football again next season, which is a target, and the FA Cup for the first time in the history of the Football Club.

“If I ask myself the question: ‘Have we improved?’ We most certainly have. Let’s hope we can finish this season with a win at the weekend.”

Rodgers confirmed that Jonny Evans will not be fit to return against Spurs, the defender having limped off during the club’s FA Cup final victory over Chelsea at Wembley.

“Jonny will miss out,” he confirmed. “Everyone else that was available the other night will be available for this game.”