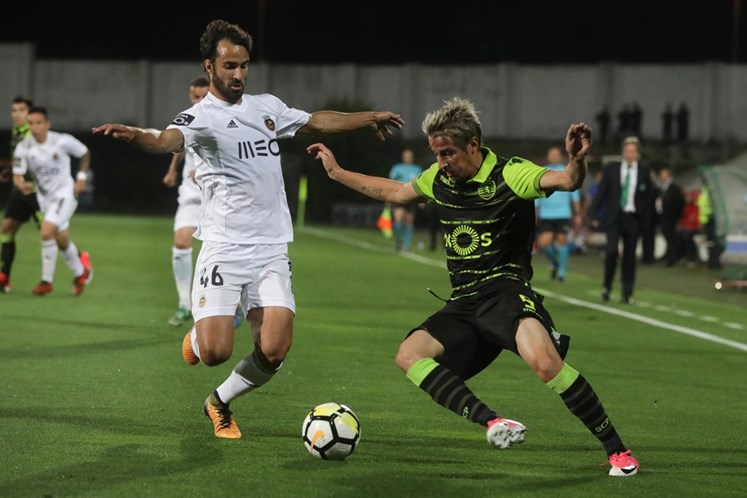 The Lions just managed to clinch a last-minute victory after an underwhelming performance in a game dominated by Rio Ave.

Sporting were confident that they’d grab another three points after thrashing Chaves the week before. However, the team was aware of the difficult task of playing in Rio Ave’s home ground and were reminded of last seasons’ match, that ended in a loss.

The game kicked off and it was Rio Ave who immediately made themselves a threat. In the second minute of the match, Ruben Ribeiro sought out Barreto with a great through pass from half-way. The attacker ran up the field before attempting a shot that ended up going wide.

It was less than three minutes later that the home team tried another shot at scoring. Ruben Ribeiro, from a difficult angle from outside the box, aimed a shot towards the goal. It travelled fast but was misguided, as it missed the space between the goalposts and went out.

10 minutes into the game, Sporting had a wasted first chance at goal. A cross awarded to the Lisbon club saw Acuña deliver the ball to Coates in the centre of the penalty area. But he received it poorly and the ball bounced off him safely towards the keeper.

It was only 20 minutes in that there was another goal opportunity, again by Sporting. Acuña, from outside the box, delivered a dangerously strong shot that, unfortunately for the player, just grazed over the crossbar.

The most dangerous attempt of the first half clearly happened in the 32nd minute of the match. Lionn received the ball on the right flank and immediately crossed it into the box. It flew towards João Novais, who confidently headed to score, but Patricio denied the goal by pulled off an amazing save.

The last shot on target in the first half came again from Rio Ave´s attackers. After a good play by the home team, Barreto struck the ball powerfully, resulting in a good shot that grazed the grass, but that ultimately ended up in Patricio’s safe hands.

Half-time arrived with Rio Ave clearly on top of the match. The Sporting squad had to react quickly so as not to lose any precious points.

It all continued as before though, as the underdogs achieved another hugely dangerous shot on goal. Barreto, charging forward, moved skillfully to get a clear position to score. He then whirled a stunning shot towards the top right corner, but once again, Rui Patricio miraculously reached the ball to get it away.

Sporting finally got their first shot on target of the match after nearly 70 minutes of game-time and at first, it seemed like they had scored. Bas Dost, on the edge of the box, managed a crucial pass to Bruno Fernandes on the left, who was left unmarked. The Portuguese then got a good low shot past Cassio and the team burst into joy. It was shortlived though, as the Video Assistant Referee denied the goal by cause of an offside position.

A few minutes later, Rio Ave were close to scoring yet again. Ruben Ribeiro delivered a good shot from inside the area that just went past the right post.

Miss of the season?

It was close to the end of the match when arguably the miss of the season occurred. Rio Ave pulled off yet another terrific outside-the-box shot, this time by Nuno Santos’ feet. Patricio maintained his excellent form by another great save, but only managed to parry the ball and it was left unattended for the oncoming attacker. It seemed hopeless for the defence as Guedes raced towards the ball but, although it was only a few metres from the goal-line and the keeper was on the floor, the striker achieved the impossible by sending the ball over the goal towards the stands.

Sporting took advantage of their opponents temporary annoyance and, although they were underperforming, scored the goal to win them the match. From the left wing, Battaglia crossed the ball nicely into the box. Bas Dost launched himself forwards, resulting in a headed post-and-in goal.

Rio Ave were distraught, but still active for the remainder of the game. In the 89th minute, the ball was crossed from a free-kick and was met by Guedes, who this time aimed it towards the goal. Unfortunately for him, “Saint” Patricio was still in the game and therefore saved his team once more.

A last desperate attempt by the home team was close to becoming a goal. Ruben Ribeiro dribbled efficiently past an opposing defender and crossed the ball low into the box. It glided past the goalposts and a small touch from any player would have resulted in a certain goal, but nobody reached it.

The match finally ended for both teams. Frustration ensued from the home end, whilst the Lions let out a huge sigh of relief from a good result in a disappointing match, clearly dominated by Rio Ave.

Sporting now temporarily lead the league table, as Porto have yet to play this week, and continue undefeated in Portugal. They now have a crucial Champions League match against Italian giants Juventus to prepare for.