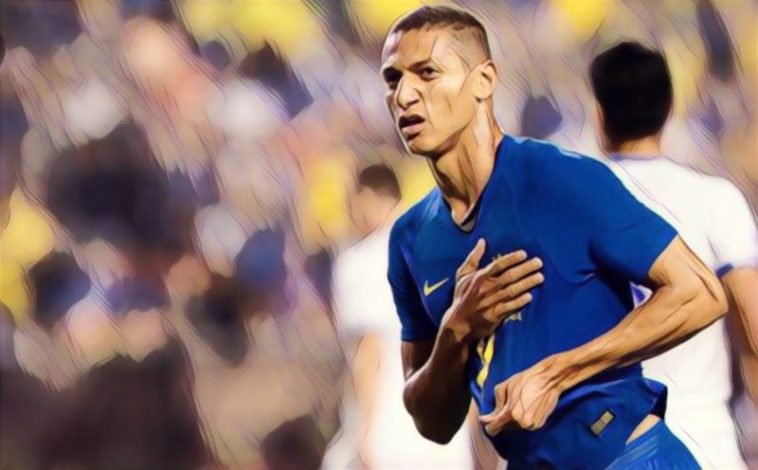 Everton winger Richarlison has that he watches PSG and Brazil ace Neymar in order to improve his own game, describing him as his idol.

Plenty of eyebrows were raised when Everton agreed to pay a reported £50 million to sign the Brazilian, who had only scored five Premier League goals during his time at Watford, although it has since been confirmed that some of that fee was a sweetener for the Toffees heavy pursuit of Marco Silva last year.

Richarlison has however got off to a flier at Goodison Park, scoring three goals in his opening three games , although he was sent off for a childish headbutt against Bournemouth, earning him a three-game ban.

His fine start to the season earned him a place in Tite’s Brazil squad recently where he continued his fine form, scoring two goals on his international debut. Speaking ahead of his return to action against Arsenal on Sunday, he revealed that the £200 million PSG ace, Neymar, is his idol and he studies his game in order to try and emulate his success:

“I have my goals for Brazil on my phone now. On the flight back from New York to Liverpool, I watched it about 50 times,” Richarlison told the Telegraph.

“Whenever we are en route to the game on the bus I am always watching the goals of Ronaldo [the Brazilian], Adriano and Neymar to get inspiration. Then when I am on the pitch I try to replicate what they do. I will watch it on the way to the game [on Sunday] and I also watch some of my own goals now to see the good things I have done as a player.”

Not only does the former Watford winger try to emulate his idol on the pitch, but even has tried to copy some of his hairstyles, but not to great effect.

“I didn’t quite pull it off because I didn’t really have the right hair products,” he continued.

“It would stay up for five minutes and then just flop down, so it didn’t really work.

“I did tell him about the haircut. I remembered and during lunchtime one day I told him and this made the whole room fall about laughing. They thought it was hilarious. Neymar is an idol of mine, he’s been an idol of mine since my childhood. I’ve always followed his progress, always tried to mirror myself in the way he plays. Playing with him was a really happy experience, it was great to have played alongside all these world-class players.”