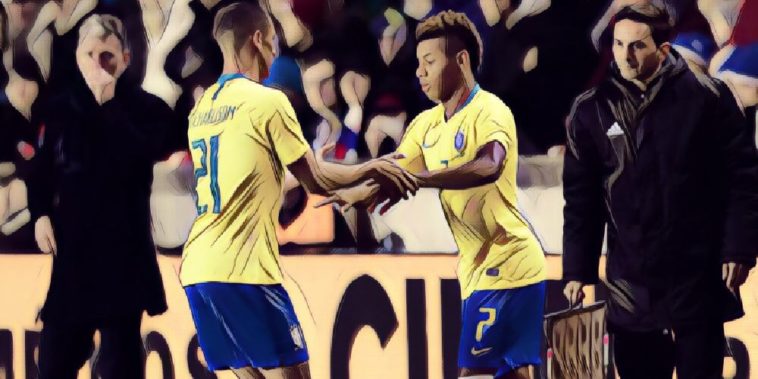 Everton forward Richarlison has said he hopes David Neres joins him at Goodison Park next season following talk of a potential transfer.

The 22-year-old has been linked with a move to Everton this summer, with the Brazilian being one of a number of players linked with leaving Ajax this season following their superb season both domestically and in Europe, winning the league and cup double as well as reaching the Champions League semi-finals.

Neres is currently on international duty with Brazil at the Copa America, where he started in the 3-0 win over Bolivia, with Everton winger Richarlison starting on the other flank.

Speaking after the game, the Toffees forward encouraged his compatriot to join him at Goodison Park next season.

“Yeah, I read something about that,” Richarlison told the Liverpool Echo.

“I’ve spoken to him about it already. I told him the doors are open for him there, and that he could help us a lot.

“I hope he comes. He’d be very welcome there. I’ve known him since we played together for Brazil’s U20 side, and he’s a guy I get along with really well. Hopefully I’ll see him there.”

Richarlison added the Neres has ‘the right profile’ to fit in in Marco Silva’s side.

“He’s a player who really attacks defenders and runs at his marker, so he’s got the right profile. With me and Bernard there, it would work really well.”