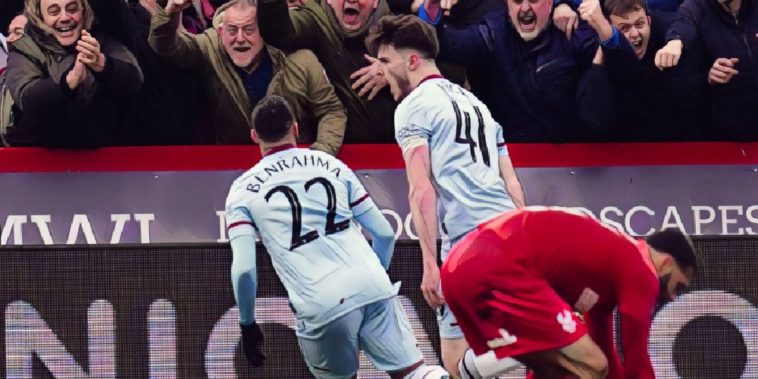 West Ham survived a massive scare as they left it late to book their place in the FA Cup fifth round, after being behind for large spells of their game against non-league Kidderminster.

It’s been 42 years since West Ham fans last saw their side lift a major piece of silverware, and despite still being in the Europa League and in the hunt for a top four finish, the FA Cup perhaps represents the best chance of ending that drought, with David Moyes sending out a strong side at Aggbrough Stadium.

It was a somewhat typical cup tie on windy afternoon and on a bobbly pitch that saw the hosts settle the better of the two sides, and with 19 minutes on the clock, Kidderminster would take the lead. A poor pass allowed Amari Morgan-Smith to nip in and draw a foul, before they swung the ball into the box from the resulting free-kick. Alphonse Areola failed to deal with it with his punch, the ball dropping for Alex Penny who calmly slotted home.

While West Ham unsurprisingly dominated possession of the ball, they really were poor with it, their first shot on target not coming until well into the second half, with the Premier League side looking decidedly off the pace and increasingly out of ideas despite their mid-season break.

However, they would finally produce a moment of quality in second half stoppage time to break Kidderminster hearts. Declan Rice picked up the ball in his own half and drove forward, laying the ball off to Pablo Fornals before continuing his run into the box. The Spanish midfielder picked out the run of the England international who thrashed the ball home into the roof of the net to spare his side’s blushes and take the game to extra time.

Jarrod Bowen had a chance to put the Hammers ahead though was denied by an excellent block by Caleb Richards, while Bowen also saw an effort chalked off as West Ham went in search of a winner.

However, with the game looking like it was heading to penalties, West Ham would eventually crush Kidderminster hearts for a second time. Andriy Yarmolenko floated the ball towards Aaron Cresswell who squared it back across the box to Bowen, who tapped home with what was virtually the last kick of the game.

Jarrod Bowen wins it at the death for @WestHam! #EmiratesFACup pic.twitter.com/43RYFHgnKH

The introduction of Declan Rice at half time had given the Hammers a much-needed lift and added impetus, and speaking after the game, the 23-year-old was full of praise of the side ranked 113 places below them in the league pyramid.

“Massive, massive respect to Kidderminster,” he told the BBC. “We watched some videos of them this week and they’ve been flying. You could see it on the bench with their manager.

“We weren’t at our best today and scraped it with two goals. They probably deserved it if I’m being honest. We need to improve if we want to push on but massive congratulations to them because they were excellent.

“The fans are on top of you and they will fight for every ball. It can be a shock to the system. We know what to expect but it’s hard to get to grips with. They were in great shape, pressed hard and they made some great substitutions but we’re through to the next round so that’s the most important thing.”