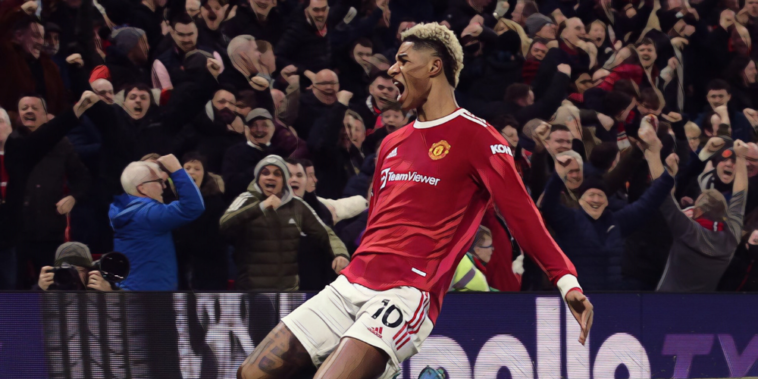 There’s nothing quite like a last-minute winner in the Premier League, a late goal to seal all three points and send the crowd into chaos.

Marcus Rashford’s stoppage-time strike against West Ham recently boosted Manchester United’s top-four hopes, the England international firing home the only goal of the game to help his side leapfrog the beaten Hammers into the Champions League places.

Rashford’s goal was the fourth time he has rescued the Red Devils, with no Premier League player having ever score more 90th-minute winners.

We’ve decided to look at the six Premier League players to have netted the most last-minute winning goals.

An Arsenal icon and one of the Premier League’s finest forwards during the first decade of the division, Ian Wright scored 185 goals in all competitions during an unforgettable career in North London.

He finished as the Gunners’ leading scorer for six successive seasons, helping Arsenal to a series of cup successes in the early nineties including a domestic cup double and the 1994 European Cup Winners’ Cup.

Two of this late winners came during the 1993/94 season, scoring decisive goals to snatch victories against Sheffield Wednesday and Aston Villa respectively.

Steven Gerrard so often came to the rescue for Liverpool during his career with the club, the former captain having enjoyed some remarkable moments including that crucial goal against Olympiacos and a dramatic FA Cup final equaliser against West Ham.

He also netted four last-minute winners in the Premier League for the Reds, his first coming with an individual effort against Charlton in 2002/03 as the midfielder began to forge his reputation as the Merseysider’s savour.

Gerrard also scored late winning goals in wins over Derby and Middlesbrough, whilst he held his nerve from the penalty spot to convert in a dramatic 3-2 win at Fulham during the 2013/14 campaign.

Papiss Cisse enjoyed one of the Premier League’s most remarkable impacts after signing for Newcastle, the winter window signing exploding in English football with a run of goals for Alan Pardew’s side.

Cisse signed from Freiburg and scored 13 goals in just 13 league starts for the Magpies, as Newcastle narrowly missed out on Champions League football during the 2011/12 season.

Cisse also scored a late winner against Crystal Palace in 2013/14, heading home in the fourth minute of stoppage-time to seal a 1-0 win at St James’ Park.

The towering Belgian has been a menace for Premier League backlines for several seasons, first in the colours of Aston Villa before making big-money moves to Liverpool and Crystal Palace.

Benteke enjoyed the most prolific period of his Premier League career at Villa Park, scoring 42 goals in 89 league appearances across his three seasons at the club.

He netted a last-minute winner for Villa in a Midlands derby against West Brom in 2013/14, converting a pressure penalty in the fourth minute of stoppage time.

Benteke also scored a last-minute winner for Liverpool from the spot during a single season at Anfield, before twice scoring decisive stoppage-time winners since moving to Palace in 2016. His most recent came last season, snatching all three points for the Eagles at rivals Brighton.

Sadio Mane is among the six players to have scored four last-minute winners in the Premier League, with the Senegal international having scored some truly unforgettable goals at Liverpool.

Mane struck in the 94th minute at Everton to seal a 1-0 win for the travelling Reds, one of the most memorable moments in clashes between the two rivals in recent seasons.

The forward also scored a late, late winning goal at Aston Villa in the 2019/20 season, as Liverpool came from behind to seal a comeback win and maintain their push towards the Premier League title.

Rashford has been an important part of the Manchester United side since his exciting emergence as a teenager, scoring 93 goals in 288 appearances across all competitions for the Red Devils.

The 24-year-old has scored last-minute Premier League winners against Hull, Bournemouth and Wolves, but his most recent effort could be the most important of his career to date.

Marcus Rashford has scored more 90th-minute winners in the Premier League than any other Man Utd player in the competition's history:

Rashford’s goal has moved Ralf Rangnick’s side above West Ham and into the top four, as the club look to beat off competition from a number of rivals and seal Champions League qualification this season.

Just four points currently separate the fourth-placed Red Devils and Wolves in eighth, in a race that could go down to the wire.