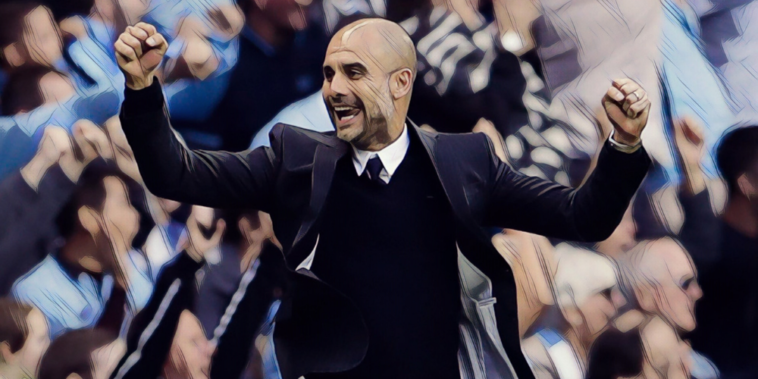 Since taking the reigns at Manchester City in 2016, Pep Guardiola has taken both the club – and the Premier League – to new heights, with three title successes in the past four years and an attacking brand of football that has no doubt rubbed off on the rest of English football.

While success hasn’t come cheap for City – with almost £1 billion spent since he walked in the door five years ago – there’s no denying they are now firmly one of the best sides in Europe, with Champions League success seemingly a formality in the years to come.

That didn’t necessarily look the case when he first took the job, with the squad in need of a significant refresh, having only finished fourth the previous season under predecessor Manuel Pellegrini.

A quick look at the City side in Guardiola’s first-ever top-flight game in English football and it’s easy to forget how far they’ve come, with an underwhelming and injury-hit team scraping a 2-1 win at home to Sunderland, courtesy of an 87th-minute Paddy McNair own goal.

Here is that City starting XI from back in August 2016:

Guardiola demonstrated his ruthless streak early on as he made the bold decision to drop England number one Joe Hart, with the goalkeeper returning from a disastrous Euro 2016 to find he was surplus to requirements.

With Hart’s eventual replacement Claudio Bravo not arriving until later in the window, up stepped Willy Caballero to take the starting berth for the first few games of the season, having largely been a back-up option since his arrival from Malaga in 2014.

The Argentine had little to do against Sunderland as the hosts dominated possession, although he did well to deny Jermain Defoe from close range and could do little about the striker’s second-half strike.

Caballero would leave the club at the end of the season, making the switch to rivals Chelsea where he remained until departing at the end of his contract last summer.

Guardiola chose to sign three new full-backs the following summer, after he had inherited an ageing crop of defenders that included right-back Bacary Sagna.

Sagna was one of a handful of players who traded the Emirates for the Etihad at the start of the last decade, making the switch to Manchester in 2014 after seven years with Arsenal.

Pablo Zabaleta’s presence meant the Frenchman featured just nine times in the league during his debut campaign, before featuring more prominently during his second season.

His third and final year at the club – which came under the new boss – saw him share right-back responsibilities with Zabaleta, before both men were allowed to leave at the end of the season.

The most expensive signing in a busy summer for the club, £50m man John Stones looked to be the perfect recruit for the new City boss, with his quality on the ball making him the ideal centre-back to play the former Barcelona man’s attacking brand of football.

While he enjoyed a composed debut against David Moyes’ side, there were a few notably erratic moments in his first season at City, most memorably in the Champions League exit against Monaco.

Stones time with the club has been turbulent with spells in and out of favour, but his best he remains a top-class central defender, as he demonstrated last term as City romped to the title, with his partnership with Ruben Dias the bedrock of that success.

Injuries to both Nicolas Otamendi and captain Vincent Kompany forced Guardiola to deploy Aleksandar Kolarov in the centre of a makeshift backline, with the Serbian primarily having been an attacking full-back during his time at the club.

The former Lazio man looked assured and enjoyed a positive final season at the club, featuring regularly before bringing an end to his seven-season spell at the Etihad with a move to Roma.

Kolarov currently plays his football with Inter Milan, the 35-year-old having formed part of the side that won a first Serie A title in over a decade during the 2020/21 campaign.

Like Sagna, Gael Clichy was another player tho made the move from north London to Manchester, arriving from Arsenal in 2011 and contributing to the club’s first Premier League title during his debut season.

Clichy’s made 25 league appearances during the 2016/17 season as he competed with Kolarov for a place in the side, before moving on at the end of the campaign as Guardiola brought wholesale changes to his defence.

After leaving City, the Frenchman moved to Turkey to join Istanbul Basaksehir and played key role in securing the club’s first ever league title for the club in the 2019/20 campaign.

While the backline is unrecognisable from the team of today, the midfield and attack has a very familiar feel about it, with most of the 2016 starters still at the club.

One man who has remained a vital player despite being well into his thirties is Fernandinho, with the Brazilian arguably the best defensive midfielder in the league for a time, having been elevated by the arrival of Guardiola as manager.

With so much roaming attacking talent ahead of him – and often a shaky backline behind him – the 36-year-old has so often been the glue holding everything together as the midfield pivot, with his display against Sunderland a sign of things to come under the new boss as he put in a man of the match display.

The arrival of fellow midfielder Rodri – as well as his age – has seen his involvement limited in recent times, although he remains Guardiola’s trusted midfield general.

For some the greatest player ever to have adorned the light blue jersey, David Silva is an absolute icon at the Etihad, with that status recently recognised by the club’s decision to place a statue of the Spaniard outside of their home ground.

Having joined the club from Valencia in 2010, the playmaker had long been a key man before the arrival of the new boss, but would reach new heights post-2016, notably starring as part of City’s ‘Centurions’ which romped to the title with a record haul of 100 points in the 2017/18 season.

After ten trophy-laden years at the club, the World Cup winner opted to return to Spain in 2020 to make the switch to Real Sociedad, where the 35-year-old helped the La Liga side secure a first major honour since 1987 after winning the Copa del Rey.

The other half of a devastating attacking midfield combo, Kevin De Bruyne is City’s current talisman and arguably the best player in the Premier League, having been so pivotal in the sensational levels set by Guardiola’s side in recent years.

Having failed to make the grade at Chelsea, there were those who questioned the Belgian’s £54m move to the Etihad in the summer of 2015, yet he swiftly silenced any doubters with an impressive debut campaign – and hasn’t looked back since.

Arguably his finest hour came during the 2019/20 season, in which the former Wolfsburg man registered a joint Premier League record haul of 20 assists in a single campaign, matching the tally previously set by Thierry Henry.

Still only 30, De Bruyne looks set to be a mainstay of this City side for years to come yet.

One of a handful of arrivals in the summer of 2016, Spanish winger Nolito never really settled at the club and spent just a solitary season with the Cityzens.

Handed his debut at Barcelona during Guardiola’s tenure, the two reunited six years later with the winger joining from Celta Vigo.

While he made a bright start to life in England, including an impressive display against the Black Cats on debut, the forward quickly faded from view as the season progressed, going on to make just 19 league appearances and ending the campaign with just four league goals.

Raheem Sterling has a lot to thank his current manager for, with Guardiola having turned a talented young player into a world-beater in recent years.

Burdened with the pressure of a mega-money switch from Liverpool, the Englishman struggled to begin with in his new surroundings, before rapid improvements following Guardiola’s arrival as manager.

Sterling has developed into a productive wide player and has now scored over a century of goals for City, but has seen his game-time reduced recently at club level despite starring for England at Euro 2020.

Sterling played a pivotal role in helping City make a fast start against Sunderland, winning a penalty after a drawing foul from Patrick Van Aanholt, with Sergio Aguero duly converting.

Speaking of the Argentine, there were doubts prior to Guardiola’s arrival as to whether to striker had the work rate required to lead the line in the manager’s system, though he quickly dispelled any doubts by firing in a career-best tally of 33 goals in all competitions in the 2016/17 season

He had already cemented cult status for that goal on the final day of the 2011/12 season, before enhancing his reputation further by becoming the club’s record goalscorer with 260 goals during a decade spell at the Etihad.

The 33-year-old – who netted the first competitive goal of the Guardiola era at City against Sunderland –  joined Barcelona on a free transfer at the end of the 2020/21 season, although is currently sidelined with injury.

The 2016/17 campaign proved to be the last for Jesus Navas at the club, with the new manager making wholesale changes in his second summer transfer window.

The Spaniard had originally arrived from Sevilla in 2013 and went on to feature heavily under Manuel Pellegrini, albeit while facing criticism at times for a lack of end product to go with his blistering speed.

That said, he made a telling impact in the season opener back in 2016, coming off the bench early in the second-half to play his part in the winner, firing the ball across the box in the build-up to McNair’s unfortunate own goal.

Having returned to Seville in 2017, the 35-year-old is still a key player for the La Liga side and is the only player to have played over 500 games for the club.

Delph replaced David Silva midway through the second-half in a midfield role, although the best spell of his City career was spent at left-back, as he featured heavily in that position during the remarkable 2017/18 campaign.

He made the switch to the Etihad in 2015 from Aston Villa, with the club captain initially professing his commitment to the Midlands side, before reversing his decision just days later.

Since leaving City in 2019, the England international has endured a frustrating and injury-plagued stint at Everton.

A late replacement for Clichy in the game, the Nigerian spent two seasons as a Manchester City player after joining the club in 2015.

An impressive debut campaign saw him score 14 goals in all competitions, but he struggled to repeat that haul the following season before a move to Leicester City.

He had shown glimpses of his lethal finishing prowess while at the Etihad and is beginning to emerge as a regular goalscorer for the Foxes, notably netting 19 goals in all competitions last season.