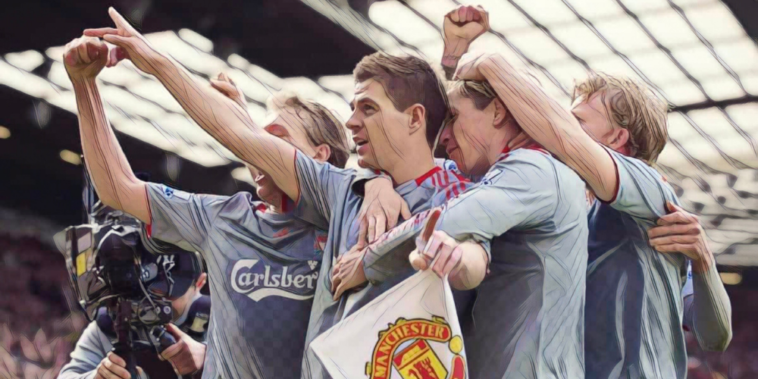 Liverpool and Manchester United is arguably the Premier League’s biggest rivalry, the two cites having historically been in industrial and economic competition in the north west.

At the centre of each city are two huge football clubs, the most successful sides in English football history and two teams who have enjoyed sustained periods of domestic dominance.

The north-west rivals share 39 top-division titles between them, but have rarely gone head-to-head for major honours despite the wealth of silverware that has arrived in Manchester and Merseyside respectively.

However, the 2008/09 season saw the two teams directly battle it out for supremacy, becoming embroiled in a tense title race ahead of a crunch meeting at Old Trafford.

Liverpool – in need of a win to keep their hopes of catching the Red Devils alive – came from behind to secure a statement result and an emphatic 4-1 win at the home of their biggest rivals.

It was ultimately Sir Alex Ferguson’s beaten side who claimed the title by a margin of four points, but it remains one of the most memorable Premier League meetings between the two sides

We remember the Liverpool XI that ran riot at Old Trafford in 2009.

Reina formed part of a Liverpool side that boasted one of the Premier League’s best defences during his first seasons at Anfield, winning the division’s Golden Glove accolade in three consecutive campaigns between 2006 and 2008.

The Spanish shot-stopper made 396 appearances across eight seasons with the Reds, and recovered from a shaky start – bringing down Park Ji-sung to concede a penalty for Cristiano Ronaldo’s opener – as Liverpool won at Old Trafford.

Carragher was shifted to right-back for the clash to accommodate Hyypia in the starting side, after Alvaro Arbeloa sustained a hamstring strain during the warm-up.

The defender producing a typically determined performance despite being exposed for pace on occasion, though was booked for a foul on Carlos Tevez.

Carragher spent his entire career with Liverpool and made 737 appearances for the Reds in total, with only Ian Callaghan having ever represented the club on more occasions.

He won seven major honours including the Champions League and two FA Cups, but the Premier League proved elusive with two runners-up finishes – including in 2008/09 – the closest he came to league success.

Martin Skrtel spent eight seasons as a Liverpool player, the Slovakian centre-back mixing fine performances with indifferent displays throughout the course of his time at Anfield.

His £6.5m arrival from Zenit St Petersburg proved a fine investment given the defender made 320 appearances for the club, whilst he was named as the Reds’ Player of the Season following an impressive 2011/12 campaign.

Skrtel was a solid performer during the win over Manchester United, his performance including a long pass from inside his own area that released Fernando Torres for Liverpool’s equalising goal.

The veteran was into the final season of a stellar Liverpool career during the 2008/09 campaign, with the towering Finland international recalled to the starting side following Arbeloa’s injury.

Hyypia used all of his experience during a commanding performance at Old Trafford, the defender having rarely disappointed during a decade at Anfield.

Arriving as an unknown from Willem II in the late nineties, his £2.6m fee proved one of the Reds’ greatest Premier League bargains as he established himself as one of the leading centre-backs in English football.

Hyypia won six major trophies including the club’s cup treble in 2000/01 and Champions League success four seasons later, captaining the side for a period before handing the armband to an emerging Steven Gerrard.

Aurelio was a classy performer whenever included in the Liverpool side, but continued problems with injury prevented the Brazilian left-back from ever fulfilling his potential in the Premier League.

Amongst the highlights of Aurelio’s time with Liverpool came during their 4-1 win at United, however, bending home a sublime free-kick after Steven Gerrard had been hauled down by Nemanja Vidic.

It was a moment that encapsulated the quality the full-back possessed and all but assured the result after putting the visitors 3-1 ahead.

Having failed to make an impression following a shock move to West Ham, the midfielder justified the hype that greeted his arrival in England following a move to Liverpool.

The combative Argentine became a fans’ favourite during three-and-a-half seasons with the club and produced a typically tenacious performance as one of Liverpool’s two holding midfielders at Old Trafford.

He made 139 appearances for Liverpool before signing for Barcelona in 2010, where he further emphasised his status as one of the game’s best defensive midfielders, winning five league titles and two Champions League trophies with the Spanish giants.

Included in the starting side following a calf injury to Xabi Alonso, the midfielder’s selfless showing was a microcosm of the attributes that made him a popular figure during a decade on Merseyside.

The Brazilian came out on top during his midfield battle with Michael Carrick, working hard in the Reds’ engine room to give Rafael Benitez’s side a foothold in the game.

Lucas made 346 appearances for the Reds before signing for Lazio in 2017 and remains a key figure for the Serie A side.

Another who became a firm favourite for his never-ending energy, Kuyt’s relentless running was a feature of his game across six seasons in the Premier League.

Initially signed as a centre-forward from Feyenoord, he was converted to a right-sided attacker during his time on Merseyside and developed a penchant for scoring goals at crucial moments.

Kuyt failed to truly impact the win at Manchester United, but did enjoy a performance to savour against the Red Devils two seasons later after netting a close-range hat-trick in a 3-1 win at Anfield.

Riera’s arrival ahead of the 2008/09 season brought balance to the Liverpool left, but the Spanish winger often lacked end product and scored just three league goals for the campaign.

He was ineffective during the win at Old Trafford and substituted in favour of the more defensively-minded Andrea Dossena with half an hour remaining, whilst he fell out of favour during his second season with Liverpool before signing for Olympiacos.

Gerrard enjoyed one of his finest individual campaigns during the 2008/09 season, being named as the FWA Footballer of the Year after flourishing in an advanced ‘second striker’ role behind Fernando Torres.

The Liverpool captain scored a career-best 16 Premier League goals and 24 in all competitions, including putting the Reds ahead from the penalty spot at Manchester United after being brought down by Patrice Evra.

Gerrard’s explosive runs also saw him hauled down by Nemanja Vidic with the Serbia centre-back subsequently sent off, with the midfielder having often proven the scourge of the Red Devils during his Liverpool career.

He added the PFA Fans’ Player of the Year award alongside his Football Writers’ accolade at the end of the season, though missed out on winning an elusive Premier League title.

The architect of Liverpool’s destruction of their biggest rivals, Fernando Torres gave the Red Devils’ backline a torrid time at Old Trafford.

The Spaniard’s pace and power led to Nemanja Vidic’s mistake and Liverpool’s equalising goal, as Torres got the better of the hesitant defender to fire beyond Edwin van der Sar.

Torres was arguably Europe’s leading centre-forward during a brief period at Liverpool, scoring 81 goals in 142 appearances and terrorising defences with his movement and clinical touch.

He featured in just 24 league games (scoring 14 goals) during the 2008/09 season, however, an absence which perhaps prevented Liverpool from overhauling their great rivals in the title race.

Andrea Dossena’s career with Liverpool was entirely forgettable, but for his role in two of the club’s finest performances in recent memory.

Liverpool had thrashed Real Madrid 4-0 in the Champions League in midweek with Dossena coming off the bench to seal the win, before the Italian repeated the feat at Old Trafford after racing away to lift a delightful finish over Edwin van der Sar.

Introduced as a late substitute to add some energy and pace into the forward line, Babel was lively during the closing stages of a memorable win at Old Trafford.

The Dutch forward arrived from Ajax amid much fanfare in 2006, but despite flashes of brilliant ability was never capable of putting together a consistent run of performances.

He made 146 appearances for the club – a high percentage of which came as a substitute – and scored 22 goals, before enjoying a nomadic career that included a brief loan return to the Premier League at Fulham in 2019.

The 34-year-old currently plays his football in Turkey with Galatasaray.

One regarded as a bright prospect at Liverpool, the Moroccan failed to make an impact during five seasons as a Liverpool player and made just 21 goalless league appearances for the club.

His career has since been spent mostly in Spain, representing clubs including Levante, Las Palmas and Leganes.