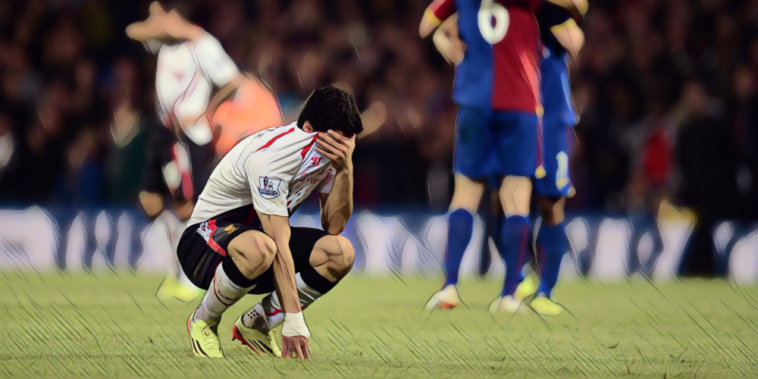 Liverpool travel to face Crystal Palace in the Premier League this weekend, the scene of one of the most memorable match-ups in recent seasons.

Liverpool travelled to face the Eagles in the penultimate fixture of the 2013/14 campaign, with Brendan Rodgers’ side in contention for a first league title since 1990.

Defeat to Chelsea the previous week meant only a win would do for the Reds, who needed maximum points and a swing in goal difference to beat Manchester City to the title.

Liverpool raced into a three-goal lead inside the opening hour at Selhurst Park, but their naivety in pushing forward for more goals saw a fun but flawed side collapse to squander all three points.

Palace’s stirring comeback – which included a late brace from Dwight Gayle – was subsequently christened ‘Crystanbul’, an ode to the Reds’ own three-goal fightback during the 2005 Champions League final.

Ahead of this weekend’s meeting between the sides we remember the Liverpool XI who spectacularly capitulated at Crystal Palace.

The Belgium international had his moments at Liverpool without ever truly convincing, making 204 appearances across all competitions following his arrival from Sunderland.

The 2013/14 season was his first with the club and he saved a penalty during a win over Stoke on debut, but was part of a defence that conceded 50 goals as a fragile backline cost the Reds the title.

He was amongst the club’s better performers in the collapse at Palace, however, making a string of saves including brilliant reflex stop from Miles Jedinak.

The 33-year-old currently plays his football back in his homeland with Club Brugge.

Johnson’s performance perhaps symbolised Liverpool’s approach to the game, with the right-back dangerous when pushing forward but suspect defensively at Selhurst Park.

The former England international signed for Liverpool in an £18m deal from Portsmouth and spent six seasons at Anfield, becoming the regular right-back for both club and country.

Johnson’s best form saw him provide forward threat from full-back, but he became a target for critics during his latter seasons with Liverpool and took to Twitter to call out those targeting him following the collapse at Palace.

He saw Damien Delaney’s effort deflect off him for Palace’s first goal, before being beaten far too easily by Yannick Bolasie in the build-up the home side’s second.

Martin Skrtel was viewed as a long-term solution at centre-back following his arrival from Zenit Saint Ptersburg, but eight seasons as Liverpool player saw the defender struggle for consistency.

The Slovakia international appeared to have all the ingredients needed to be a leading Premier League centre-back, but infrequently utilised the best of his talent.

The 2013/14 season saw Skrtel’s score seven goals as the defender became a threatening target for set-pieces, but the all-too-often defensive mistakes cost his side – including in the draw at Selhurst Park.

Skrtel was part of a defence that dropped ever deeper as panic crept in and their title challenge all but ended.

Liverpool secured the signing of Mamadou Sakho from Paris Saint-Germain in the closing stages of the 2013 summer transfer window, bringing the France international to England in an £18m deal.

Sakho competed with Skrtel and Daniel Agger for a place in the side and made 18 league appearances during his debut season, featuring prominently during the season’s run-in.

He missed a glorious chance to score during the clash with Palace, before losing Gayle for the crucial equaliser as Liverpool’s defence proved their Achilles heel once again.

The Liverpool-born defender enjoyed the best season of his career in 2013/14, making 25 appearances in all competitions and winning admirers for his no-nonsense approach at left-back.

He failed to make a single appearance the following season due to knee issues and his career with the club never recovered, making just nine more appearances before moving on to Rangers.

The 29-year-old is currently with Danish side HB Køge, having been signed by former Liverpool teammate Daniel Agger.

Gerrard had been reinvented in a regista role under Brendan Rodgers, with the Liverpool captain enjoying a stellar season to score 13 goals and provide 13 assists in the Premier League.

The midfielder – determined to atone for his costly slip in defeat to Chelsea the previous week – providing the opening goal for Joe Allen, but was unable to halt the momentum of Palace’s fightback as Liverpool’s title challenge collapsed.

It was a particularly painful end to the season for Gerrard, who won every major honour but the Premier League during a Liverpool career in which he established himself as arguably the Reds’ greatest ever player.

Brendan Rodgers’ labelling of Allen as the ‘Welsh Xavi’ did little to aid the midfielder’s chances of becoming a success at Anfield, with the £15m signing from Swansea failing to truly establish himself during four seasons with Liverpool.

He made just 16 league starts in 2013/14 but was included in this side given Jordan Henderson’s suspension, scoring the first goal against Palace with an uncharacteristic header from Gerrard’s corner.

Allen moved on with Stoke in 2016 and has been with the now Championship side ever since, making almost 200 league appearances for the Potters.

Moved into a more advanced role in Liverpool’s midfield diamond to accommodate an ageing Gerrard, it was a position that failed to suit Lucas Leiva.

The Brazilian had become a fan favourite for his tenacity and work-rate during a decade with Liverpool, remaining a regular under five different managers before his exit for Lazio in 2017.

He ranks seventh for Premier League appearances for the Reds, his 247 more than Steve McManaman (240) and John Arne Riise (234).

Raheem Sterling was reinvented in a central role during Liverpool’s title challenge, operating at the top of a diamond and providing the ammunition to the club’s lethal front pairing.

Sterling enjoyed a real breakthrough campaign for Brendan Rodgers’ side in 2013/14, scoring nine league goals and providing five assists – including teeing up Luis Suarez for Liverpool’s third at Palace.

Sterling made 129 appearances for the Reds and scored 23 goals, before moving on to Manchester City in a £49m deal following the break-up of Rodgers’ title-challenging side.

He has since won three league titles among his eight major honours at the Etihad and earned 72 caps for England at senior level. He was also named as the FWA Footballer of the Year during the 2018/19 campaign as City won a domestic treble.

Daniel Sturridge enjoyed the best season of his career for Liverpool in 2013/14, finishing as runner-up for the Premier League’s Golden Boot to teammate Luis Suarez.

The devastating duo – dubbed the ‘SAS’ – scored 52 league goals between them, including one each in the draw at Crystal Palace.

Sturridge had recently returned to action following an ankle problem at Selhurst Park and was perhaps guilty of overindulging as Liverpool chased further goals in South London.

The forward failed to recapture the heights of his 2013/14 season during his latter campaigns with Liverpool, becoming a bit-part player during the Jurgen Klopp era as fitness issues robbed him of the explosiveness he once possessed.

The inspiration behind Liverpool’s pursuit of the title, Luis Suarez returned from an early-season suspension to enjoy one of the Premier League’s great individual seasons.

Suarez scored 31 goals from just 33 league appearances for Liverpool to be named as the PFA Player of the Year, his haul – none of which came from the penalty spot – also earning the forward the Premier League’s Golden Boot and European Golden Shoe.

Suarez was simply sensational throughout the campaign and scored in the draw with Palace, but was left in tears at full-time as the realisation that the Reds had blown their title hopes sank in.

He moved on to Barcelona at the end of the season in a £75m deal, scoring 198 goals to become the Catalan club’s third-highest goalscorer in addition to winning four league titles and the Champions League.

Coutinho was a surprise name amongst the substitutes after featuring prominently during Liverpool’s title challenge, his 78th-minute introduction coinciding with the Reds’ momentous collapse.

The Brazilian grew in importance over the following seasons to forge a reputation as one of the Premier League’s best creative talents, scoring a series of spectacular goals to attract interest from Spain’s superpowers.

He scored 54 goals and provided 41 assists in 201 appearances for Liverpool, before signing for Barcelona in a record-breaking £142m deal.

The move failed to work out despite trophy successes with Barcelona and Bayern Munich and the midfielder signed on loan with Aston Villa – reuniting with Steven Gerrard – in a bid to revive his career this month.

It can be quite easy to forget that Victor Moses was once a Liverpool player, the winger signing on a season-long loan deal from Chelsea.

Much of Moses’ career has involved loan deals at various clubs, spending spells with the Reds, Stoke, West Ham, Fenerbahce and Inter Milan during his time at Stamford Bridge.

The Nigerian made just six league starts for Liverpool, scoring once, and currently plays his football in Russia with Spartak Moscow.