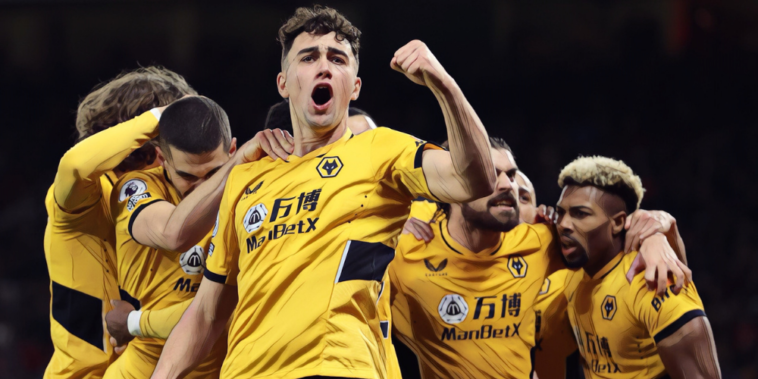 England will head to Qatar later this year amongst the favourites for World Cup success, with the Three Lions having reached the latter stages of consecutive major tournaments.

Gareth Southgate has an abundance of options to choose from with the Premier League thriving at present, but with nine months until the winter World Cup could we see a wildcard emerge and gatecrash the travelling squad?

We’ve looked at five uncapped players who are impressing in the Premier League this season, each pushing to be a part of Southgate’s plans.

West Ham fans are championing Jarrod Bowen’s credentials for the national side with the winger having been in brilliant form for David Moyes’ side this season.

The 25-year-old has formed part of a team once again pushing to upset the established order, with the Hammers having so far juggled European commitments and a push for a top-four finish.

Bowen has scored five league goals and provided a further seven assists so far this season, the latter haul bettered by only Mohamed Salah and Trent Alexander-Arnold.

Combined goals and assists across all competitions this season:

His 12 goal involvements are a leading total amongst all English players in the Premier League, whilst he now has 18 goals and assists in all competitions for West Ham this season.

Bowen’s best performances come when drifting inside from the right onto his favoured left foot, but he has shown versatility this season and operated at centre-forward when called upon.

With a number of direct competitors – including the likes of Jadon Sancho and Marcus Rashford – struggling for form this season, Southgate could choose to take a look at Bowen this summer as he finalises his plans for Qatar.

Southampton secured a steal with the signing of Tino Livramento from Chelsea last summer, the right-back choosing to depart the west Londoners in search of regular first-team football.

The £5m fee has proven a snip for a teenager who has started 18 league fixtures for the Saints this season, impressing with his maturity and drive from right-back.

Livramento – who ranks second in the Premier League for interceptions this season – was named as Chelsea’s Academy Player of the Year last season and has huge potential, but chose to leave given the Reece James-sized obstacle in his path at Stamford Bridge.

It’s a similar story at international level with England boasting an embarrassment of riches at right-back and Livramento – who has earned three u21 caps since his debut for the Young Lions last year – will be one to watch for the future.

Cobham has produced some excellent prospects in recent seasons and Livramento is another, both he and former Chelsea defender Tariq Lamptey amongst those waiting for a chance with the senior national side.

Centre-back is perhaps the area where Southgate’s options are least convincing, with Harry Maguire having endured a nightmare season so far and John Stones out of favour at Manchester City.

Max Kilman has emerged as a potential option for the Three Lions following a superb season for Wolves, who boast the division’s second-best defence with just 14 goals conceded in 2021/22.

Kilman has shown huge improvement this term and his mix of technical talent and physical stature make the 24-year-old an appealing option. Despite being left-footed, he has flourished on the right side of Wolves’ back three and has registered more progressive carries than any other teammate with his drives forward having become a familiar sight at Molineux.

His well-documented futsal background has benefitted his on-ball ability with Kilman possessing close control and confidence in possession, but his defensive game has improved this term and he betters the most recent centre-back call-ups – Harry Maguire, John Stones and Tyrone Mings – for tackles made, ground duels won and interceptions per 90 minutes.

Mings’ status as a left-footed defender has perhaps helped his inclusion in past squads and Kilman could now rival the Villa centre-back for a place in Southgate’s plans.

Trevoh Chalobah’s emergence has been one of the surprises of the season at Chelsea, the defender having impressed Thomas Tuchel in pre-season after his return from a loan spell at Lorient.

Few expected Chalobah to forge a career at Chelsea after three consecutive loan spells away from Stamford Bridge, but he has become a valuable member of the senior squad this season and has moved himself into England contention.

The 22-year-old has handled each challenge that has come his way in impressive fashion, demonstrating a fine temperament and the mentality to handle the pressure occasions.

Chalobah’s versatility – featuring as part of a back three and in defensive midfield – will improve his chances of international recognition and he was previously called in to train with the England squad as an 18-year-old in 2018, having impressed for the national side at youth level.

Ezri Konsa is an uncapped talent that has been namechecked by Gareth Southgate in the recent past, with the centre-back having enjoyed an excellent season in 2020/21 as Aston Villa kept 15 clean sheets.

Villa’s performances have not been as consistent this term, but Konsa has remained one of the club’s leading performers and his omission from the England squad during the autumn internationals was one bemoaned by the Villa support.

The 24-year-old has impressed in back four or back three system and betters centre-back partner Tyrone Mings – a regular in the England squad – on a number of metrics this season, including averaging more tackles and ground duels won per 90 minutes.

He is also superior in possession to Mings and comfortably outperforms the Villa captain in terms of pass accuracy (84% to 78%).

Konsa is one of a number of centre-backs on the fringes of Southgate’s plans, but has options should he continue to be overlooked with the defender also eligible to represent Portugal, Democratic Republic of Congo and Angola at international level.

Read Also – Opinion: Newfound riches will not save Newcastle from pending relegation