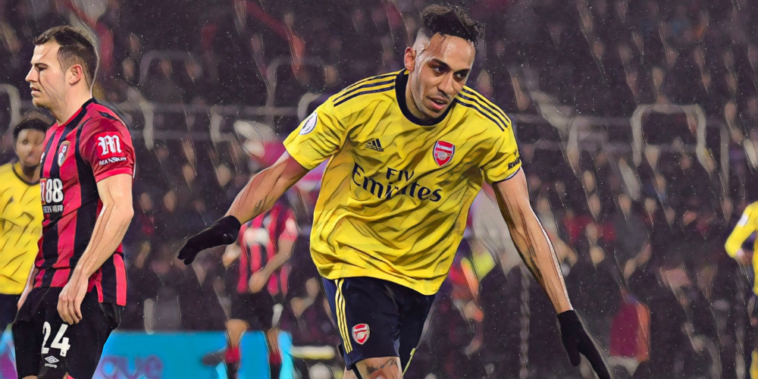 Mikel Arteta’s rebuild of Arsenal has continued this summer with the north Londoners again among the most active Premier League clubs of the transfer window.

The Spaniard has overseen an overhaul of the Gunners’ squad since first arriving as manager, with mass changes having seen Arteta move on underperforming and ageing assets to build an exciting young core of talent at the Emirates.

Arteta – who arrived having worked alongside Pep Guardiola at Manchester City – took charge of Arsenal for the first time on Boxing Day 2019, as the Gunners drew 1-1 at Bournemouth.

We’ve decided to look back at the XI from the 40-year-old’s first game in charge with his inaugural  team sheet rather different to his current set of options.

Leno was the first-choice goalkeeper at Arsenal upon Arteta’s arrival as manager, having signed for the club from Bayer Leverkusen in a £22.5m deal in June 2018.

He was named as runner-up for Arsenal’s Player of the Season award in 2019/20, but an injury saw him miss out on the Gunners’ FA Cup success with Emiliano Martinez impressing in his absence.

Martinez’s sale to Aston Villa that summer saw Leno remain the north London side’s number one, but he was relegated to second choice following the arrival of Aaron Ramsdale – coincidentally in goal for Bournemouth during Arteta’s first game – last summer.

Leno, who has made 125 appearances across all competitions for Arsenal, is expected to leave this summer in search of regular minutes and has been linked with Fulham.

Ainsley Maitland-Niles started at right-back during Arteta’s first game, a position in which the academy product earned five caps for England in 2020.

Having expressed a desire to feature in a central midfield role, Maitland-Niles has spent time on loan at West Brom and Roma across the past two seasons after falling out of favour at Arsenal.

Like Leno, he is expected to move on this summer as changes continue at the Emirates.

Sokratis featured regularly at centre-back across Arteta’s opening games in charge and scored during the Spaniard’s first victory, a 2-0 win over Manchester United on January 1.

The veteran Greek international helped Arsenal to FA Cup success in 2020, but was informed he was not part of the club’s plans moving forward at the end of the campaign.

He signed for Olympiacos on a free transfer that summer and has since made 63 appearances since returning to Greece, winning back-to-back Super League titles.

David Luiz arrived at Arsenal from Chelsea in an £8m deal during the 2020 summer window, but endured a disastrous debut campaign after crossing the capital.

The Brazilian set a new Premier League record after conceding five penalties across the season, whilst he was also the player with the most red cards after being sent off twice.

In a defeat to Manchester City, he became the first player to receive a red card, concede a penalty and commit an error leading to goal in a Premier League match for five seasons.

He did, however, impress as Arsenal beat former side Chelsea in the FA Cup final and remained with the Gunners the following season, making a further 20 league appearances before signing for Flamengo on a free transfer.

Bukayo Saka enjoyed a breakthrough campaign in 2019/20, establishing himself in the Arsenal side
following injuries to Sead Kolašinac and Kieran Tierney.

He made 38 appearances across all competitions and has since continued to grow in status in north London, winning back-to-back Player of the Season awards at the Emirates and breaking into the England side on a regular basis.

I’m so proud to win the @arsenal Player of The Season award again ! 🙏🏿

Thank you to all my Gooners for your constant support this year, this one is for you 🫶 pic.twitter.com/CGm3mdfpBd

Saka has shone in a more advanced role and scored 12 goals across all competitions last season with the winger regarded as one of the Premier League’s brightest young talents.

The first player to retain Arsenal’s Player of the Season award since Thierry Henry, he is one of the key figures Arteta will build around as the Gunners look to challenge for silverware across the coming campaigns.

Having impressed during his debut season in 2018/19, the midfielder featured regularly following Arteta’s arrival as manager.

An ankle injury in March saw Torreira miss much of the remainder of the campaign however, before he departed at the end of Arteta’s first half-season in charge.

The Uruguay international joined Atletico Madrid on loan, before a second successive loan spell with Fiorentina in 2021/22. He had been expected to join La Viola on a permanent deal this summer, though Fiorentina’s attempts to negotiate a lower fee have since seen a deal fail to materialise.

Granit Xhaka’s rollercoaster career at Arsenal has continued under Arteta’s management, with the Switzerland international another linked with a departure this summer despite playing a prominent role last season.

The 29-year-old failed to develop into the authoritative midfield presence many had hoped upon his arrival from Borussia Monchengladbach, mixing strong spells with poor performances and moment of ill-discipline.

The former club captain has made 250 appearances since signing for the north Londoners, but could be moved on as Arteta continues his refresh at the Emirates.

Mesut Ozil was one of the highest-profile casualties of Arteta’s arrival as manager, with the former club record signing ostracised ahead of the Spaniard’s first full campaign.

He had featured sporadically over the opening months of Arteta’s reign, before being omitted from Arsenal’s squads for the Premier League and Europa League after being informed he was not a part of the club’s plans.

Ozil eventually moved on to sign for Fenerbahce on a free transfer in January 2021, as Arsenal removed his huge contract from the wage bill.

His record contract signed in 2017 had supposed to have been a statement of intent for a side hoping to return to former glories, but ended as a financial burden during a miserable latter period for the German in north London.

Reiss Nelson remains an Arsenal player but is another whose future is uncertain, with the winger having failed to join the likes of Bukayo Saka and Emile Smith Rowe in breaking into the senior set-up.

Nelson was handed a chance in Arteta’s first game in charge and made seven league starts for the campaign, but struggled to build on that inclusion and featured for just 70 minutes in the Premier League in 2020/21.

He was loaned to Feyenoord last season and scored twice in 21 league appearances, with his future appearing away from north London as the 22-year-old looks to kick-start his career.

Pierre-Emerick Aubameyang scored the crucial equalising goal during Arteta’s first game and was the central figure in the side during his first months at the Emirates.

He ended the 2019/20 campaign with 29 goals in all competitions, including scoring match-winning braces in the semi-final and final as Arsenal won the FA Cup – becoming the first African footballer to captain his side to the trophy.

Aubameyang signed a new three-year deal the following season, though his performances dipped for the first time since arriving in north London.

He fell out of favour with Arteta during the 2021/22 campaign and was stripped of the captaincy for disciplinary reasons, before being allowed to join Barcelona on a free transfer in the winter window.

Alexandre Lacazette became the latest senior name to leave Arsenal after re-joining former side Lyon on a free transfer this summer.

The forward signed for the Gunners in a £46.5m deal from the French side in 2017 and scored 71 goals in 206 appearances across his five seasons at the Emirates, winning the club’s Player of the Season accolade in 2018/19.

He captained the side for much of last season following the exit of Aubameyang, but scored just four league goals for the campaign and was allowed to move on at the expiry of his contract.

Shkodran Mustafi proved a disappointing signing for Arsenal, failing to live up to the expectations that came with his £35m move from Valencia.

Mustafi terminated his deal at the Emirates after making just three league appearances during Areta’s first full season as manager, before signing a short-term deal with Schalke.

The centre-back returned to Spain with Levante last season, but made just eight league starts during the 2021/22 campaign.

Nicolas Pepe is another signing who has struggled to convince since a big-money move to Arsenal, with the club’s record signing having become a peripheral figure under Arteta.

Pepe signed for the Gunners in a £72m deal from Lille in 2019, having been courted by several leading sides across Europe. However, has since failed to turn his talent into consistent performances across three seasons in the Premier League.

Bukayo Saka’s emergence has restricted his opportunities in his favoured position and the Ivorian is expected to leave Arsenal this summer after making just five Premier League starts in 2021/22.

The Gunners will take a significant loss on any exit.

Joe Willock broke into the Arsenal side on a regular basis during the 2019/20 season, making 44 appearances across all competitions.

Just eight of his 29 league games came from the start however, and he joined Newcastle on loan during the 2020/21 season, scoring in seven straight games during a spectacular spell at St James’ Park.

His performances persuaded Newcastle to sign him on a permanent deal in 2021, spending £25m to bring the 22-year-old to the North East.