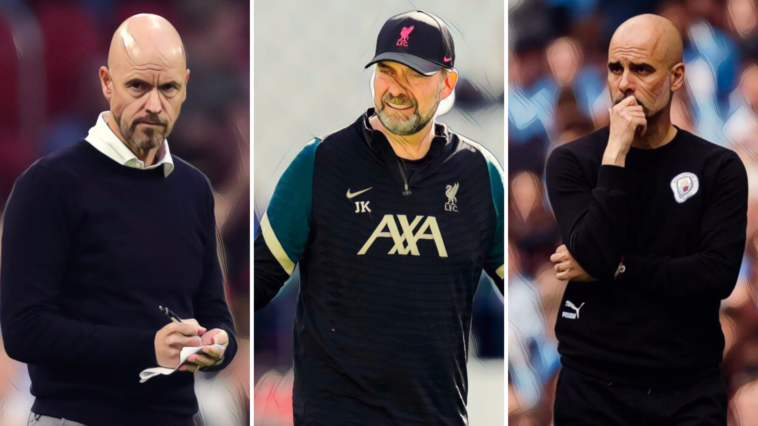 With the Premier League fixtures now released for 2022/23, we are able to assess each team’s start and see which of the division’s leading sides could race out of the traps.

The consistency of the top teams means dropped points in the campaign’s opening weeks can prove costly and we’ve assessed the difficulty of each ‘big six’ club’s beginning to the season.

We’ve ran the rule over the first six gameweeks and calculated the average league position of each team’s fixtures, based on last season’s performance. The newly-promoted teams have been placed at 18th (Fulham), 19th (Bournemouth) and 20th (Nottingham Forest) respectively.

Arsenal’s season ended in disappointment after missing out on Champions League football, the progress of Mikel Arteta’s side undone following a poor run of form that saw the Gunners lose six of their final 12 games of the campaign.

The north Londoners will hope for a strong start this time around after a disastrous opening to 2021/22, one which saw Arsenal bottom of the division in late August after three straight defeats and no goals scored.

💬 "We want to see a club like Arsenal with a young squad, an exciting squad, with a big big future." pic.twitter.com/KgiQVQMd0K

For the second season in a row Arsenal will kick-off the campaign in an away London derby, taking on Crystal Palace at Selhurst Park on August 5.

Palace finished the season 12th in the Premier League, but the Eagles expected goals against (xGA) ranked behind only the top two in home fixtures last season.

Arsenal then face a Leicester team who will hope to bounce back from an inconsistent season last time around, before back-to-back games with newly-promoted sides.

An away clash with Manchester United in early September will be one to watch in the race for a top four finish.

In terms of average finishing position in 2021/22, Chelsea boast the second most difficult run of games among the Premier League’s big six.

Thomas Tuchel’s side take on three of last season’s top eight in Tottenham, Leicester and West Ham, each of who will visit Stamford Bridge in the opening six weeks.

Chelsea will want to address their poor home form from last season, winning less than 50% of their home games in the Premier League to register just the sixth-best Premier League record on home soil.

The west Londoners will begin the Premier League campaign with a trip to face former manager Frank Lampard and Everton, having lost 1-0 to the Toffees in the same fixture last season.

For the fourth season in a row Liverpool will begin their campaign at home to a newly-promoted side, with the Reds travelling to face Fulham on August 6.

Mohamed Salah will be hoping to continue his strong record on the opening weekend, having become the first player to score in five consecutive opening weekend fixtures last season.

Jurgen Klopp’s side – runners-up last season – face just one of the ‘big six’ in their opening six games, travelling to face Manchester United on the Premier League’s third weekend.

The Merseysiders won 5-0 in last season’s meeting at Old Trafford, but the Red Devils will be under new management this season following the appointment of Erik ten Hag.

Crystal Palace, Bournemouth and Newcastle will all visit Anfield in the opening six games with Liverpool having remained unbeaten on home soil in 2021/22, before a Merseyside derby clash at Everton in early September.

Manchester City are the only team who do not face one of last season’s top six in their first six games of the campaign, but do face potentially testing away trips to West Ham, Newcastle and Aston Villa.

The average position of their first six opponents from last season (13.6) is marginally lower than each of their rivals however, providing Pep Guardiola’s side with a chance to get the defence of their crown up and running early in the season.

Erling Haaland’s arrival has raised the excitement levels and he is expected to make his debut at West Ham on the opening weekend.

His first home game for the club should come against newly-promoted Bournemouth, an opportunity for the forward – who scored 22 goals in 24 league appearances for Borussia Dortmund last season – to open his account at the Etihad.

On paper, Manchester United face the most difficult start to the season among the big six clubs, with their first six opponents including two of last season’s top six.

Erik ten Hag’s reign will begin at home to Brighton on the opening weekend, with the Seagulls having won the previous meeting between the sides 4-0 at the Amex Stadium in May.

United have failed to make a new signing so far this summer, but will hope reinforcements can arrive in time for pre-season after a disappointing campaign in 2021/22.

United have early season clashes with Liverpool and Arsenal at Old Trafford, whilst the Red Devils will need to navigate away trips to Brentford, Southampton and Leicester. In the same six fixtures last season, United won three, drew one and lost twice.

Tottenham will hope to carry a strong end to the 2021/22 campaign into the new season, having won eight of their last 11 league games to secure a top four finish and Champions League football.

Antonio Conte’s side begin the campaign with home clash against Southampton on the opening weekend, before meeting London rivals Chelsea at Stamford Bridge.

Chelsea are the only ‘big six’ opposition Spurs face in the opening weeks, though both Wolves and West Ham will visit north London with ambitions of gatecrashing the European places this season.