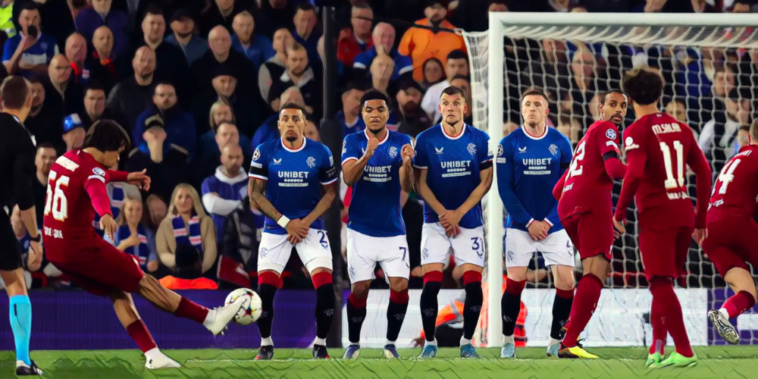 Trent Alexander-Arnold added another special strike to his increasing collection this week, as the Liverpool defender bent home a brilliant free-kick to open the scoring against Rangers.

Alexander-Arnold’s moment of magic set Liverpool on their way to a Champions League win at Anfield, with his set-piece stunner the sixth direct free-kick he has scored for the club.

We’ve decided to look back at each of Trent Alexander-Arnold’s free-kick goals for Liverpool.

Alexander-Arnold’s first goal for Liverpool came in a crucial contest with Hoffenheim, as the Reds won 2-1 in Germany to take a one-goal advantage back to Anfield for the second leg of their Champions League play-off tie.

Liverpool had reached the Champions League’s group stages just once in the previous seven seasons, but the teenage defender took responsibility to step up and curl home a wonderful effort from distance.

The right-back’s goal opened the scoring on his European debut for Jurgen Klopp’s side, who progressed through the tie before a memorable run to the Champions League final.

First of many for Trent Alexander-Arnold 🎯

Liverpool maintained their unbeaten start to the 2018/19 campaign with a 3-0 win at Watford in November 2018, a clash which saw Alexander-Arnold double the visitor’s advantage with his first free-kick in the Premier League.

Mohamed Salah had opened the scoring at Vicarage Road, before Alexander-Arnold took centre stage to guide a laser-like set-piece beyond Ben Foster and double the Reds’ lead.

Alexander-Arnold’s effort was his first at club level for 11 months and followed a first international goal for England, scored during the international break earlier in the month.

Liverpool moved within two points of winning a first top-flight league title in three decades after thrashing Crystal Palace 4-0 at Anfield in 2020.

Alexander-Arnold set the tone for an impressive performance from Jurgen Klopp’s league leaders, as he broke the deadlock with his latest set-piece special.

His powerfully struck strike flew past Wayne Hennessey in the visitor’s goal, before further efforts from Mohamed Salah, Fabinho and Sadio Mane edged the Reds ever closer to the Premier League title.

Alexander-Arnold’s goal was his 30th goal involvement in the Premier League since his debut in 2016, consisting of five goals and 25 assists. It’s just a pity that it came behind closed doors.

Liverpool lifted the title for the first time since 1990 after a thrilling 5-3 win over Chelsea in 2020. It was celebration time at Anfield with the Reds already crowned champions and the pressure-less contest resulted in an entertaining eight-goal affair.

Alexander-Arnold was on the scoresheet with his fifth direct free-kick in Liverpool colours, with Kepa Arrizabalaga reluctant to even dive given the precision and power of the strike. It was the defender’s third direct free-kick in the Premier League, with only Jamie Redknapp (4) having ever scored more in the division at the age of 21 or under.

The right-back also recorded his 13th assist of the season after teeing up Roberto Firmino, breaking his own record for the most by a defender in a Premier League season.

An INCREDIBLE view of a SENSATIONAL @trentaa98 strike 😱@VirgilvDijk knew it was in straight away 👀 pic.twitter.com/P3GVdODQdo

Just one of Alexander-Arnold’s free-kicks has come in a losing effort, as Liverpool crashed to a 3-2 defeat at West Ham during the 2021/22 campaign.

The Reds were looking to set a new club record of 26 games unbeaten at the London Stadium, but came undone in an entertaining contest against the high-flying Hammers.

Alexander-Arnold briefly brought the sides level four minutes before half-time, as he curled home an audacious effort after changing the angle of the free-kick with a short pass into Mohamed Salah.

The critics have been out in loud voice this season for Alexander-Arnold, whose indifferent start to the campaign has seen the Reds right-back come under fire.

An exclusion from the England squad proved headline news, but Alexander-Arnold issued a fine response to his doubters with a brilliant goal in the Champions League this week.

Alexander-Arnold put Liverpool ahead after just seven minutes as he curled a fantastic free-kick over the wall and past Allan McGregor, a goal which set Jurgen Klopp’s team on the way to a much-needed three points.

A perfectly placed free-kick puts Liverpool ahead against Rangers 👌