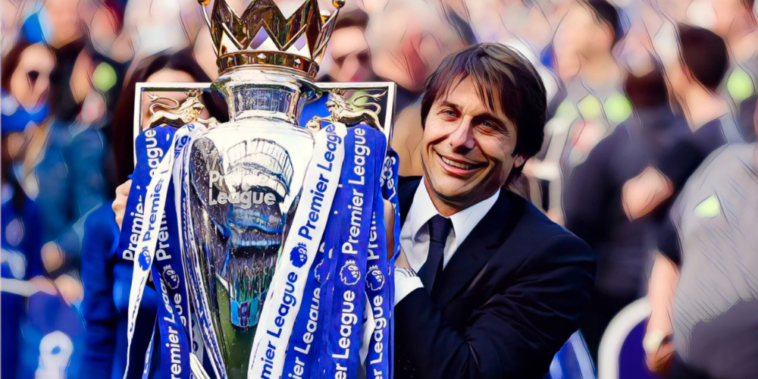 Italy has produced more Premier League-winning managers than any other nation, with coaches from the continent having had huge success in English football.

Antonio Conte is currently overseeing transformation at Tottenham, with the north Londoners on the up and hoping the challenge the Premier League’s best teams this season.

After finishing fourth to secure Champions League football in 2021/22, Spurs have began the new season unbeaten after a bad-tempered draw at Chelsea last weekend.

Spurs have not been crowned champions of England since 1961, but with a world-class manager among their ranks will have ambitions of challenging for the title in the near future.

We’ve decided to look back and remember every Italian manager to have won the Premier League.

Carlo Ancelotti was the first Italian to win the Premier League, having guided Chelsea to the title during an impressive debut season at Stamford Bridge.

Ancelotti arrived with a big reputation having twice led AC Milan to Champions League success, while he delivered on a promise to bring a more attractive brand of football to west London.

Chelsea were crowned champions in free-scoring fashion, as Ancelotti’s side finished just a point ahead of Manchester United in the title race. The club’s attacking football saw Chelsea set a number of records, including becoming the first team to score 100+ goals in a top-flight league season since Tottenham in 1962/63.

🔵 @MrAncelotti took over at @ChelseaFC #OnThisDay in 2009

Chelsea secured the title after thrashing Wigan 8-0 on the final day of the season, before completing a domestic double by beating Portsmouth 1-0 in the FA Cup final at Wembley.

Mancini had won three consecutive Serie A titles at Inter Milan before moving to the Premier League, where he was tasked with leading the next stage of City’s ambitious project.

After ending the club’s 35-year wait for major silverware with FA Cup success the previous season, he guided the Citizens to Premier League success in 2011/12.

In one of the most gripping title races in Premier League history, City went head-to-head with fierce rivals and defending champions Manchester United.

The title was secured with the most iconic moment in the division’s history, as Sergio Aguero’s stoppage-time goal against Queens Park Rangers snatched the championship on the final day of the season. Needing to win to be crowned champions, City trailed 2-1 in stoppage-time before goals from Edin Dzeko and Aguero sparked euphoric celebrations at the Etihad.

Claudio Ranieri immortalised himself in Premier League history after achieving the unthinkable in 2015/16, leading Leicester City to the first top-flight title in the club’s history.

This was not the Leicester side that have since come on leaps and bounds to become regular competitors for European football, but an outfit that needed a great escape just to remain in the Premier League the previous season.

Among the favourites for the drop, the bookmakers priced Ranieri’s Foxes as 5000/1 outsiders to win the title. It did not seem like unfair odds at that time.

Ranieri, however, upset those odds in stunning style. Riyad Mahrez sparkled in a breakthrough campaign, N’Golo Kante became a household name, and Jamie Vardy scored in a record-breaking 11 consecutive games on his way to 24 goals for the campaign.

Despite a squad that cost seven times less than the likes of Manchester City and Ranieri using the fewest number of players in the Premier League, Leicester took to the top in mid-January and never looked back.

Their momentum snowballed all the way into the final weeks of the campaign, winning the title with two games to spare after nearest challengers Spurs dropped points at Chelsea. In the end, it wasn’t even close, as Leicester finished 10 points clear at the top of the division.

Even now, it is an achievement that is hard to comprehend.

Antonio Conte is looking to become the first manager to have won the Premier League with two different clubs, having led Chelsea to title success in 2016/17.

A serial winner at Juventus, he arrived to pick up the pieces of a tenth-placed finish the previous season as Jose Mourinho’s second spell as manager reached an ignominious conclusion.

After an initial adaptation period, Conte’s side hit their groove following a change to his preferred 3-4-3 formation in late September. A humbling 3-0 defeat at Arsenal prompted the tactical tweak and the results were instant.

Chelsea equalled the then-Premier League record for consecutive wins with 13, a run which propelled the west Londoners to the top of the division and laid the foundation for title success.

In his first attempt, Conte won the Premier League title with Chelsea just one season after the Blues finished TENTH.

Conte’s team ended the campaign having set new records for most wins (30), fewest draws (3), fewest home draws (0), and home and away wins against different sides (12). Chelsea’s 93 points was the second-highest total in Premier League history at that time, behind the club’s 2004/05 champions.

Thibaut Courtois led the league for clean sheets (16), while the Blues narrowly missed out on a domestic double after losing the FA Cup final to Arsenal.