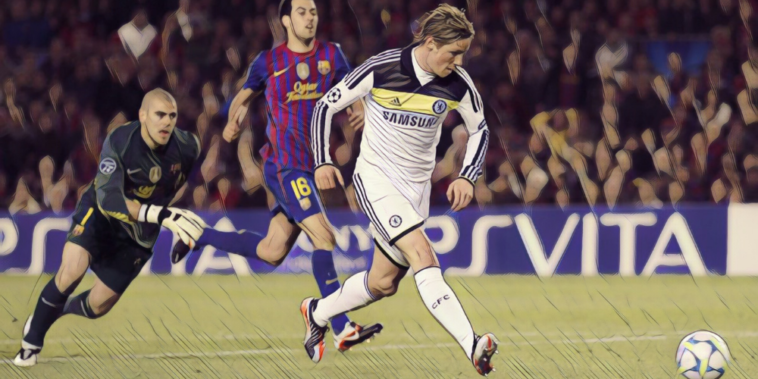 Chelsea are through to the semi-finals of the Champions League for the first time in seven seasons, an aggregate victory over Porto in the last eight setting up a huge showdown with Real Madrid for a place in the final.

The west London side have reached the last four for the eighth time in their history, a record for an English side in the Champions League era.

Ahead of a huge clash with Real Madrid to come, we look back at and remember Chelsea’s previous semi-final encounters.

Chelsea secured qualification to the Champions League during the 2002/03 season following a winner-takes-all showdown with Liverpool on the final day of the Premier League season, a result which paved the way for Roman Abramovich’s transformative takeover of the club.

Names such as Hernan Crespo, Claude Makelele and Joe Cole arrived in a summer of big business, providing Chelsea with a side capable of competing with Europe’s elite.

Claudio Ranieri’s side reached the semi-finals after eliminating an Arsenal side in the midst of an unbeaten league campaign in the last eight, before facing surprise package Monaco.

The two sides exchanged early goals in the principality as Crespo cancelled out Dado Prso’s opener, before Monaco took control of the tie after scoring twice late on through Fernando Morientes and Shabani Nonda, despite being reduced to 10 men following Andreas Zikos’ red card.

The return fixture saw Chelsea twice take the lead before being pegged back in a 2-2 draw, Monaco progressing to the final 5-3 on aggregate where they were beaten by Jose Mourinho and Porto.

Chelsea reached the semi-finals for the second successive season under new management in 2004/05, Jose Mourinho taking charge at Stamford Bridge after guiding Porto to Champions League success the previous season.

The last four drew Chelsea together with Premier League opposition, facing a Liverpool side some distance adrift of the newly-crowned champions of English football domestically.

Rafael Benitez’s side had upset the odds to reach this stage, however, including a brilliant defensive display against Juventus in the last eight, and the organised Reds held Chelsea goalless during the first meeting in the capital.

The return saw Chelsea greeted by a raucous atmosphere at Anfield, one which reached fever pitch following a controversial goal from Luis Garcia after just four minutes, the referee adjudging the ball had crossed the line despite strong protests from the Blues.

Liverpool held on despite a glorious late chance for Eidur Gudjohnsen, securing their place in a European Cup final for the first time in two decades.

Eliminated 4-1 on penalties after 1-1 draw on aggregate A.E.T.

Chelsea met Liverpool at the semi-final stage once again during the 2006/07 side, the two teams playing out one of the great English footballing rivalries during the mid-2000s.

Despite Chelsea’s huge success domestically, the Reds often proved frustrating opponents and got the betters of their rivals on the European stage once again.

Joe Cole’s winner had provided Chelsea with a 1-0 lead to protect ahead of the return at Anfield, but Daniel Agger’s early goal following a free-kick routine on Merseyside levelled the tie.

The two sides were unable to be separated throughout the course of two fixtures and an additional 30 minutes of extra-time, the clash heading to penalties in a high-pressure shoot-out for a place in the final.

Arjen Robben and Geremi saw their efforts saved by Pepe Reina, Liverpool converting all four spot-kicks to book a final meeting with AC Milan in Athens.

For the third time in just four seasons, Chelsea faced Liverpool in the last four of the Champions League and it proved third time lucky for the Blues, progressing to a first ever final following a 4-3 win on aggregate.

John Arne Riise scored a 95th-minute own goal for Liverpool to hand Chelsea the advantage following the first leg at Anfield, a priceless away goal that cancelled out Dirk Kuyt’s opener.

The return fixture proved a thriller as Didier Drogba scored twice to send the west London side through, opening the scoring at Stamford Bridge before Fernando Torres’ strike sent the clash into extra-time.

Frank Lampard – starting just six days after the passing of his mother – scored a penalty put Chelsea ahead in the added period before Drogba scored a third, though Ryan Babel’s stunning strike from distance set up a nervy finish.

Chelsea held on, progressing to an all-Premier League final against Manchester United in Moscow, with the club’s semi-final monkey finally off their back.

Eliminated on away goals after 1-1 draw on aggregate

One of the most controversial semi-final encounters in recent memory, Chelsea were left heartbroken and aggrieved as Barcelona snatched a dramatic place in the final.

Chelsea had defended impressively to secure a goalless draw in the first leg of their semi-final showdown in Catalonia, restricting the Spanish side to few clear-cut opportunities despite the hosts dominating possession.

Michael Essien’s wonder goal opened the scoring after just nine minutes in the return fixture and looked to have been enough to see Chelsea progress, until Andres Iniesta’s stunning stoppage-time strike prompted wild celebrations from the visitors.

An animated and furious Didier Drogba – who had earlier been substituted through injury – was cautioned after branding the officials a ‘f****** disgrace’, whilst Chelsea manager Gus Hiddink even suggested match-fixing following the ‘the worst refereeing’ he had ever witnessed.

Chelsea exacted revenge on Barcelona for their controversial exit three years earlier in 2011/12, upsetting the holders to progress 3-2 on aggregate and reach a second Champions League final.

Didier Drogba gave the west Londoners a precious first-leg lead after a 1-0 win at Stamford Bridge, the hosts withstanding heavy pressure from the reigning champions to emerge with a narrow advantage.

The return saw Chelsea produce one of their greatest European nights after upsetting the odds to progress, their fortunes appearing bleak after goals Sergio Busquets and Andres Iniesta put Barcelona ahead in the tie – either side of John Terry’s red card.

Ramires exquisite chip put the 10-man Blues ahead on away goals just before half-time, before Lionel Messi missed a penalty as Barcelona pushed forward relentlessly in search of a winner.

Chelsea had just 28% of the possession and conceded 22 efforts on goal from the hosts, but assured their place in the final in stoppage-time as Fernando Torres raced away on the counter-attack to book a final meeting with Bayern Munich.

Robert Di Matteo’s side emerged triumphant following the clash with the Bundesliga side at their home stadium in Munich, becoming the first London side to win the Champions League after shoot-out success at the Allianz Arena.

Chelsea will hope their upcoming semi-final showdown will prove a more positive experience than their last meeting with opposition from Madrid, losing 3-1 on aggregate to Atletico Madrid during the 2013/14 season.

The first leg had ended goalless in the Spanish capital with Chelsea favourites to progress at Stamford Bridge, their chances strengthened as Fernando Torres opened the scoring against his former side.

Atletico hit back, however, and were level just before the break, Adrian Lopez’s goal putting the Spaniards ahead on away goals.

Diego Simeone’s side made sure of their place in an all-Madrid final against Real Madrid as Diego Costa scored from the penalty spot, a 3-1 victory completed as the impressive Arda Turan fired home.

The result moved Atletico into their first European Cup final for 40 years, though their run ended in heartbreak following an extra-time defeat to their city rivals in Lisbon.