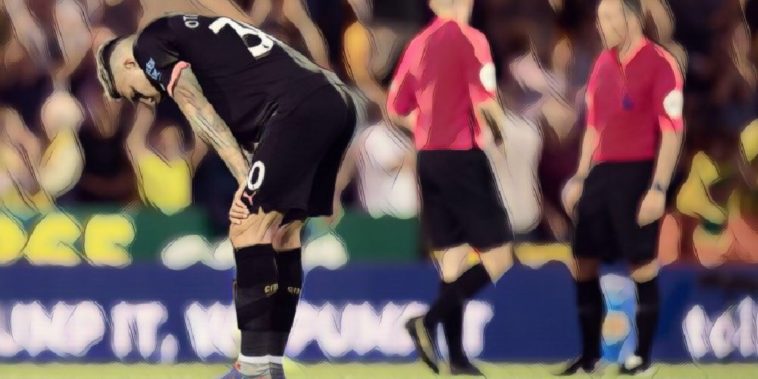 It’s safe to say that Jamie Redknapp was less than impressed by Nicolas Otamendi for his role in Norwich’s crucial third goal in the shock 3-2 win over Man City on Saturday evening.

With the Canaries having gone 2-0 up, Man City talisman Sergio Aguero had hauled the champions back into the game on the stroke of half time – a goal that looked like it would be the catalyst for a second-half turnaround on the way to collecting another three points.

However, with Aymeric Laporte ruled out for a number of months, Man City’s new defensive partnership of John Stones and Nicolas Otamendi combined to contribute to one of the biggest defensive howlers of the season so far.

The Barnsley born defender played a tame pass across the box to his Argentine counterpart, who – seemingly unaware of any danger whatsoever – dallied on the ball, allowing himself to get robbed by Emiliano Buendia, who had the simplest of tasks of squaring the ball to the in-form Teemu Pukki, who duly made it 3-1.

Outfield Manchester City players have made 10 errors leading to goals in the Premier League since Pep Guardiola took charge:

“For the third goal, it’s incredible talking about top level players making mistakes like this,” Redknapp said in his punditry role for Sky Sports.

“Otamendi takes a touch, he’s got his arms up in the area. What is he complaining about? Any Sunday league footballer wouldn’t have done that.

“Guardiola’s got a difficult job. He’s got to find a way of getting these two to play together.”

Speaking about the defensive partnership as a whole, Redknapp was surprised with Man City’s lack of intensity.

“They weren’t at it. I talk about intensity, getting the ball back, putting teams under pressure.

“They didn’t perform in the manner we normally associate with them. It was only in the last ten minutes that they came life.

“The second goal shows how much they’re going to miss Aymeric Laporte. The chemistry between Otamendi and Stones isn’t there. With Laporte they have that stability.”