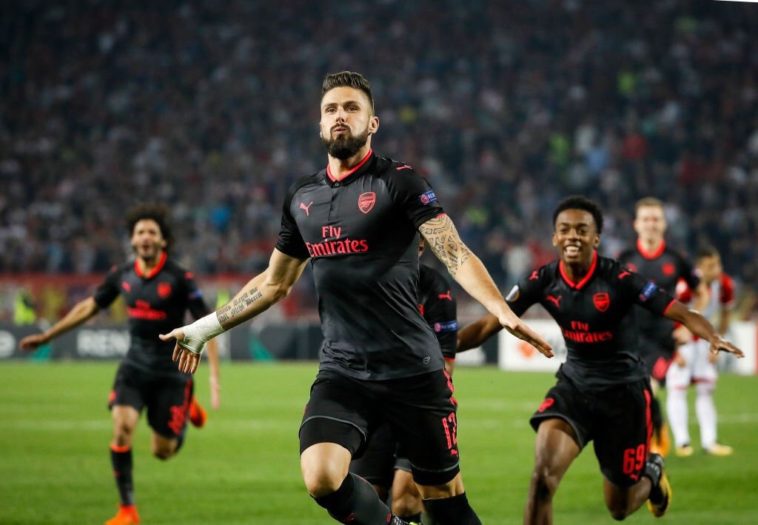 In a ferocious atmosphere at the Stadion Rajko Mitic, in front of 50,000 fans, Arsenal made it three wins out of three in Europa League Group H.

Theo Walcott had two early chances as Arsenal dominated in the early periods of the game but he was unable to convert them. In the first instance he was put through on goal by Jack Wilshere, but he couldn’t get his shot away.

The second time around Walcott had a great opportunity from a free kick when the ball came into his path but, despite being in plenty of space, his tame left-footed shot was saved by the feet of Red Star Belgrade keeper Milan Borjan. Walcott squanders chances like this far too often when he really should be putting the ball in the back of the net.

Red Star had the best chance of the match in the 27th minute. Richmond Boakye met a cross as the near post but Petr Cech expertly kept it out. From the resulting corner Boakye headed against the crossbar.

Five minutes later, Red Star were in again after poor defending from Ainsley Maitland-Niles. Nemanja Radonjic was found at the back post and his volley was well saved by Petr Cech before Reiss Nelson blocked the rebound.

Arsenal improved in the second half which wasn’t difficult given how poor they were in the first. They had a really good chance to break the deadlock with players lining up in the box to put it away. Joe Willock laid it off to Walcott who fluffed the chance and then Giroud’s strike was no trouble for Borjan.

Nelson, one of the only Arsenal players who looked interested in winning the game, had a fierce shot parried away by Borjan. Mohamed Elneny, playing in a three-man defence, nearly gifted Red Star a goal. His blind back pass across Arsenal’s goal was intercepted by Radonjic, but Cech pushed the shot over the bar. Another let-off for Arsenal.

In the 80th minute Arsenal were handed the advantage. Milan Rodic was shown what seemed like a harsh second yellow card after going up for a header with Francis Coquelin.

Five minutes later, Arsenal made their man advantage pay. Walcott played a one-two with Wilshere who flicked the ball back to Walcott who headed it across goal. Olivier Giroud connected with the header with his back to goal and produced a sublime and improvised over-head kick into the top corner. An absolutely fantastic team goal which was reminiscent of THAT goal v Norwich.

It certainly wasn’t one of Arsenal’s best performances but they got the three points and maintain their 100% record in the competition.