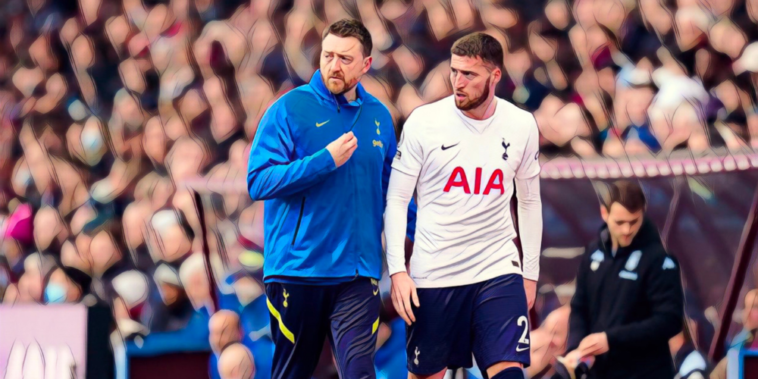 Antonio Conte has provided an update on Matt Doherty’s season-ending injury and says the defender’s absence is ‘really bad news’ for Tottenham.

Doherty sustained a serious knee injury during Spurs’ 4-0 win at Aston Villa last weekend with the Republic of Ireland international set to miss the remainder of the Premier League season.

The 30-year-old had impressed in recent weeks with two goals and three assists in his last seven league appearances and Conte admits the absence of the wing-back is ‘bad news’ for Spurs as the club push for Champions League qualification.

“The Doherty injury is really bad news for us, you know well the improvement in our team and it’s a pity because to lose a player like him for the rest of the season is no good for us,” Conte said at his pre-match press conference ahead of the club’s clash with Brighton this weekend.

“Also (Japhet) Tanganga and (Oliver) Skipp are not available, this bad news for us. On the other hand, I think now we have the solution to cope with this situation until the end of the season.

“There’s only seven games to go, (Ryan) Sessegnon is ready and is in the squad, Emerson (Royal), (Sergio) Reguilon, we have to try to cope in the best possible way until end of season. To lose these players is not easy for us.”

Conte says Spurs will get ‘different opinions’ before deciding whether Doherty needs surgery, but confirmed the defender will not feature again this season.

“The first visit with the doctor, he said he can recover without surgery, but it is important to have different opinions and then to make the best decision, talking about seven/eight weeks to recover and for this reason his season has finished and it’s a pity he was an important player for us.”