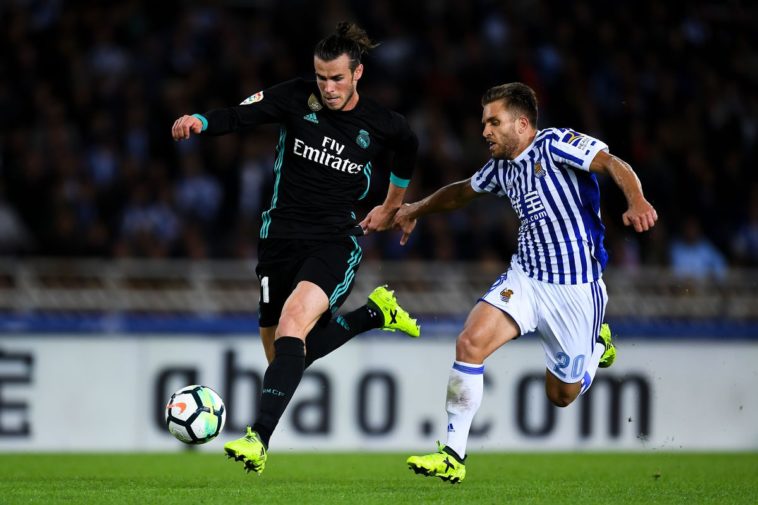 A strong Real Madrid performance got them back to winning ways in the La Liga after a couple of disappointing matches. Gareth Bale and youngster Borja Mayoral were among the goals for Los Blancos.

Real came to the Anoeta with a fair few key players missing, Ronaldo, Marcelo, Kroos, all out. The stadium has a special place in the Real fans’ heart, as the club’s phenomenal 73 game streak started right there, a year and a half ago.

Before the game, Sociedad were unbeaten, winning all of their three games in the league. Their good start had the fans hopeful for an upset, but it didn’t pan out that way.

Youngster Borja Mayoral, who came in for the injured Karim Benzema had a great game, scoring from a Ramos assist to put Real ahead in just inside 20 minutes. The 20 year-old was in the senior starting eleven for the first time ever, but looked like a seasoned professional in front of goal.

Sociedad left-back Kevin Rodrigues had an interesting game too, scoring for both teams. First he scored from a volley, which could’ve been saved, but ended up tricking Keylor Navas. Next, just eight minutes later, Mayoral’s cross attempt went off Rodrigues into the goal.

Mayoral did the majority of the work in the goal, running from the half-way line all the way into the box. Rodrigues could not be blamed either, as he could’ve done nothing to stop the own-goal.

Sociedad also had a good few chances to score, but their front three was a huge disappointment. To put things into perspective, Kevin Rodrigues, a left-back, had the same number of shots as the entire front three.

Gareth Bale, who has been the target of many jeers over the past few months, silenced his critics with a wonderful goal. After receiving a lofted pass in his own half, the Welshman went on a crazy sprint, leaving everyone in the dust, and finished the run with a smooth chip shot.

Bale has had a good start to the season, something he would’ve wanted to assure himself of a spot in the first team.