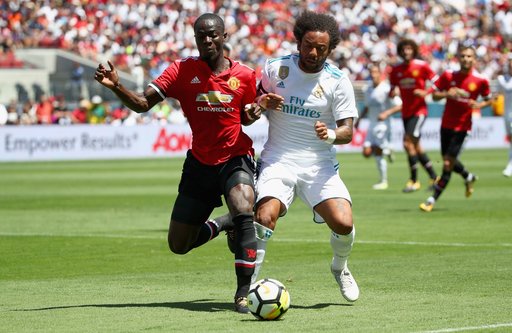 Manchester United beat Real Madrid on penalties after the match ended 1-1 in this pre-season friendly in Santa Clara, California.

Jesse Lingard opened the scoring for United in the first half, before a Casemiro penalty levelled the score in the second. Here are five things we learned from this encounter.

Andreas Pereira has a big part to play

Pereira was deployed as part of a midfield three, alongside Marouane Fellaini and Michael Carrick. His energy and link up play with the team were great to see from a Manchester United perspective and he should certainly see plenty of involvement for yer Reds this season.

In a game of little quality, Anthony Martial provided one standout moment. In a move reminiscent of his debut goal against Liverpool, the young Frenchman beat about four Real Madrid players, before sliding the ball to Jesse Lingard who slipped the ball into the back of the net to give United the lead.

However, these moments of brilliance are too few and far between. He has the potential to be one of the worlds best, and needs to get involved more, rather than drifting in and out of matches.

His penalty in the shootout was dreadful too.

£31million, yet Victor Lindelof is yet to impress in a Manchester United shirt on this tour.

The tackle on Theo Hernandez that gave away the penalty was nothing short of shocking. The Swede arrived about five yards too late, before swinging a leg out to boot the left back half way up the legs. At the moment, he doesn’t look like he should be the first choice centre back alongside Eric Bailly.

After a summer chasing Nemanja Matic, Eric Dier, Radja Nainggolan and Marco Verratti, its clear to see why. United deployed evergreen midfielder Michael Carrick in the first half as the holding midfielder as they dominated a close to full strength Madrid side.

Ander Herrera replaced him in the role at half time, but was swiftly withdrawn after picking up an injury. After that, against Real Madrid’s kids, United struggled. Pogba was non existent for large parts, as he had to get involved with the defensive side of the game, only highlighting the importance that Mourinho signs a new midfielder.

Both teams need to practice penalties

After 10 penalties, only three hit the back of the net in what was probably the worst penalty shoot out in history. Kiko Casilla and David de Gea saved two each with the other three not even hitting the target.

Man United fly to the East Coast to play Barcelona in Washington while Real Madrid face Man City in LA. The teams play against each other again in just over two weeks, as the host head to Macedonia for the UEFA Super Cup.