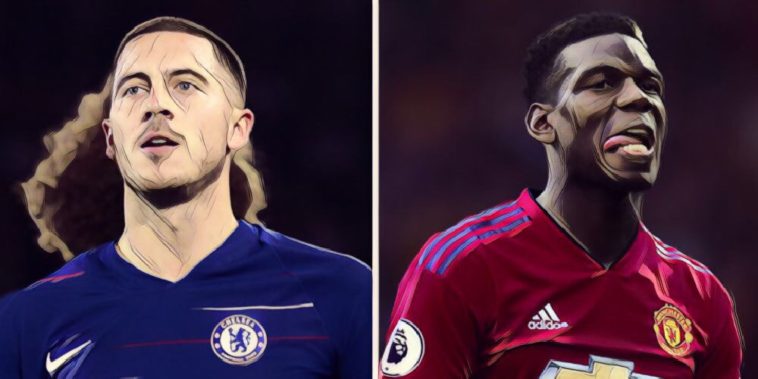 Real Madrid are claimed to be confident that they can conclude the big money signings of Eden Hazard and Paul Pogba this summer.

Hazard has long been a target for the 13 time European champions, with the Belgian frequently describing a potential move to the Bernabeu as ‘a dream’.

After seven highly successful years at Stamford Bridge however, it seems as though the Chelsea number 10 could finally make the move to the Spanish capital.

With Hazard’s current Chelsea contract having just over 12 months to run, it is thought that Blues bosses are reluctantly willing to sanction a move rather than lose their star asset for free next summer.

While Hazard is widely praised in all sections of the media for his often mesmerising displays, it is a different story for Manchester United’s Paul Pogba, whose inconsistent displays regularly polarise opinions among fans and pundits alike.

Despite enjoying his best ever goalscoring season, scoring 13 Premier League goals and providing nine assists, the Frenchman frequently has his mentality and commitment questioned, with Gary Neville aiming a thinly veiled barb in the midfielder’s direction last week.

Reports today have said that Pogba’s agent, Mino Raiola, has refused to discuss new terms to extend his clients deal at Old Trafford, and Sky Sports are now reporting that Real Madrid are ‘confident’ of securing his signature this summer, with Zinedine Zidane a self-confessed fan of his compatriot.

Both deals are likely to set Real Madrid back in the region of £100 million as they look to rebuild their squad after a largely disappointing campaign.