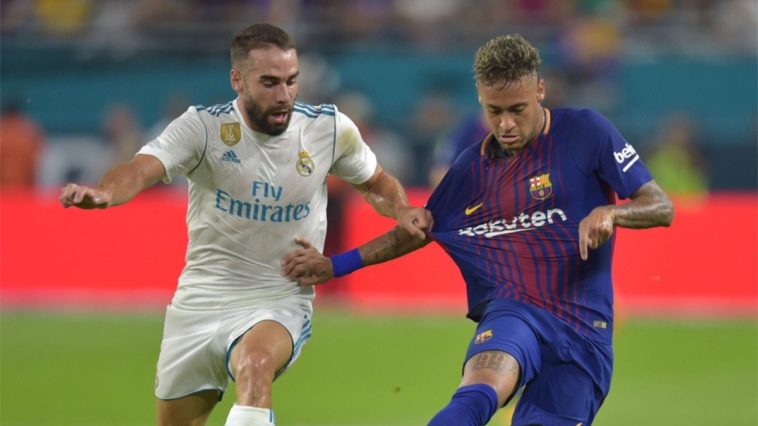 Real Madrid suffered a third consecutive pre-season defeat, while Barcelona lifted the ICC in the Clasico at Miami. Here are five things we learned.

1. Bale’s position is in jeopardy

Gareth Bale, Real’s record signing has to prove his worth after a string of disappointing displays in pre-season. The Welsh winger spent the majority of last season out on injury, and didn’t impress much when he was fit. His spot was taken by Isco, who played phenomenally well, being a major contributor to Real’s double.

Marco Asensio, who can also play at right-wing (Bale’s natural position) has been very impressive and is one of the most exciting prospects in world football.

Other than that, Bale has been heavily rumoured to leave Real. Apparently, Kylian Mbappe will only join Real if one of the BBC leaves, and with Ronaldo not leaving, Benzema showing no signs of going, Bale looks like the likeliest to leave.

2. Keylor Navas is the main man for the job

There has been a lot of speculation about the arrival of a new goalkeeper at the Bernabeu. Los Blancos have been linked to De Gea, Courtois and Donnarumma so far, making Keylor Navas work twice as hard. The Costa Rican stopper performed very well towards the end of last season, making a host of important saves, and has been good in pre-season too.

After going off at 0-0 vs Man City, Navas made a few decent saves yesterday, keeping the score respectable. This good form has ended all doubt of Navas being unsuitable for the job.

3. Kovacic should not be let go

Mateo Kovacic is one of the many players being touted to leave Real Madrid due to play time. The Croatian midfielder is still only 23 and should definitely be given more chances in the starting XI. Kovacic has done well when playing for Real and offers a fair bit to the team.

The player scored a lovely goal in the Clasico and was arguably Los Blancos’ best outfield player, asserting he has potential to be a future starter.

4. Barcelona are in better shape for the Supercopa

The Spanish Supercopa, which will take place over two legs, the first being on the 14th of August. Barcelona have won all three of their pre-season tour, while Real have lost all three. Other than the results, Real’s defence has been very leaky, conceding a total of eight goals in three games. Not good.

Barcelona have also been looking much sharper attack wise, with Neymar, Messi and Suarez, all coming to the party. The cause of Real’s lack of sharpness in front of goal has to be the absence of Cristiano Ronaldo.

Neymar is close to completing a big money move to PSG, (€222 million), and this has Barca searching high and low for a replacement. The skillful Brazilian set up two goals and missed a few glorious chances, showcasing how much Barcelona will miss him.

Neymar has been vital to the Blaugrana ever since he joined, and finding a replacement for him, will be next to impossible.

What did you notice from El Classico USA? Let us know in the comments.