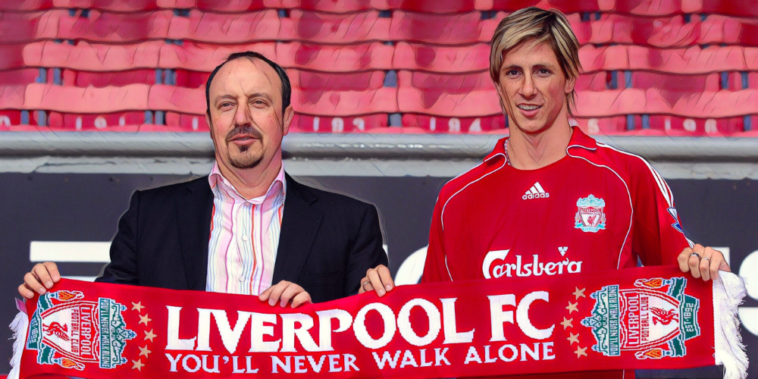 Liverpool are closing in on the signing of Darwin Nunez from Benfica, in a deal which could reach a club record £85m with add-ons.

The Uruguayan forward has emerged as one of the most coveted centre-forwards in Europe after a prolific campaign in the Portuguese Primeira Liga last season, scoring 34 goals across all competitions to attract interest from the continent’s elite.

Liverpool have now agreed a deal to sign the 22-year-old as Jurgen Klopp evolves his forward line at Anfield, with the Reds set to part with a record-breaking figure for his services.

Ahead of his impending arrival, we’ve looked back at Liverpool’s past record signings and rated each of them.

Phil Babb became Liverpool’s record signing in September 1994, with the defender having impressed across two seasons at Coventry and with his performances for Ireland at that summer’s World Cup.

Babb became Britain’s most expensive defender when arriving at Anfield in a £3.6m deal and spent six seasons with Liverpool, racking up 170 appearances across all competitions for the Reds.

The nineties, however, coincided with a difficult period for Liverpool during the first decade of the Premier League as the club – and their famed ‘Spice Boys’ in which Babb featured – struggled to replicate former glories.

Babb won just a solitary League Cup during his time with the club before moving on to sign for Sporting Lisbon in 2000.

Liverpool broke the British transfer record to sign Stan Collymore from Nottingham Forest, with the forward having fired Forest to promotion before starring with a 22-goal season on the club’s Premier League return.

Collymore began with a stunning winner on debut against Sheffield Wednesday and after a period of adaptation struck up a fine understanding with Robbie Fowler, the duo combining for 55 goals across all competitions during the 1995/96 season.

Collymore had all the attributes to be one of the Premier League’s finest forwards but off-field issues prevented him from building on a successful first season at Anfield.

He spent just two seasons with Liverpool and scored 28 goals in 64 league appearances, before the emergence of Michael Owen and fall-outs with management saw him sold on to Aston Villa.

Liverpool’s transfer record lasted five seasons before Emile Heskey became the club’s most expensive purchase, with the Reds spending £11m to bring in the powerful forward from Leicester.

Heskey had shone for a Foxes team who reached three League Cup finals in four seasons, before arriving at Anfield to add a hulking presence to a forward line already containing Michael Owen and Robbie Fowler.

Heskey’s first full season saw him thrive alongside Owen as Gerard Houllier’s side won a cup treble, scoring 22 goals in all competitions as the UEFA Cup, League Cup and FA Cup all arrived on Merseyside.

His initial seasons with Liverpool saw Heskey shrug off defenders with a brutal ease, though the goals failed to flow as freely following his first season as he became a facilitator for those around him, with Owen the most notable beneficiary of his selfless side.

He made 223 appearances for Liverpool and scored 62 goals, before moving on to sign for Birmingham City following the arrival of Rafael Benitez as manager in 2004.

The exits of Michael Owen and Emile Heskey in the summer of 2004 saw Liverpool search for centre-forward reinforcements, securing the £14.5m record signing of Djibril Cisse from Auxerre.

The deal had been agreed before the sacking of Gerard Houllier as manager, with Rafa Benitez inheriting a forward who had scored 26 league goals in Ligue 1 the previous season.

Cisse marked his debut with a goal at Tottenham, but his first season was marred after he suffered a horrific leg break at Blackburn in October.

He returned ahead of schedule to play his part in Liverpool’s 2005 Champions League success, before scoring twice as the Reds won the UEFA Super Cup against CSKA Moscow.

Cisse’s second season ended with 19 goals in all competitions and FA Cup success – with the Frenchman scoring in the final against West Ham – but he struggled to convince Benitez and was allowed to leave on loan for Marseille the following season.

Fernando Torres had emerged as a homegrown hero at Atletico Madrid and captained the side as a teenager, with his performances piquing the interest of Europe’s elite before a £20.2m move to Liverpool in 2007.

Torres made an immediate impact to become the first Reds player since Robbie Fowler in 1996/97 to score 30 goals in all competitions, setting a new Premier League record for most league goals (24) in a debut season by a foreign player.

The Spanish striker became an adored figure on the Kop as the goals continued to flow freely, establishing himself as one of Europe’s best forwards across his three-and-a-half seasons on Merseyside.

Torres scored 81 goals in just 142 appearances for Liverpool in all competitions, but the club’s inability to turn promise into silverware led to his acrimonious exit to Chelsea in a £50m British transfer record deal in January 2011.

Despite winning the Champions League, FA Cup and Europa League in west London, he never again replicated the electricity of his performances in a red shirt.

Luis Suarez arrived as a partner for Fernando Torres, but ended up succeeding the Spaniard as Liverpool’s talisman after a whirlwind deadline day saw the latter exit for Chelsea.

Suarez marked his debut with a goal against Stoke, before developing over the following seasons into one of world football’s finest talents.

The Uruguayan international reached 30+ goals in consecutive campaigns for the Reds, including a sensational 2013/14 campaign in which he was named as the PFA Players’ Player of the Year and FWA Footballer of the Year.

Suarez was recognised after a Golden Boot-winning campaign in which he scored 31 league goals in 33 games, in addition to providing 12 assists as a free-scoring Liverpool side finished as Premier League runners-up.

Controversial and captivating in equal measure during his three-and-a-half seasons at Anfield, he moved on to sign for Barcelona in a £75m deal in 2014 and won four league titles and the Champions League among his honours at the Camp Nou.

Liverpool broke their transfer record twice on the same day in January 2011, reinvesting the fee received for Torres into the signing of Andy Carroll.

Carroll had fired Newcastle to promotion before starting the Premier League campaign in fine form, scoring 11 goals in 19 league games for the Magpies to earn a £35m move to Liverpool.

Carroll proved an awkward fit during his time at Liverpool however, scoring just six league goals in 44 appearances for the club.

A late FA Cup semi-final winner against Everton and brace against Manchester City were highlights, but Carroll’s move to Merseyside is regarded as one of the Premier League’s great transfer flops.

Mohamed Salah was viewed as a gamble upon his arrival at Liverpool in 2017, with the Egyptian having struggled to make an impact during a previous Premier League spell at Chelsea.

Any doubts were soon erased following a record-breaking first season with the Reds however, as Salah won a PFA Players’ Player of the Year and FWA Footballer of the Year double.

Salah broke the record for a 38-game league season with 32 goals to win the division’s Golden Boot, whilst his 44 goals across all competitions is a single season Premier League record he shares with Ruud van Nistelrooy.

The goals have continued to come at a prolific rate for Salah, who has added a further two Golden Boot accolades and a second PFA Players’ Player of the Year and FWA Footballer of the Year double to his list of individual awards.

Few talents have had as big an impact on Liverpool’s modern success, with Salah having scored 156 goals in 254 games for the Reds. That period has coincided with a clean sweep of major honours under Jurgen Klopp, including a drought-breaking title success in 2019/20.

Virgil van Dijk’s record move to Liverpool was another which raised eyebrows once confirmed, as the Reds made the Southampton star the most expensive defender in football history.

Van Dijk’s impact has been immeasurable since signing for Liverpool however, cementing his status as one of world football’s finest centre-backs during a period of silverware success at Anfield.

His first full season ended with Champions League success, whilst Van Dijk became just the third defender in the Premier League era to win the PFA Players’ Player of the Year award.