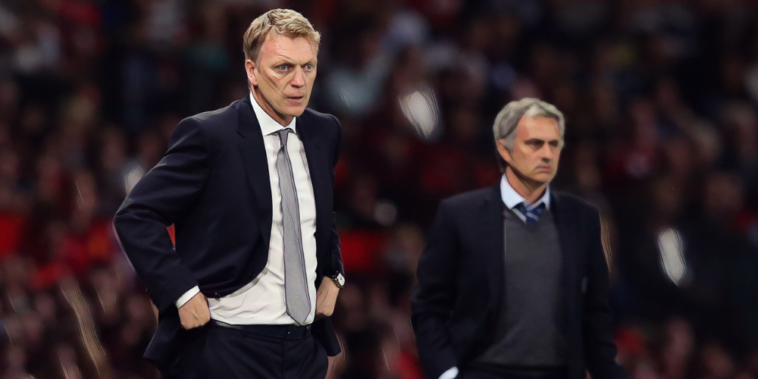 Fans’ favourite Solskjaer arrived at Old Trafford amidst a whirlwind of nostalgia, but it soon become apparent that the likable Norweigan was not the man to lead the Red Devils back to the summit of English football.

It’s been almost nine years since Sir Alex Ferguson’s retirement from the game, a period which has been both eventful and turbulent as United have struggled for success in the post-Fergie era.

Man United have failed to win the Premier League title since Fergie’s final season in charge and their next appointment will be the fifth permanent manager tasked with filling the Scot’s sizeable shoes.

Moyes was dubbed ‘The Chosen One’ after being hand-picked by Ferguson to become his successor, the Scot having won an admirer in his illustrious compatriot after over a decade of service at Everton.

Moyes had been named as LMA Manager of the Year on three occasions during his time on Merseyside, ensuring Everton performed above all expectations – including securing Champions League qualification in 2004/05 – despite operating on a comparatively shoestring budget to the division’s leading sides.

Having decided to remove much of Ferguson’s successful staff in favour of familiar faces from Everton, Moyes then struggled in the transfer market and saw anticipated deals for names such as Cesc Fabregas, Thiago Alcantara and Gareth Bale fail to materialise.

His sole signing of the summer was Marouane Fellaini from his former club, a player whose style divided opinion and who became symbolic of what proved a failed regime.

Moyes failed to win over the senior players in the dressing room and poor performances against the division’s leading sides – United took five points from a possible 24 against Liverpool, Chelsea, Manchester City and Arsenal – saw his reign ended after just 10 months.

Moyes has since rebuilt his reputation post-Old Trafford, but he paid the price for a poor start as Ferguson’s successor, with domestic cup exits to Swansea and Sunderland disappointing for a squad he inherited with champion’s status.

It’s difficult to give Moyes anything less than a low score, though he was afforded less time than those who came after him in the hot-seat.

United turned towards top-level experience with the appointment of Louis van Gaal in 2014, the Dutchman arriving with a wealth of experience after winning league titles with Ajax, Barcelona, AZ and Bayern Munich, in addition to guiding the former to Champions League glory.

The investment saw United secure a top-four finish and return to the Champions League, though Van Gaal’s side finished a huge 17 points adrift of champions Chelsea and the Dutchman’s pragmatism was widely criticised.

Louis van Gaal on expectations being too high at Manchester United. pic.twitter.com/V1vTWRHNNP

Di Maria faded following a bright start and departed for PSG at a loss after just one season, with Van Gaal’s second campaign seeing United miss out on Champions League football for the second time in three seasons.

FA Cup success in 2017 – beating Crystal Palace in extra-time at Wembley – was the highlight of his reign, but he was sacked just two days after their win over the Eagles as a high-profile replacement became available.

Jose Mourinho was lauded as ‘the best manager in the game’ by Ed Woodward upon his appointment at Manchester United in 2013, arriving with an esteemed reputation as a two-time Champions League winner.

Three league titles won across two spells at Chelsea – alongside a host of honours won on the continent – indicated Mourinho was a man who could deliver silverware to the side, with his first season ending in a League Cup and Europa League double.

United backed the new manager with the world-record signing of Paul Pogba from Juventus, alongside deals for the likes of Eric Bailey, Henrikh Mkhitaryan and Zlatan Ibrahimovic as Mourinho sought to build a squad capable of challenging Europe’s best.

Despite adding the Community Shield to make it three trophies within 12 months at Old Trafford, he was unable to significantly close the gap on the Premier League’s leading sides with his first two seasons ending in a sixth-place finish and distant runners-up placing behind runaway champions Manchester City.

Mourinho memorably declared the second of those league finishes as one of his greatest achievements in football – indicating a lack of backing – in what represented the start of a toxic end towards his reign at Old Trafford.

He was sacked mid-way through his third season in charge, having spent almost £400m on new players with little signs of progress, departing in December 2018 with the Red Devils sixth in the division and closer to the relegation places than the league leaders.

United’s haul of 26 points from their first 17 Premier League games was their worst tally at that stage of a season since 1990-91, whilst the club had fallen 11 points adrift of the top four.

As so often has been the case with Mourinho, his exit was spectacular as things turned sour, but the Portuguese coach brought the most recent silverware to Old Trafford and boasts the best win percentage (58.33%) of all the post-Ferguson appointments.

Five of the worst defeats of Jose Mourinho’s managerial career

The Norwegian was initially brought in to steady the ship following the toxicity that had surrounded the end of the Mourinho era, beginning with an eight-game winning streak in his role as caretaker manager and winning 14 of his first 17 fixtures.

That run persuaded the Red Devils to hand Solskjaer – unproven managerially at the highest level – the reins on a full-time basis, with the club icon overseeing steady if unspectacular progress over the following seasons.

He guided the Red Devils to successive top-four finishes for the first time since Ferguson’s retirement, though fell short at the final hurdle with a succession of semi-final and final defeats, including losing the 2021 Europa League final to Villarreal.

Whilst improving the previously negative atmosphere surrounding the club deserves credit, Solskjaer continually made mistakes that made him inadequate for the role at Old Trafford.

His failure to implement a clear identity on the side in almost three seasons was telling, whilst his refusal to rotate and make brave calls proved costly. Solskjaer left the struggling Harry Maguire and Aaron Wan-Bissaka in the side in recent weeks and ignored calls to give the overlooked Donny van de Beek and Jesse Lingard minutes, even given a calamitous run of results performances.

Solskjaer’s continued reference to the Ferguson era also became tedious, whilst there was a sense from some sections that the 48-year-old became the equivalent of the Premier League’s cat with nine lives, often finding a result just as the pressure began to substantially mount.

Having inherited a squad that finished second in the previous season, Solskjaer spent more money than any other Premier League manager without demonstrating a clear ideology or path towards success.

21 – Through 12 games of the Premier League season, Manchester United have conceded 21 goals; they’ve never previously conceded more at this stage of a season in the competition. Wheel. pic.twitter.com/YleGFnzYuI

Solskjaer was perhaps handed greater goodwill given his exploits at the club as a player, but for all the positives he leaves without silverware and following a wretched recent run, United having conceded 21 goals in 12 league games this season – with only the bottom two sides in Norwich and Newcastle having conceded more.

Out of his depth in comparison to his Premier League peers, it has come as little surprise to see him sacked with the Red Devils in need of fresh direction.